How Free-Willy became an Apex Predator

Killer Whales (Orcinus orca) occur throughout the world’s oceans, from the tropics to the arctic waters. They are extremely social and use sound to navigate, communicate, and capture prey types, including fish, reptiles, invertebrates, mammals and birds. In many cases, certain groups of orcas form pods that are specialized in hunting selected prey types, giving them the reputation as ‘the wolves of the ocean’. Killer whales display most of their unique abilities while hunting, and by looking at a few of their spectacular methods, we attempt to emphasize these magnificent mammals’ profound abilities.

The Norwegian herring hunt is said to be one of the most amazing hunting spectacles observed throughout the ocean. Every winter approximately 40 billion (10 million tons) of spring-spawning herring overwinter in layers at depths of 160-370 m (525-1,214 ft), forming one of the largest animal aggregations on Earth. More than 500 killer whales come together in Lofoten in northern Norway and form groups of 22-46 individuals.

Each group dives down to 160-180 m (525-591 ft), which is almost the limit of an orca’s capacity, and forces tens of thousands of herring approximately 150 m vertically, out from their deep water refuges, towards the surface where the whales have the upper hand. They accomplish this unbelievable feast known as ‘digging in the deep’ through coordinated actions, which involve complex social interactions between the killer whales.

This allows them to successfully split large schools of fish into smaller aggregations through carousel feeding; this includes the releasing of bubbles or flashing their white abdomens to densely pack the smaller groups of fish. This allows the orcas to slap the dense balls of herring with their massive tails, stunning or killing up to 15 herring with a single blow. 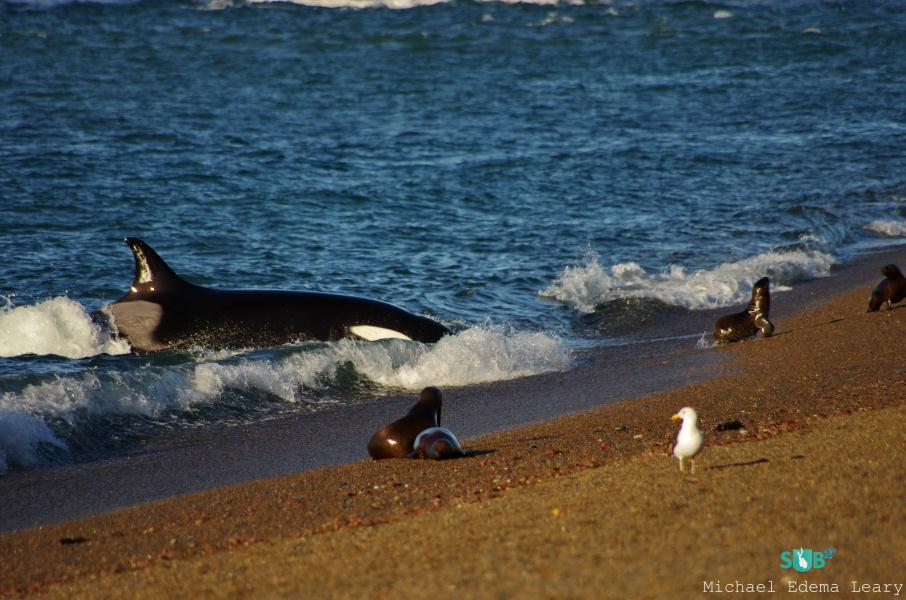 Sharks and stingrays also fall victim to the cunning Killer whale. Orcas have been spotted inducing tonic immobility, which refers to a natural state of paralysis, in Great White Sharks by holding them upside down for 15 minutes causing them to suffocate to death, and in stingrays by attacking them in an upside down orientation and then flipping right side up; rendering the string ray helpless as the orca grabs an easy meal.

The intelligence of this species continues to amaze, as they have the second heaviest brain on earth after the Sperm whale. Orcas have skillfully taken advantage of ice-associated prey such as penguins and seals that frequently drift on floating ice (floe) in the Antarctic Ocean through teamwork and coordinated actions.

Initially they form small pods of 5-7 individuals, although in rare occasions killer whales have been documented attempting this method solo. They start off ‘spy-hopping’ beside the ice floe, on which the prey is laying; this refers to sticking their heads out of water, alongside the ice as if to peek at their prey. This is followed by ‘wave-washing’: a portion of the group of killer whales submerge and move about 15 m away from the ice floe and swim in a synchronized coordinated-manner directly towards the ice and pass underneath it.

This creates a significant wave that tips the ice floe causing the orca-induced wave to wash over it, breaking the ice and reducing it's size (which will require another attempt) or washing the prey off the floe into the jaws of the awaiting orca on the other side.

Beaching, one of their most famous methods of acquiring prey on land, is also one of the most dangerous for the orca if not performed correctly. They swim into the shallows and temporarily beach themselves to grab hold of prey and then ‘wiggle” themselves back into deeper water. This method can be fatal, which is why it takes up to 40 years for a mother orca to teach her calf how to apply this method to its benefit!

Finally, the largest animals on the planet also fall victim to the strength and resilience of a pod of orcas. Although a group of 5 or more may attack a healthy adult whale, they prefer to target younger weaker whales. They initially chase the mother whale and her calf until they are worn out. Then they attempt to separate the mother from her calf by swimming in between them and pushing them apart. Once they are separated the orcas jump on top of the youngster and prevent it from surfacing for air, drowning it.

Killer whales are extremely intelligent, although it’s hard to measure intelligence when their behavior differs so greatly from humans. Their ability to imitate, learn, memorize, teach, and apply teamwork has been proof enough for most. They are magnificent animals and although there have only been a few reports of attacks on humans- none of which have been fatal- they are still a force of nature that is not to be taken lightly.

These outstanding predators with their ingenious problem solving abilities, speed, strength and teamwork, although depicted as friendly, should be admired but at the same time respected and feared. Free-willy is not your friend.