The Izu island chain south of Tokyo is full of surprises for the keen scuba diver. A range of life is on offer from dolphins, rocky dive sites and coral to turtles, macrolife and shoals of fish. The island of Miyakejima is the 6th in the chain and formed by volcanic eruptions and lava flows.

In early July 2000, it came back to life and forced the evacuation of all residents. The aftermath is still plain to see in this quiet and remote part of Japan. The eruptions turned out to be the most severe in 2,500 years, and today Miyakejima feels somewhat desolate and a tad gloomy, covered in dead black trees and rock.

In 2002 the late Jack Moyer, a marine biologist who lived on the island and surveyed the water, noted that huge typhoon waves and the flow of the warm Kuroshio current had helped remove volcanic mud and debris, but the marine life had indeed been affected.

On a happier note however, he noticed that some fish were faring well and that the fauna off some of the bays were in excellent condition.

May is when the diving off Miyakejima is at its most beautiful, as the Kuroshio current flows northeast, bringing warm temperatures, high productivity and lots of marine life. This is when divers have the best chance of some quality time with the Bigfin Reef Squid (Sepioteuthis lessoniana) or Aori-ika in Japanese, spawning just off the island.

Of course, sightings are not always guaranteed, but as long as you regularly check the position of the Kuroshio current and time your dives right, you'll encounter a paradise of good visibility and a major squid get-together.

The Bigfin Reef Squid is a fascinating creature. With eight arms and two tentacles, it mostly feeds on crustaceans and small fish and gathers near shores in areas with rocks or coral reefs. It's said to have the fastest recorded growth rates of any large marine invertebrate but sadly only lives for a short time, a bit less than a year. 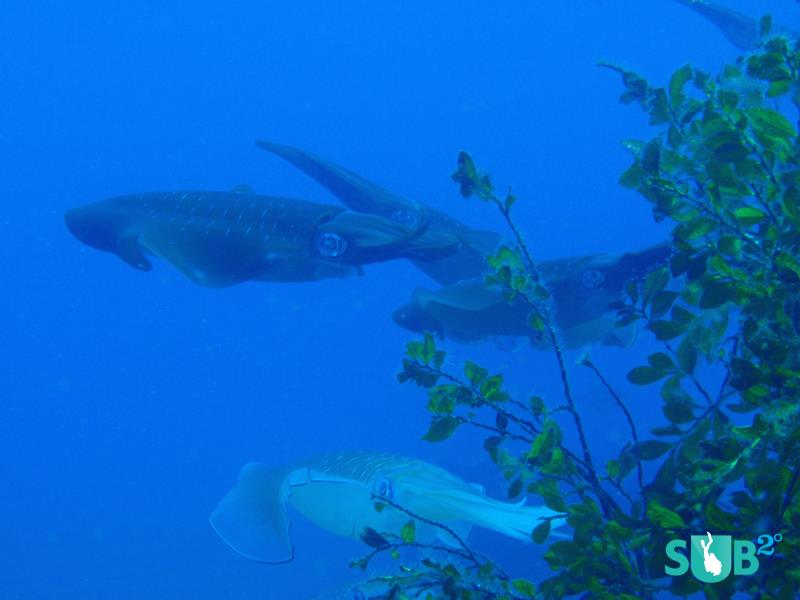 It's usually found in the temperate and tropical waters of the Pacific and Indian Ocean, although some sightings have been observed in the Mediterranean as well.

These slender and elongated creatures squirt ink at anything that might be considered a danger and most interestingly, use rapid and vivid changes in body colour via chromatophores to convey information on any possible threats or food sources, while shows of domination such as chasing and biting other individuals have also been observed.

Because it has no means of detecting sound other than perceiving vibrations, its large inquisitive eyes provide a great sense of sight to communicate and to perceive what is happening in its environment.

The Bigfin Reef Squid is not on any list of threatened or endangered species list, and as its population is robust with a wide distribution, it is unlikely that it will become endangered anytime soon.

What You Can See

As the water warms up off Miyakejima around late May and early June, the bigfin reef squid gathers for courtship, mating and egg-laying, moving inshore and into shallower areas.

Okubohama is one of Miyakejima's main dive spots where the squid can be observed. It's an easy beach entry for divers as they don their gear and walk down a pebbly beach into the calm waters and out towards a huge rock on the right hand side. The journey then continues following a left turn from the rock and a swim over a big stretch of sand with not much else below. 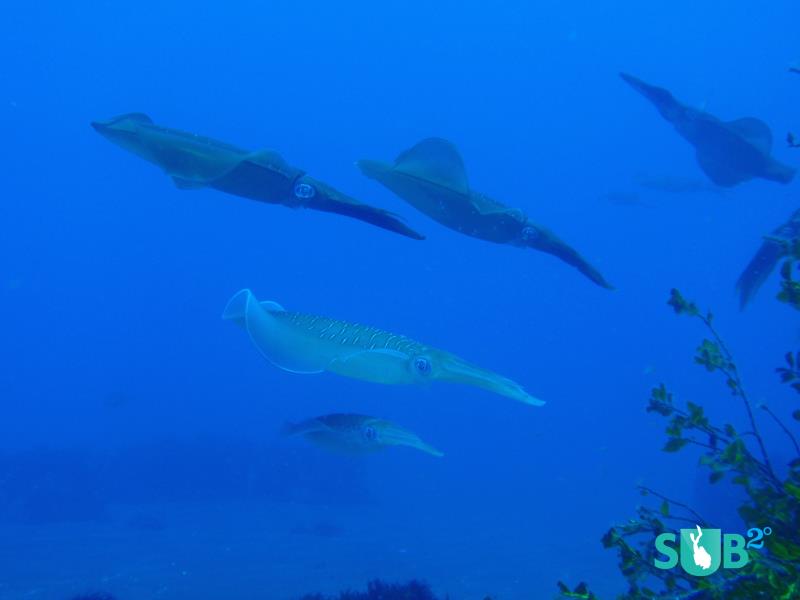 A bunch of tree branches comes into view at around 14m, surrounded by brown-lined puffer fish and moray eels. Local fishermen and dive operations often deliberately place some tree branches in the water to provide a place for the squid to lay their eggs and to give divers better access to the area as well as hopefully more guaranteed squid sightings.

The courtship and mating happens high up in the water column. During this time the male can become aggressive and will challenge other males to determine who will breed with the females. Once male-female pairs have been formed, the squid slowly swim towards the egg-laying area to deposit their eggs, while divers can rest near the surrounding rocks and watch from afar.

When the female is ready to lay, the male, which is darker, shields her from view and protects her all the time. The female deposits the eggs under the watchful guard of the male, but any approach from an unpaired male and he again becomes agitated, flashing warning colours and even flaring out his legs if he is so inclined.

When the squid finish mating they die, which no doubt explains the presence of the many moray eels hidden among the branches and the brown-lined puffer fish waiting to grab a bite out of any squid (dead or alive) that they can find.

Finally, rushing towards the squid, swimming madly and letting camera flashes go off repeatedly, are all bound to make the squid vanish into thin air. Despite diving in a big group, it's possible to get close to the squid but it does take time and patience.

It's also worth nothing that there are two mating cycles, the first running from May to early July and the second in August/September. The squid have also been observed in other dive spots closer to Tokyo and there appears to be some variation in their size and population numbers.

A Guide to Scuba Diving in Japan

Overview of Scuba Diving in Ryukyu Islands, Okinawa and Yonaguni