Whale sharks are intelligent, gentle giants that migrate into the Caribbean waters of Belize from April to June. Snappers (dog snapper, mutton snapper, cubera snapper, etc) spawn in great numbers off Belize during these months, usually during the full moon periods, attracting the hungry whale sharks that feed at night. It is often a hit-and-miss when guessing their arrival. Even the experienced dive instructors cannot predict which moon and which location the whale sharks will be from year to year. Whale sharks are filter feeders, feeding on the snapper's suspended fish spawn. They migrate from great distances to mate.

Amazingly, it is safe for scuba divers and snorkelers to swim and play around with these huge and curious creatures. When you spot them in the water, they are huge and intimidating but surprisingly graceful and non-threatening. Some catch a ride on the larger whale sharks and reportedly, some of the younger whale sharks are so curious that they will actively engage with human swimmers. It is a real privilege to be able to swim with the largest fish in the world.

Whale sharks are the largest living fish species on the planet and also the largest living non-mammal in the world. Whale sharks are not whales at all; they are the largest shark, and one of three filter feeding sharks including the basking shark and megamouth shark. The whale shark's genus and species is, Rhincodon typus, which is the sole species within the family Rhincodontidae, originating some 60 million years ago. Whale sharks feed on fish spawn, algae, plankton, krill, and crab larvae among other organisms they can filter. It is beautiful to swim with the giants and watch them flow through the water and take in the food that sustains their huge bodies. 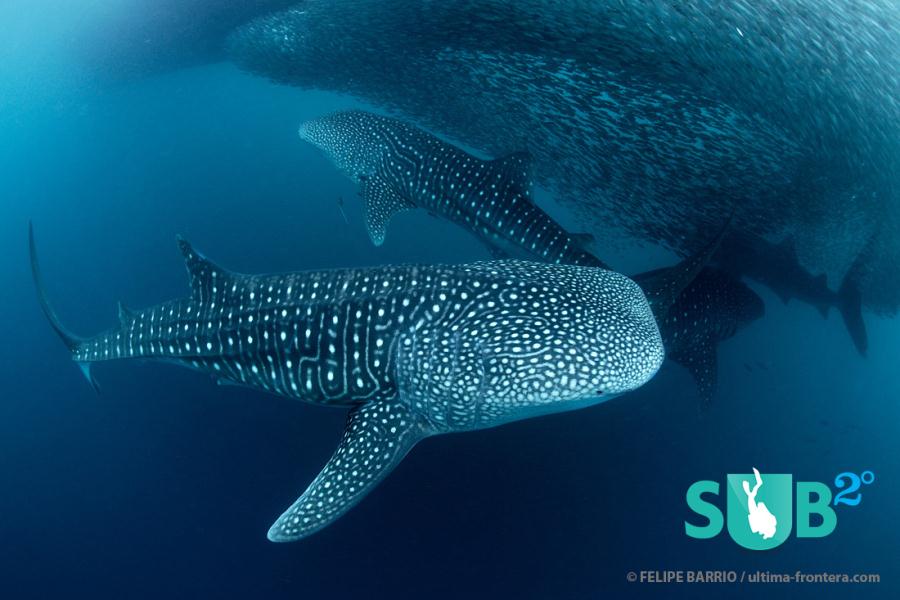 The largest confirmed length of a whale shark is 41.5 feet but there have been multiple reports of whale sharks measuring 45-50 feet. They can easily live for 70 years, and many of the individual whales that swim off Belize are reportedly the same ones that return each year. Whale sharks inhabit all of the tropical and warm seas of the globe and travel in the open sea.

The most popular places to dive with the whale sharks of Belize are Gladden Spit and Silk Cayes Marine Reserve, an area about 25 miles off the coast from the town of Placencia, south of Belize's three coral atolls. These sites are popular dive sites and famous for whale shark sightings. There is a wall that slopes to about 150 feet then drops off into the abyss, and along this wall is a popular spot to see the whale sharks. Most dive shops recommend diving down to around 60 feet to scuba along side the sharks. Snorkelers can also get close encounters when the whale sharks come up to the surface to feed then plunge down again and again.

Ambergris Caye in the north of the country is another popular place to arrange to swim with whale sharks. Many dive shops throughout Belize and Mexico offer specific dive trips specifically centered on actually getting in the water with the whale shark. The local dive captains know the typical areas were the snappers spawn and when the best chances to see the majestic giants are. Even after the spawning periods late in the summer, whale sharks are still commonly spotted off Belize.

Overview of Scuba Diving in Ambergris Caye and Northern Belize

Overview of Scuba Diving in Glover's Reef and Southern Belize

Overview of Scuba Diving in The Blue Hole and Turneffe Atoll

Preparing for your first dive