On the reefs of the Pacific, twilight marks the beginning of the mandarinfish courtship dance. A male begins dancing, and if he’s desirable, an interested female will join. Just before the sun sets, the two fish will rise up out of the reef together to mate, cheek-to-cheek.

Mandarinfish (Synchirophus splendidus) are one of the ocean’s most colorful fish.

Named after the brightly colored robes of the Imperial Chinese Mandarin, these fish are a mazy pattern of vivid blue, green, pink and yellow. Mandarins are one of 182 species of dragonets, but are by far the most colorful. 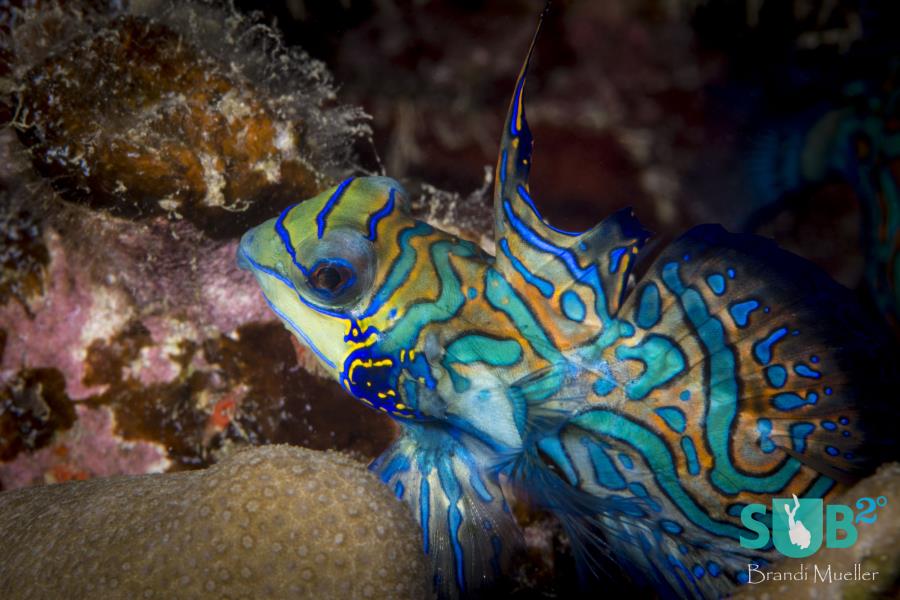 Mandarins are found in the western Pacific as far north as the Japanese Ryukyu Islands to Australia, and live in protected, often shallow, inshore reefs. Popular places for divers to see them include Palau, Yap, the Philippines, and Indonesia. The tiny fish are usually only 2-3 inches long and are active all day in the reef, foraging for tiny crustaceans and other invertebrates living in the coral.

Usually daytime feeding takes place far inside the coral reefs, so only a flit of blue or green can be seen. But at night, everything changes.

An hour before sunset, mandarin activity increases and you can spot them out in the open on the reef. The larger males, identified by their long, pointed dorsal fin, will attempt to court smaller females. Mandarins flit about the reef, rapidly pulsating their fins almost like hummingbirds- which are just as pretty and as difficult to photograph- and crawling on small bits of reef with their hand-like forward pectoral fins. 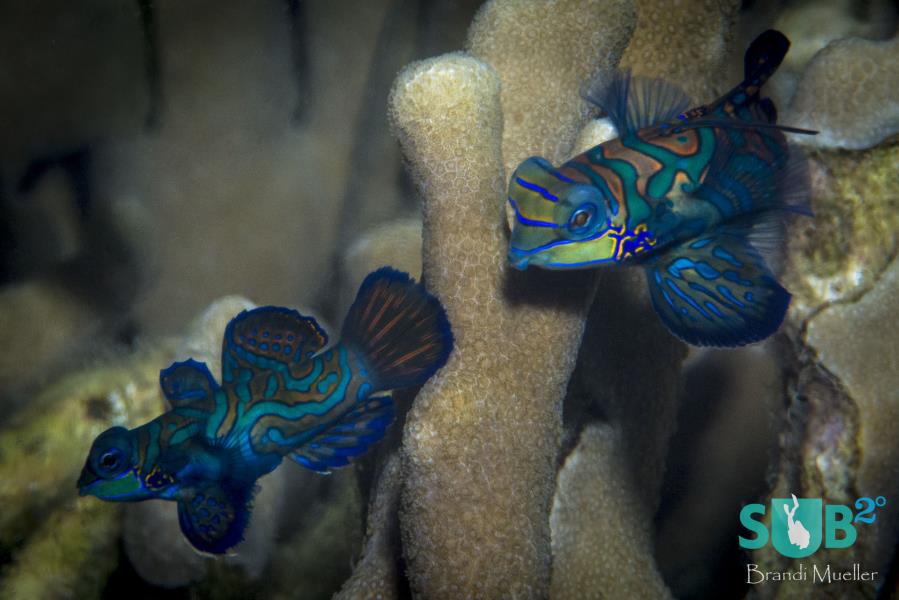 Activity increases as sunset approaches, and males can be seen slightly chasing a female, which obliges him by letting him chase her for a bit, stopping briefly to watch him, and then letting him chase her again. If all goes well, just as the sun sets, the female will rest on the male’s pelvic fin and the two will rise up above the reef a few feet, cheek-to-cheek. This can happen a few times, rising up and then returning to the reef for a chase, and then rising up again. Eventually, if all goes well, the two will rise up and simultaneously release their eggs and sperm, which fertilize in the water column and drift down into the reef to eventually hatch the next generation. 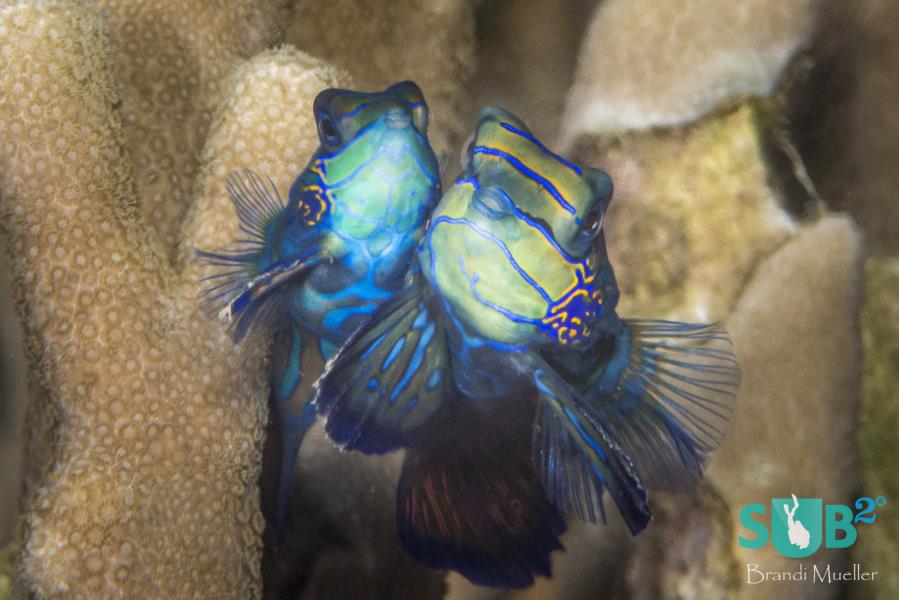 How to See Them

To see mandarinfish mate, divers have to be in the right place at the right time, and -as always- have a little luck.

The first step is to show up about an hour before sunset to a coral head known to have mandarins. Find a female (the smaller fish without the long, pointed dorsal fin) and watch it. As the sun starts to set, hopefully a larger male will come out and start the courtship dance.

It’s vital to keep your eyes on the pair, as they will dart in and out of the reef. When it gets too dark to see without a flashlight, the two will rise a few feet out of the reef to release their eggs and sperm.

They get scared and stop courting if there is excessive movement, lots of bubbles, or lots of light. Some dive shops require all flashlights to be covered in red plastic, as they seem to be less bothered by red light than bright, white light.

It is best to try and hold as still as possible, and sit and watch. Beware of scorpionfish, one of the only known predators of mandarins, as they like to sit and wait for them to mate and then eat them as they rise out of the reef!

Mandarinfish are one of very few ocean fish that lack scales. Instead, they have a slimy skin that is coated in mucus and smells terrible. This protects them from skin parasites and also makes them taste terrible, further protecting them from predators. Their bright coloration also signifies to predators that they don’t taste good.

Their blue color is also unique in the vertebrate world, as they are one of only two species (the other is another dragonet) that have the blue colored chromatophores called cyanophores. Chromatophores are organelles in cells that contain color pigments and reflect light. Blue is a rare color overall, but all other cases of blue coloring are due to thin-film interference of light, which makes the animal appear blue, but it isn’t actually blue.

Mandarinfish are threatened due to their beauty. They are a popular aquarium fish, and there are a few cases of mandarins breeding in captivity, therefore almost every mandarin in a tank was taken from the wild. They are also very hard to care for, and many end up dying soon after being introduced to tank life.

Like all the fish in the ocean, they are also threatened by reef destruction, climate change, and pollution. Their shallow, in-shore habitats are often the first to be dredged for coastal development or lost through dynamite fishing in certain countries of Asia. 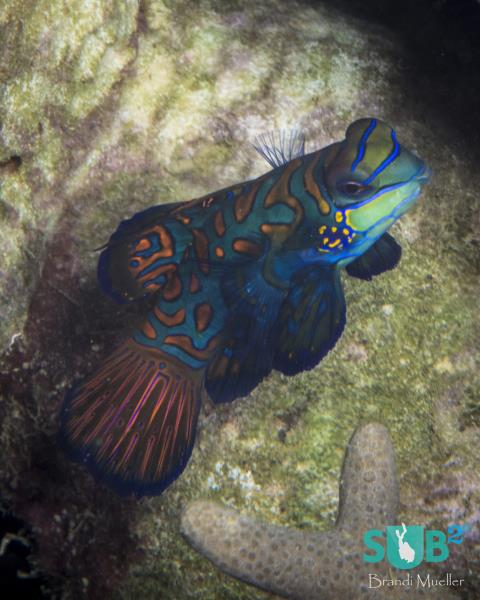 The mandarinfish is an exciting fish for any diver to see, and is definitely worth a twilight dive to spot their vibrant colors and hopefully a glimpse of a pair mating.

Have you ever seen the Mandarin Fish?

Going Deep and Dark - Penetrating the Wrecks of Truk Lagoon