Home Humpbacks of the Silver Bank
2
6

The North Atlantic humpback whale population makes a yearly journey south from their summer feeding waters of New England, Newfoundland, Greenland, and Iceland. They swim over 2500 miles to the Silver Bank, 90 miles from the Dominican Republic, to mate, give birth, and raise their offspring. In these shallow waters they spend their winter, and several liveaboards, including Aggressor Fleet’s Turks and Caicos Aggressor II, offer week-long trips to snorkel with the humpbacks of the Silver Bank.

The Dominican Republic is the only country in the world that issues a limited number of permits to snorkel with humpbacks. After many years of visiting the Silver Bank, the captains, crews, and researchers have come up with methods to protect the whales and provide the best experiences for both the whales and those of us who want to swim with them. Weeklong charters to the Silver Bank Sanctuary provide excellent chances to see the humpbacks both above and in the water. 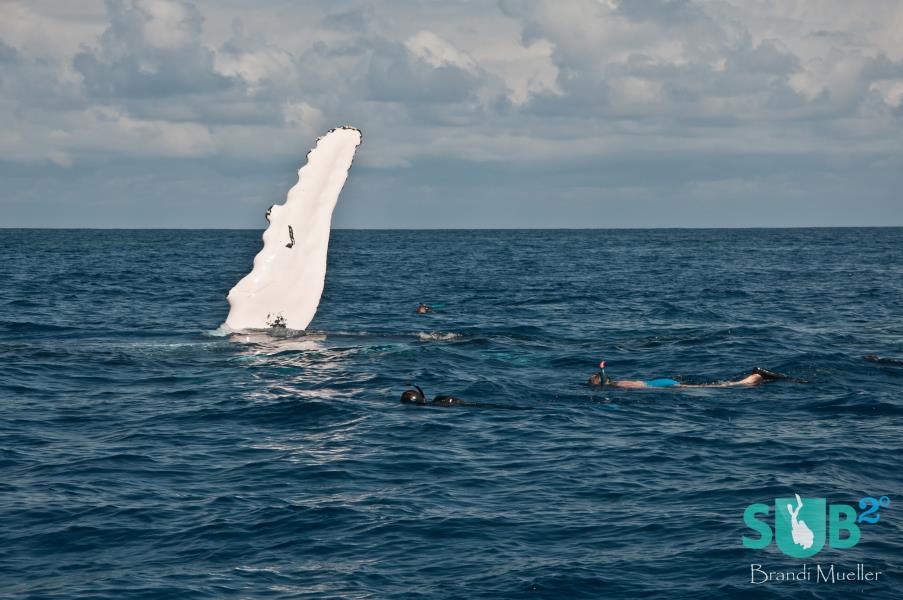 Scuba diving is not allowed in the Silver Bank because the whales seem to be disturbed by bubbles, as well as fast movements such as free diving. The whales are also constantly moving and it takes longer to get divers and their gear in and out of the water, which could delay an encounter.

Most in-water encounters take place with females and their calves. Adult humpbacks breathe about every 20 minutes, but newborns need to breath as often as every three minutes. Usually the mother will stay in one spot, with her calf resting below her peck fin, and the baby will come to the surface for several breaths before she does. This makes it easy to see where the mother and calf are, and to stay with them.

By being calm and still in the water (as little splashing as possible) snorkelers often won’t disturb the whales and if the mother stays comfortable, encounters can sometimes last for hours. The calf will come up every few minutes and check out the snorkelers, then go back down to mom.

Often the baby will come right up to the line of snorkelers and swim by, checking out every single person before going back down. Curious calves may hang out on the surface longer than normal, playing around the snorkelers and sometimes giving them a show of peck slaps and even breaches. 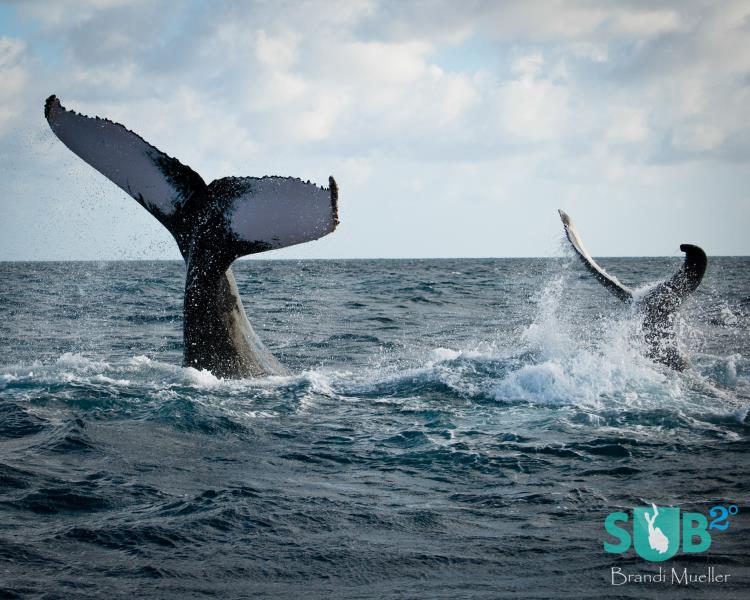 Some encounters occur with a mother, calf, and male escort who marks his territory to mate with the female. Other common in-water encounters often happen with sleeping whales. They don’t move very far, usually hovering in one place, ascending to take a breath around 20 minutes, and then descend back down to the same spot.

Male humpback whales sing and their song can carry from miles away. By just by putting your head in the water at the Silver Bank, many different voices of whale singers can be often be heard. Occasionally a male singer is found and in-water encounters can happen. Singers are usually vertical in the water with their heads down. If you are close, the sounds can be so loud that they seem to vibrate through your body.

Topside activity in the Silver Bank is also worth the visit. Surface behaviors include peck slaps, where the whales slap their peck fins (thick arms) on the surface repeatedly, probably as a means of communication. When a whale dives deep it sometimes does a fluke dive and displays its whole tail.

Spy hops occur when the whale sticks its head fully out of the water, which is thought to be a means of looking around at the surface. And of course, there is the famous breach, when a whale launches its whole body out of the water and twists, landing on its side and creating a huge splash. 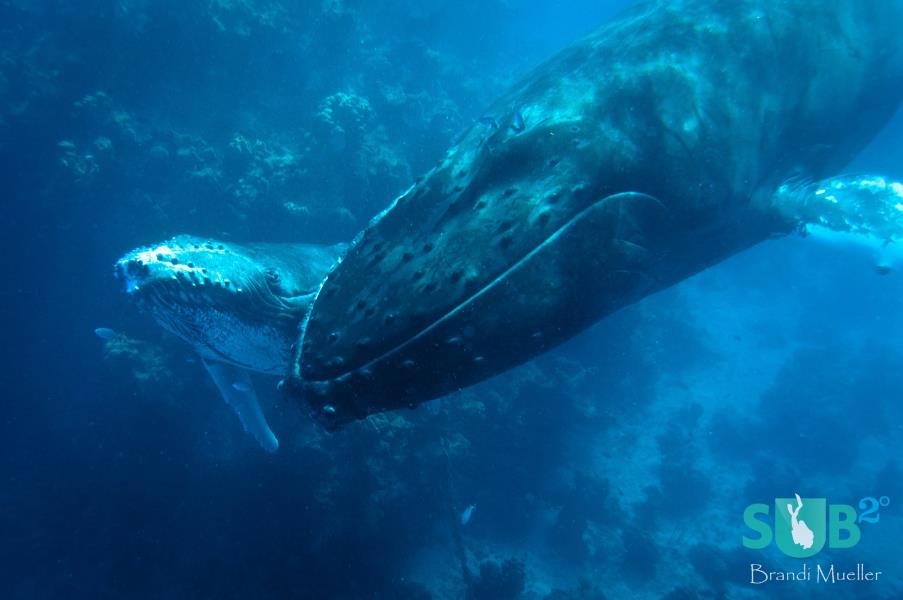 Mating occurs at the Silver Bank and competition for females is common. Most females have an escort male with her, who will not leave unless another or group of males challenges him. Several males can be competing for a female, and there can be vicious fights with breaching on top of each other and fin or peck slapping one another in very exciting and sometimes bloody battles.

Small boats allow guests to get very close to this action for fantastic photo opportunities. However, there are no in-water encounters during these activities, as it could be dangerous to snorkelers, and the males usually move too quickly to keep up with in the water.

My favorite topside behavior is when a mother is teaching her calf new skills. The mother will demonstrate a breach or tail slap and the baby responds by trying to do what mom did. This can happen over and over again, with a baby trying to breach dozens of times, usually while getting visibly tired and with breaches becoming less powerful as time goes on. 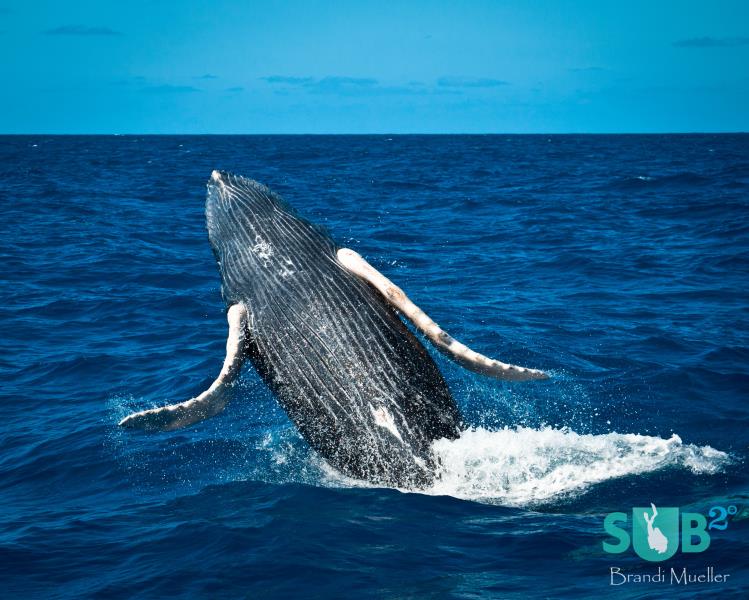 Seeing humpback whales is an amazing experience. Each encounter is different and you never know what will happen, how long it will last, or where it’s going to be. Whales are wild animals, and even if they are supposed to be at a certain place at a certain time, it's never guaranteed what you’ll see. A bit of luck is always involved in having amazing ocean encounters.