You strain your eyes trying to see what your dive master is pointing out. Along the bottom, a tiny, flat, brightly colored object moves slowly. Looking closer, you make out what might be nothing more than a piece of leftover ribbon from a wrapped present. But it’s moving. As it continues to slide along you notice two slight puckers on the end moving forward, almost like little ears perking up. Back on the boat, you ask your dive master what that tiny thing he pointed out was? A flatworm. 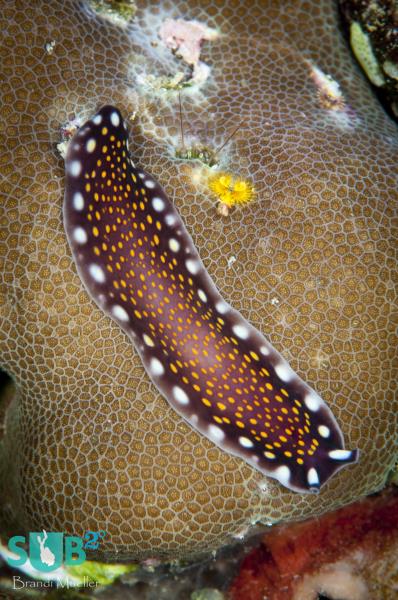 There are over 20,000 species of flatworms (Phylum Platyhelminthes) and at least 4,500 of those are marine flatworms. Found in every ocean, they are beautifully colored, with a size range from just a few millimeters up to several inches long. Evolutionarily simple, the flatworm has no body cavity and no specialized respiratory or circulatory organs. This means they use diffusion to pass oxygen and nutrients through the body, and they only have one body opening, which serves both to consume food and expel waste products.

Most flatworms are carnivorous and feed on slow moving animals. They can turn into ferocious predators: wrapping its body around its prey, entangling it using its slime, and then pinning it to the ground with its entire body.

Flatworms have no actual eyes; instead they have “ocelli”, which are eyespots that can distinguish light and the direction it is coming from. The tiny black eye spots can sometimes be seen on the flatworm’s surface, and some species can have multiple pairs all over the body.

The gliding motion of flatworms is due to the use of hair-like cilia on their underside. They can beat rapidly to allow them to move rapidly. They can also propel themselves into the water column and swim or float in the current using a muscular motion, which appears to ungulate their edges. This can be really neat to see, as they look like waving ribbons or the skirts of a dancing flamenco dancer. 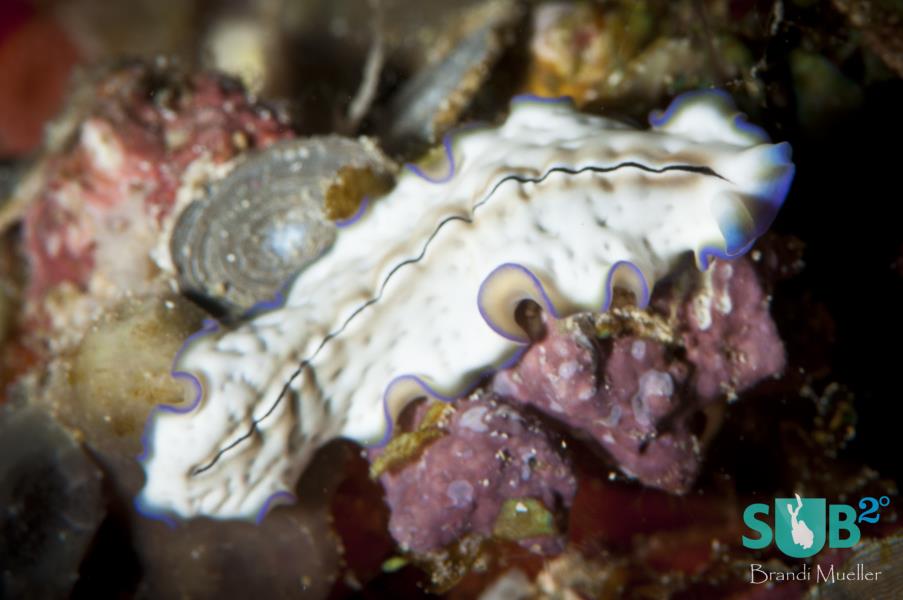 Divers often confuse flatworms and nudibranchs. One of the easiest differences is that flatworms lack rhinophores and external gills- the horn-like extensions on the head and the feathery tail-like appendage at the rear of the nudibranch. Flatworms tend to be much flatter and thinner, and can move faster than nudibranchs.

Some flatworms and nudibranchs look very similar in their color patterns; this is an example of mimicry. Mimicry occurs when one species “mimics” another to gain some sort of advantage. Many flatworm and nudibranch species are toxic, which helps them fend off predators that may eat them. In the case of a toxic nudibranch species, a flatworm that is not toxic may have evolved to look very similar in order to avoid being eaten. 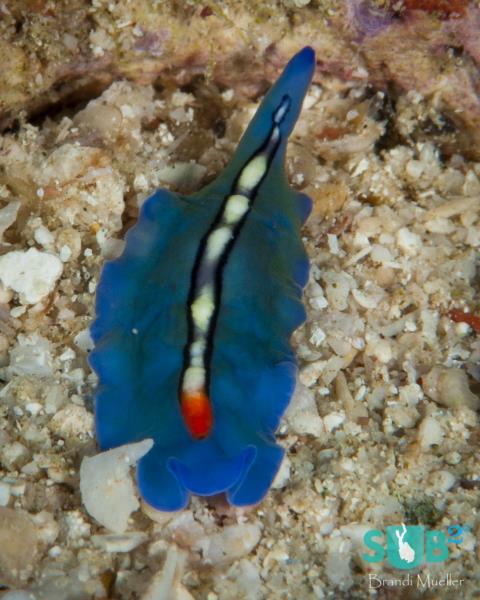 The reproductive nature of flatworms is fascinating, especially because there are several different ways flatworms produce offspring. The first way is through cloning or budding. A flatworm can naturally divide itself into two and create identical clones either by transverse or longitudinal division.

Flatworms are also very successful at regeneration. If a flatworm is severed in any manner (even if only a tiny bit is cut off) both pieces have the ability to regenerate into full flatworms. If one is cut into four pieces, four flatworms will be regenerated. These flatworms are all identical clones, having been made from the same genetic material.

The winner is the first to impregnate the other- it gets to be the male this time- and the loser becomes the female that will absorb the male’s sperm and fertilize its eggs. In most species once the eggs are fully developed they hatch as fully developed flatworms (other species release larvae that will continue to develop while drifting along in the currents).

On your next dive, keep an eye out for one of these tiny, colorful creatures, and see if you can determine whether it’s a flatworm or nudibranch. Either way, you would've found some of the ocean’s coolest macro critters.