Home The Secret World of Crinoids
0
4

The Secret World of Crinoids

The underwater world can be a scary place for small and vulnerable species; predators lurk around every corner, both literally and figuratively! Many marine species have adapted to the constant threat of predation by evolving in incredible ways to become less “desirable” by predators.

One way of achieving this is to adapt bright colors and mild toxins that deter predators; nudibranchs are a great example of this. A second adaptation is the creation of a commensal relationship between two different species that “live” together in a beneficial way, often involving a place of refuge for the smaller member.

We generally know about the anemonefish that live within the protective tentacles of a host anemone, but it’s another host that offers the ultimate in underwater home protection: the common crinoid. 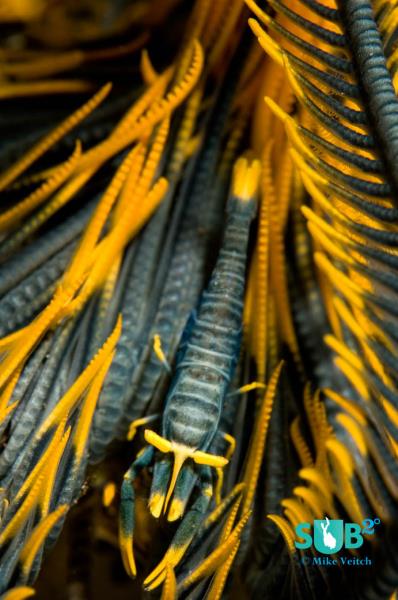 Along with sea stars and urchins, crinoids are a member of the Echinoderm phylum and are a filter-feeding animal found in cold, as well as tropical, seas throughout the world. They are frequently found perched on rocks and corals in areas prone to current movement in order to capture plankton with their exceedingly sticky appendages.

Most divers know crinoids (often called feather stars) as colorful and photogenic reef dwellers that attach to any surface, including the legs of careless divers. However, there is more to them than meets the eye!

Crinoids play host to any number of commensal relationships with a variety of different marine life. Crinoids can have anywhere from a dozen to hundreds of branching arms that are highly flexible and play an important part in gathering food and offering protection to the fragile organs found on the central disc. It’s within these sticky and retractable arms where the majority of crinoid commensals seek shelter.

One of the more spectacular companions is the aptly named squat lobster, from the Allogalathea family, a small crab that lives among the arms of the crinoid. Working as a miniature house cleaner, these crustaceans quite often take on the colors of their host in order to camouflage themselves further from predators. 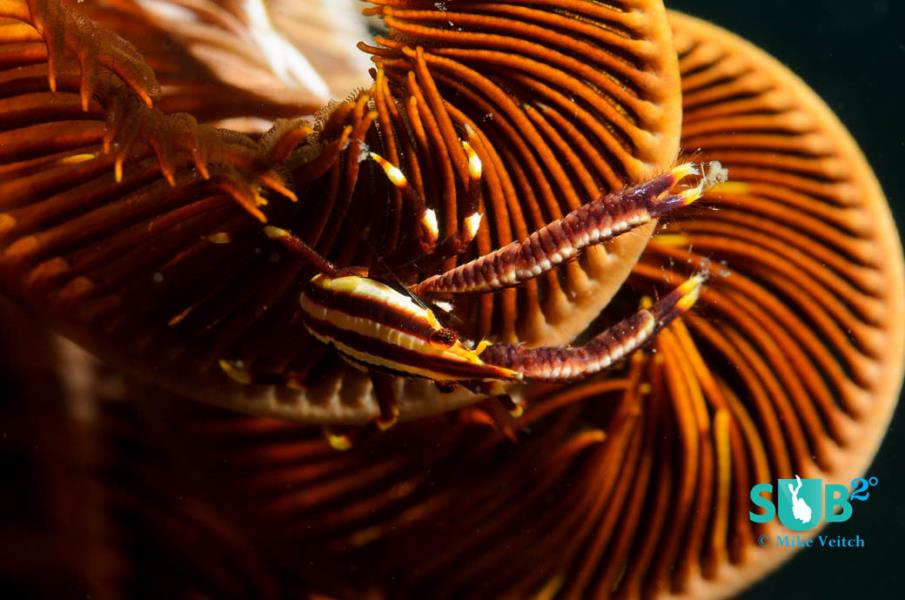 During the day, they hide amongst the arms or feet of the crinoid, before boldly walking the surface of the arms at night, picking up tiny morsels of food that have stuck to their host. A second species of crab, commonly known as “crinoid crabs”, are frequent inhabitants of crinoids but are less conspicuous than their larger relative, the squat lobster.

Not to be outdone by their crustacean cousins, shrimp have also created a commensal relationship with crinoids; several species can be found cohabiting within these spectacular echinoderms.

Although different species seem to all be called “Crinoid Shrimp”, there are many differences in size and shape between the species of Periclimenes, Laomenes, Brucecaris, as well as several others that are associated with crinoids. 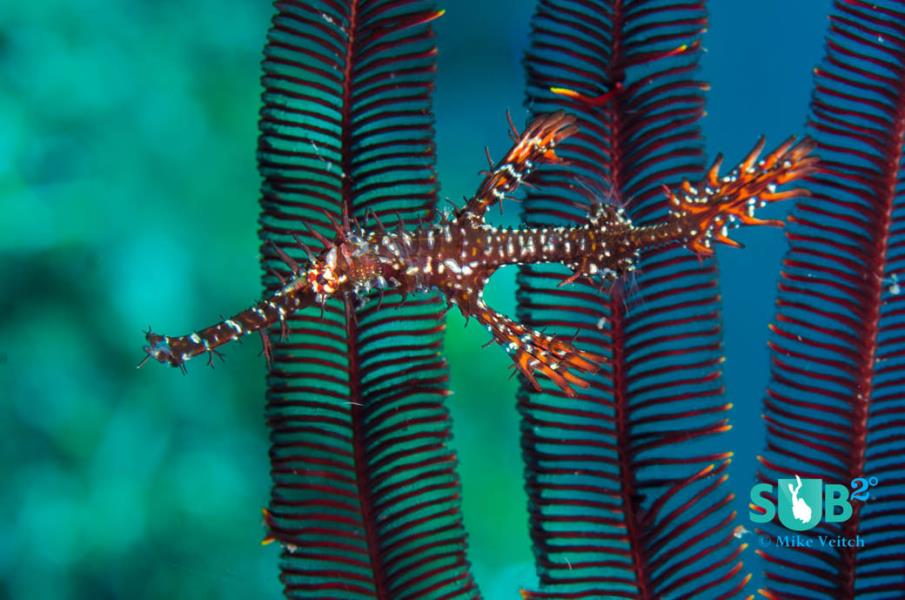 Similar to the squat lobsters, these fragile shrimp live within the protective folds of the feather star as a form of shelter, while feeding on microscopic food that sticks to the arms of the host.

Crustaceans aren’t the only ones that have created a relationship with crinoids; several species of fish also use crinoids as protection. Many juvenile species of cardinal fish, damsels, and anthias hide within the arms or under the feet of crinoids when they feel threatened by potential predators.

The beautiful ornate ghost pipefish is often found trying to blend itself into the arms of a crinoid, as a way of camouflaging itself. There is even a small species of cuttlefish, known simply as the “crinoid cuttlefish” that hides in crinoids and adapts its color to match! 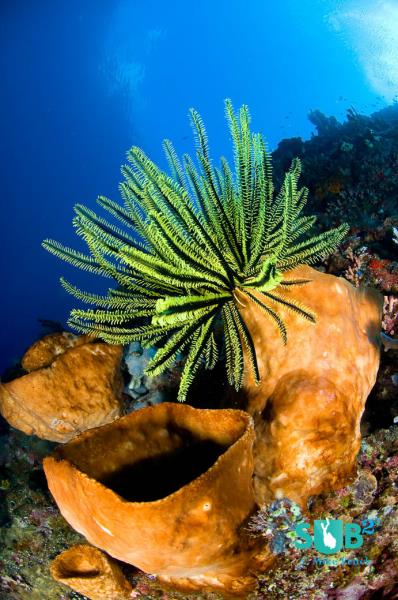 The most unique fish to call the crinoid home is the tiny, yet spectacular, crinoid clingfish. This fish, which looks like a cartoon character, with bulbous eyes, tapered tail, and garish coloration, lives nestled within the disc of crinoids and feeds upon bits of plankton and small crustaceans trapped within the crinoids’ appendages.

Trying to photograph these small fish is a lesson in frustration! They are constantly darting and dipping around their host, hiding amongst the arms.

With so much traffic happening within a crinoid, it’s always a great idea to stop and observe whenever you see one on a dive. For photographers, it’s a definite must to peer inside these colorful and exotic-looking reef inhabitants, due to the multitude of potential photographic opportunities they can provide.

All other Articles by Mike Veitch

A guide to Cleaning Stations

Jumping off the Jetty