Thanks to Discovery Channel’s popular «Deadliest Catch» TV series, the red king crab has become known across the globe. Native to the north Pacific, this armored behemoth has invaded Norwegian waters and is considered a dangerous, alien species.

The red king crab is one of the world’s largest crustaceans, sporting a “wingspan” of up to 1.8 meters (6 ft). After being released by Russian scientists in the waters off Murmansk in the 1960s, this monster has invaded the Norwegian arctic coast.

When several attempts to transport live crabs by train and truck all the way from the Kamtchatka peninsula - hence the latin name Paralithodes camtschatica - in the north Pacific failed, the crabs eventually had to be flown in.

The aim was to create a viable crab population for commercial fisheries. It is safe to say that they succeeded - the crab population has exploded since and is counted in millions in the Barents Sea. 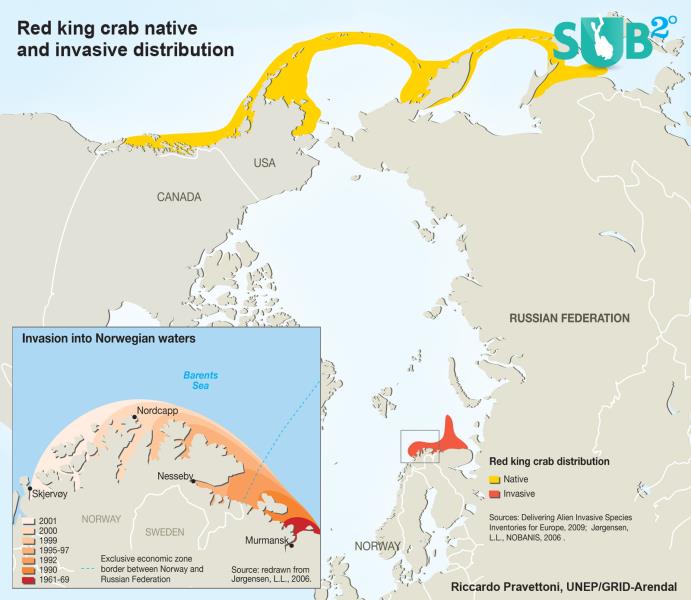 The king crab quickly took to its new environment, but had no sense of home and started to migrate to the west. In the mid 70s, the first crabs were caught in Norwegian waters, and 20 years later, their numbers had risen to a point where commercial fishing could begin.

Environmental concerns were also quickly raised – the king crab showed an unhealthy appetite. Roaming freely in large numbers, the king crab devours almost anything it comes across – sea urchins, mussels, fish eggs, bristle worms and even kelp. With a few predators, only a barren landscape is left behind. 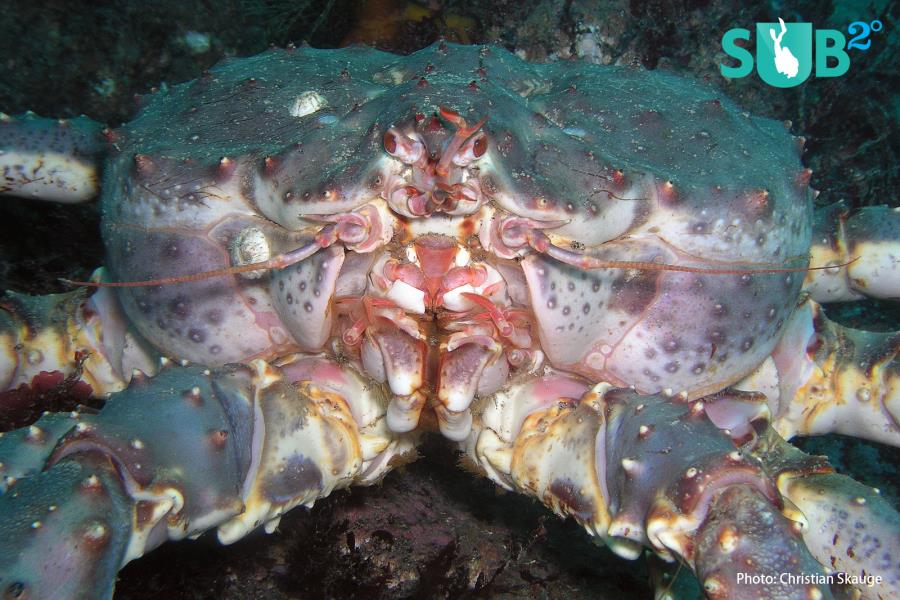 By the mid 90‘s the king crabs reached North Cape, Norway’s northernmost point, and continued further west. Research made public by the Norwegian Institute of Marine Research (IMR) this month shows that the crabs have established themselves outside Sørøya, about 160 kilometres (100 miles) south-west of the cape.

A research mission conducted earlier this year revealed smaller crabs in the area, indicating that the crabs have been reproducing.

Although a few specimens have been caught as far south as Tromsø over the last few years, there is still little crab in this area, and the IMR says this shows that the fisheries are keeping the crab population in check. 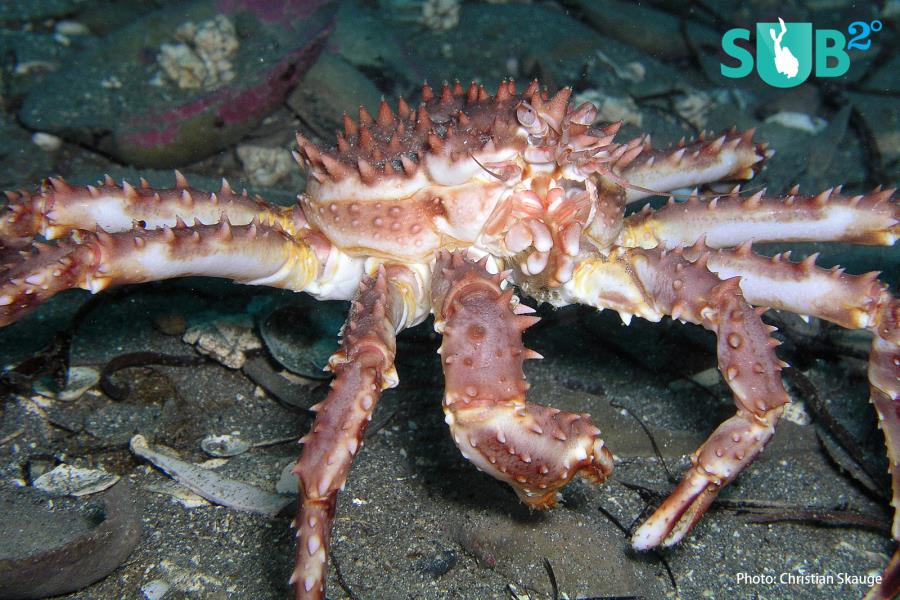 Even though temperatures range, salinity and distribution are known from the king crab’s native Pacific habitat, these are mere indications when applied to Norwegian waters. The IMR says that there seems to be no natural barriers halting the migration of the king crabs, even further south, today.

Scientists and environmentalists fear the crabs might at some point reach the vital cod breeding grounds off Lofoten, 400 kilometers (270 miles) southwest of Sørøya - and just 250 kilometers (160 miles) away from the southernmost crab observations. If the king crabs reach this area, it could have a disastrous impact on the cod fisheries, one of Norway’s most important sources of income.

Although a menace, the king crab is a very interesting creature. Diving with hundreds of these large, relatively docile crustaceans is a spectacular experience, especially during mating season in March-April.

The crabs have to come up into shallow water, and the Finnmark coast is teeming with them at this time. At other times of the year, they may be found as deep as 4-500 meters (13-1600 ft). In the typical crustacean manner, the males will grab hold of the smaller female when molting time draws close.

At other times the hard, spiky carapace prevents any kind of marital activity, and the eggs of the female can only pass through the ovaries when it is soft. The female spawns up to half a million eggs, which are immediately fertilized by the male. 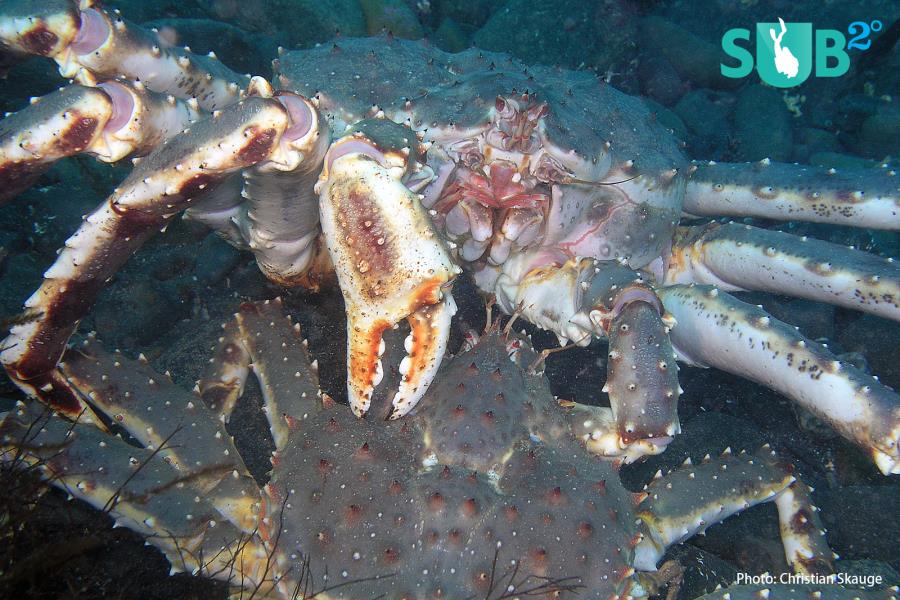 East of the North Cape, the crabs are protected and can only be fished according to strict quotas. Further west - west of the North Cape - anyone can catch crab any way they like, in accordance with the IMR’s wish to limit the crabs spreading west and south. This means that divers are also allowed to hunt for crab.

The king crab is considered a real treat, and fresh crab is flown to gourmet kitchens around the world. The price per pound may reach $130 or more - but the environmental price may prove to be significantly higher.

Other Articles by Christian Skauge

Overview of Diving in Norway

Directory of Dive Shops in Norway

Directory of Dive Sites in Norway