Home Jumping off the Jetty
1
6

Jumping off the Jetty

Piers and jetties often get a bad rap when it comes to divers, since many don't show much interest in exploring docks at all. The most common excuses tend to be entanglement hazards from fishing lines, the potential for trash in the water, or the dreadful feeling of claustrophobia from being underneath a large object. It doesn’t matter if it’s in tropical SE Asia or in a cold inland lake, many divers just aren’t interested in exploring what lies below jetties.

By passing up on diving under a pier or jetty, these divers are missing out on one of the most unique opportunities that can be found underwater. From rickety wooden pillars to giant concrete monstrosities, piers come in many shapes and sizes.

One thing they all have in common is they provide shelter, protection, and “opportunity” to creatures both large and small. The best piers for divers are ones that have been in the water for a long time, and are situated in areas that feature ample coral growth as well as a bit of current to supply a steady stream of nutrients. 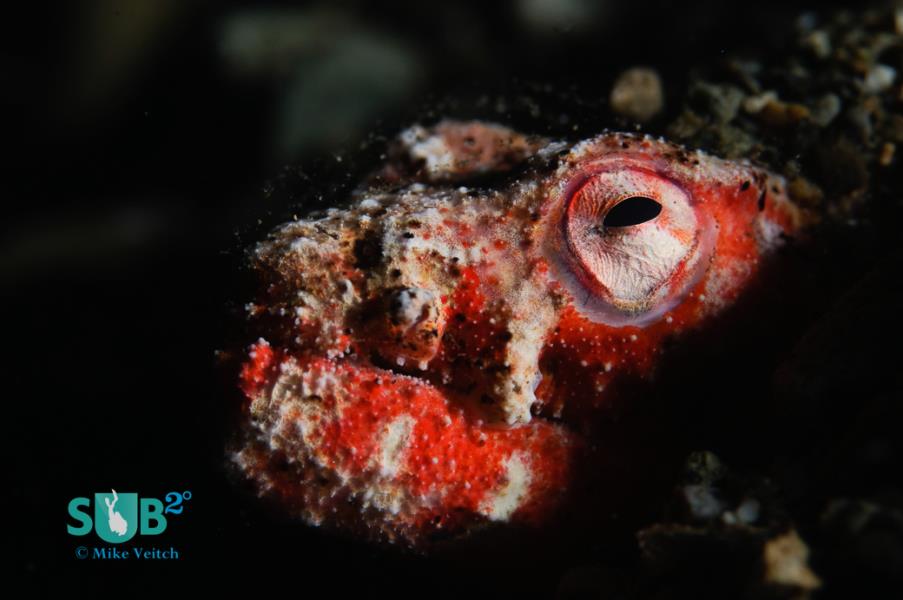 It doesn’t matter where in the world these piers are located, all jetties and docks are similar in that they play host to their own “mini ecosystem”. As many fish and other marine life are constantly seeking shelter from a world of predators, a dock in an otherwise barren stretch of sea will often host more marine life than the surrounding waters.

The pillars of jetties are almost always covered in colourful invertebrate life such as tunicates, soft corals, sponges, and sea fans. This “layer” of marine life is often the foundation of what attracts larger life to the area. The protection of sponges and soft corals attracts many juvenile fish and smaller species such as damsels, gobies, and blennies to seek shelter within.

The presence of these smaller fish in turn attracts larger denizens like trevally and morays, which cruise around the periphery looking for food. Camouflaged predators such as scorpion fish and crocodile fish also live under piers, as they have plenty of areas to hide while waiting for the opportunity to pounce upon unwary prey. Nudibranchs, crabs, shrimp, and other invertebrates are also found preying upon tunicates or seeking shelter within sponges. 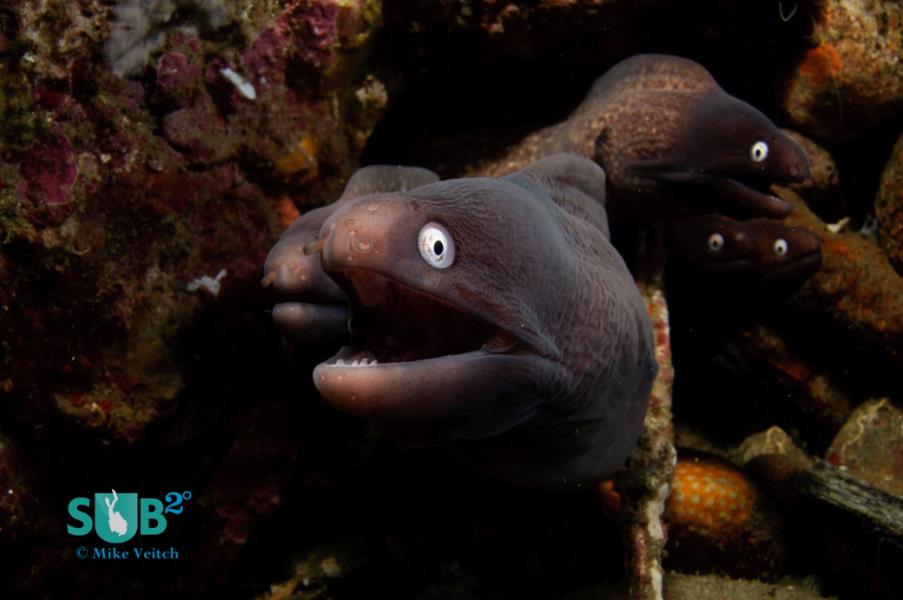 Although many divers don’t care for exploring under a dock, underwater photographers on the other hand have an innate love of piers and jetties! With such a variety of habitats, it’s no wonder that many of the top “muck diving” sites in the world are pier dives.

The presence of fishermen and boats dumping unwanted fish scraps under piers often results in weird and wonderful animals such as frogfish, eels, and octopus, taking residence in order to scavenge from these easy pickings. Wide-angle photographic opportunities are common and varied, as docks attract large schools of fish that congregate between the pillars and fill the frame of even the widest lenses.

Colourful soft corals, sea fans, and sponges are great foreground subjects that smart photographers can utilize in the composition of photos, featuring the pier itself as a secondary background subject. Human interaction can also be used very well in these situations, as enterprising photographers can often convince curious children, who may be watching the photographer, to peer down into the water for very effective split photo opportunities. 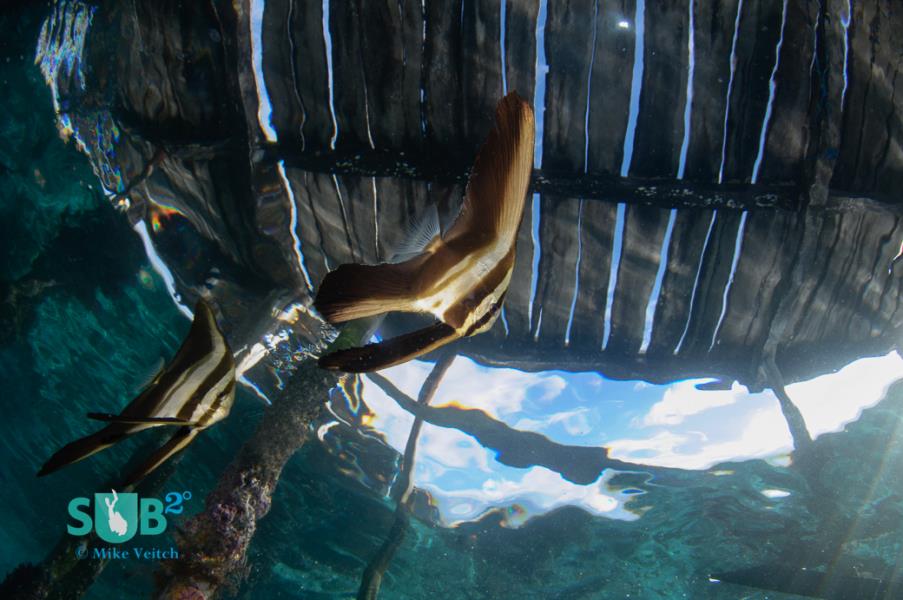 My personal favourite pier is the infamous “Twilight Zone” dive site in Ambon, Indonesia home to a large variety of fishing boats that dump any number of unknown fish carcasses in the water. However, amongst this carrion lies a treasure chest of weird and wonderful critters that makes underwater photography so much fun.

Ornate ghost pipefish, wonderpus, blue ring octopus, mantis shrimp, rhinopias, mandarin fish, and stone fish are just a few of the amazing photographic subjects that lie beneath this set of three piers. There is also a large school of mackerel that hang out in the shallows and make for stunning wide-angle photo opportunities, when sunrays filter through the dock in the late morning. 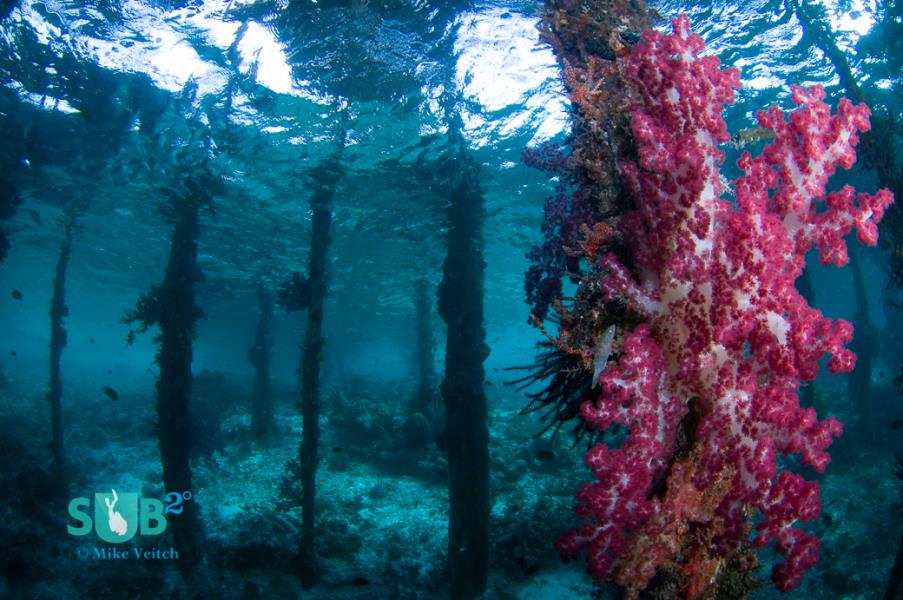 It doesn’t matter if you are a photographer or not, jetties offer a little something special to all divers. Instead of worrying about the unknown feeling of “what lies beneath?” it’s far more satisfying to shove those fears aside and jump right in! To tell the truth, when I was a kid I never wanted to swim beneath a dock; I didn’t want to meet any “monsters” that might be lurking beneath. Nowadays, whenever I see a pier I wonder what lurks beneath, and what lens I will need to photograph it.

The Underwater World of Bali