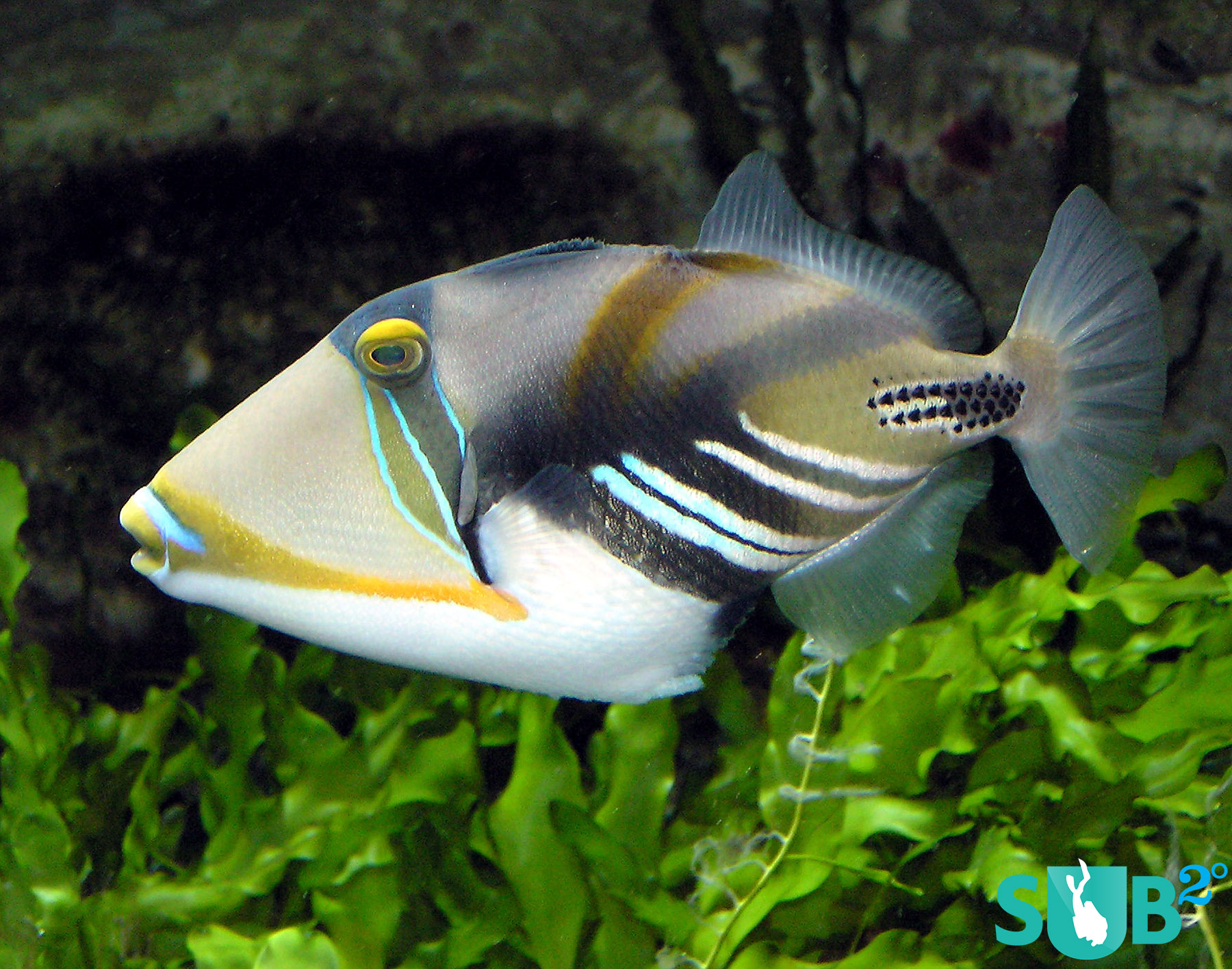 Called lagoon triggerfish, blackbar triggerfish, Jamal, and even humuhumunukunukuapua’a – Rhinecanthus aculeatus is a fish of many names. Of all its common aliases, the most poetic - and my favorite - is the Picasso triggerfish.

Just hearing that name is enough to tell you this fish is a work of art. The name refers to the fish’s striking coloration, and perhaps to the bold geometry and prominent eyes that bring to mind Picasso’s grand mural, “Guernica”. However you refer to it, the Picasso triggerfish is a fascinating animal and a joy to watch as it glides above sandy reef flats.

Triggerfish are so called for the shape of their dorsal fin, which they can raise and retract into a groove in their back. This distinctive fin and the thick, elongated snout make the triggerfish relatively easy to identify. They also do most of their swimming by slowly rolling their broad fins on top and bottom, rather than by flexing their whole body like many other fish.

On top of that, splashed in simultaneously precise and abstract brushstrokes, the Picasso Triggerfish is colored in lines of bright white, lush black, electric blue, and sunflower yellow.

The Picasso trigger’s behavior is just as complex and interesting as its coloration. Aggressive, territorial polygamist and caring, protective parent, Picasso triggerfish deny categorization. Males vigorously guard their territories and spawn with all females residing in that territory. After spawning, both sexes protect the vulnerable eggs from predators.

With powerful jaws and sharp teeth, Picasso triggerfish are formidable guardians, and have been known to nip at divers who intrude on their territory.

Crustaceans, urchins, and other hard-shelled animals make up most of their diet, so their mouths are designed for crushing. These powerful chomps can easily break skin and sour a dive, so it’s best to swim away if you find yourself confronted by an irate triggerfish. The Picasso trigger is fairly small, but a larger species like the Titan triggerfish can really pack a punch.

However, like most other animals, the Picasso triggerfish will do you no harm as long as you give it its space. So, if you spot one on a dive, take a page out of its book and wave your fins just enough to stay put. Hang around for a few minutes and enjoy the presence of one of the masterpieces of the underwater world.