Crocodiles are extreme predators. They have the strongest bite of any animal, and they attack by ambushing their prey. They wait, usually with almost their whole body submerged underwater, for an unsuspecting animal to come closer and then they strike. They have 80 teeth that can be replaced over 50 times in their lives (estimated to be over 70 years), and are also deadly rapid both on land and underwater.

I was diving Aktun Ha, a cenote in the Yucatan Peninsula of Mexico, frequently called the Car Wash cenote. Adorable freshwater turtles, about the size of softballs, were all over, and I was laughing constantly at how they would try to hide in the growth, holding perfectly still in hope that I wouldn’t see them. Little did they know they were making perfect photo subjects in their stillness, and I spent most of the dive photographing them. 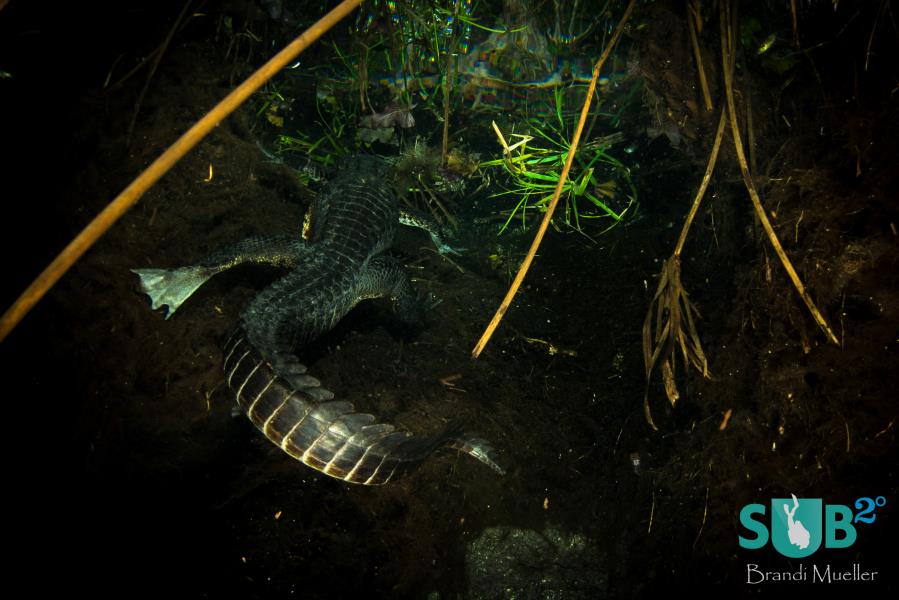 Towards the end of the dive, I was near the surface when I saw a strange-looking, large green piece of forest debris. On my second glance I saw that it was the muscular and scale-covered tail of the infamous crocodile I had been told lived in the cenote.

My dive buddies had mentioned in the past they had seen a small, juvenile croc that was friendly to divers, but nonetheless my breathing and heart rate increased dramatically. I kept looking at the tail and then looking around for someone to confirm what I was seeing, and after a few minutes, I remembered I had a camera and I should be taking pictures. After snapping a few photos, I swam over to my dive buddies to get their attention and bring them over.

When we got back to the croc, I positioned myself strategically behind one of the other photographers, while still trying to shoot a few photos. Give me sharks any day, but crocs make me nervous! This small croc stayed perfectly still, 90% of his body underwater and just the top of his head on the surface, as we shot several photos. 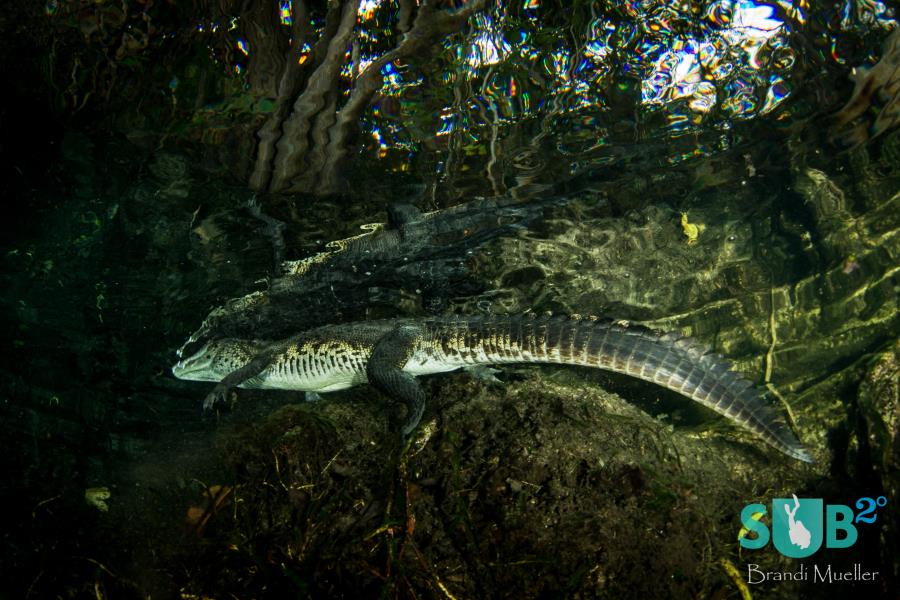 Having seen crocodiles at the surface before with only their eyes and snout sticking out above the water, it was interesting to see a crocodile from below. Its body and webbed feet didn’t move an inch, and in murkier water, it would have appeared to be nothing more than a piece of tree or some other discarded plant life.

Underwater crocodiles pull their feet into the sides to make them sleek and fast while swimming, and they use their webbed feet to quickly change direction and make sudden movements. After getting a few shots, the croc grew bored of us and swam down into the darkness of the cavern.

Aktun Ha, which means ‘cave water’ in Mayan, is more commonly known as the Car Wash cenote because years ago taxi drivers would wash their cabs there. With no taxicabs around, the site now has a small parking lot, and each day cars and trucks are seen with dive gear hanging out of their trunks. 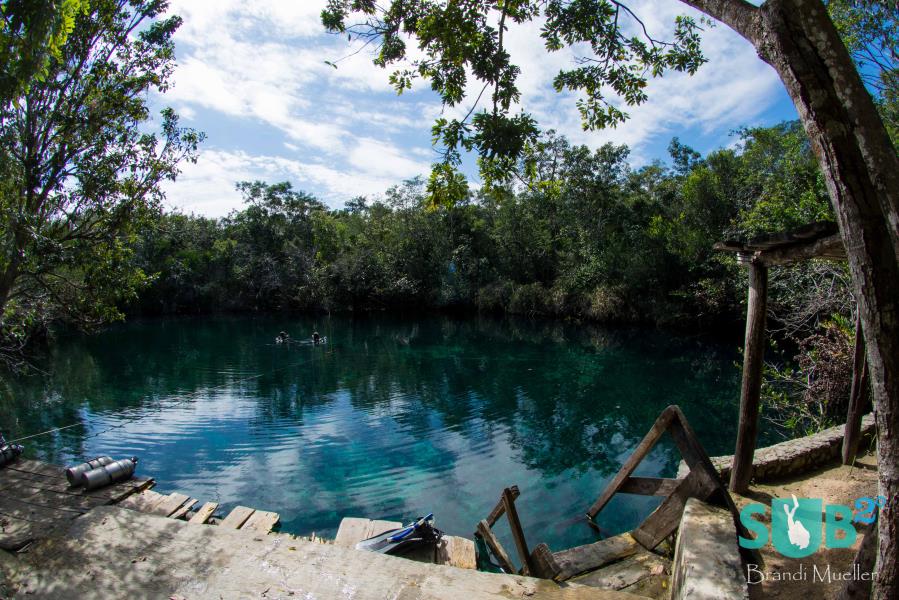 A few steps from the parking lot, the crystal clear water is nestled in a green mangrove forest. Being one of the smaller cenotes in the area, it looks like a small pond. Much of the dive site is between 10 and 30 ft, with parts of the cave reaching 50 ft. During some parts of the year, algae growth tints the top layer of water, but below the layer of algae the water is clear.

Non-cave divers can be found exploring under a few rock overhangs before the cave entrance starts, and students training for cave diving is a common sight. No one should enter the cave without proper training and without information on the cave, and often there isn't a permanent line set in the cave. 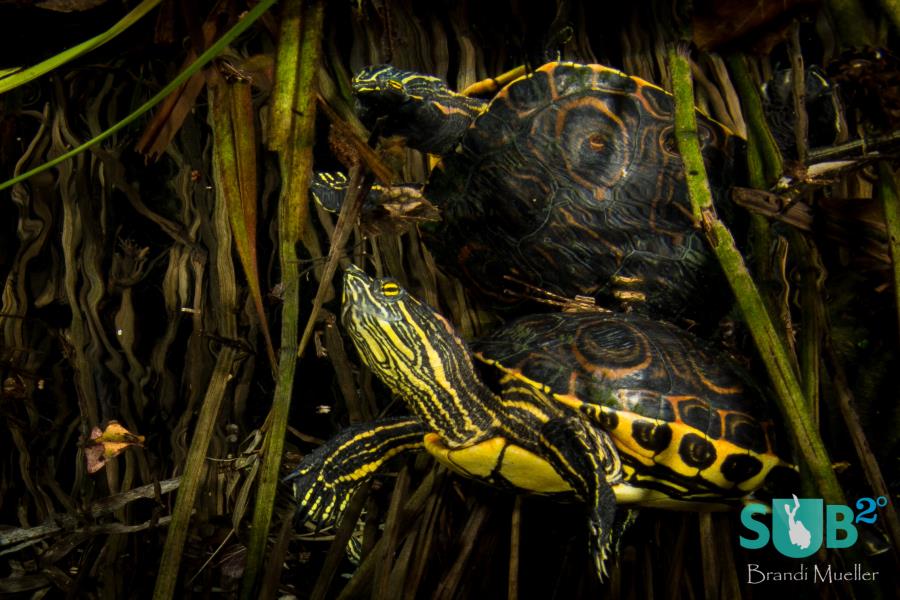 Although crocodiles have been shown to tolerate divers in a non-aggressive manner, due to their nature it is best to dive with crocs under the supervision and guidance of a reputable dive operation that has experience diving with crocodiles.

Overview of Scuba Diving in Gulf of Mexico