Literally diving in an aquarium, Lake Malawi contains aquarists’ favorite freshwater tank fish. Many love the beautifully colored cichlids, but few dive this beautiful lake in South Eastern Africa. Apart from its aquarium fish, Lake Malawi is also a biologically important lake containing the most number of species in any one lake.

The ninth largest lake in the world and the third largest in Africa, Lake Malawi stretches 365 miles across and is 52 miles wide. It sits between the countries of Malawi, Mozambique, and Tanzania. David Livingstone came across the lake in 1856 during his Africa exploration. When he asked the local people what its name was, they told him “Nyasa”, which he later found out meant “lake” in the local language.

Diving Lake Malawi has been on my bucket list for quite some time, probably due to hearing about the impressive rates of evolution during biology classes or seeing some of the beautifully colored cichlid fish in aquariums. So after about 30 hours of flying and a six-hour car ride, I ended up on the shores of northern Lake Malawi at Kande Beach.

A beautiful white sandy beach and light blue waters that blended in with the sky greeted me. Just offshore, about a half mile, was a rock island also called Kande, a popular dive site for the area. Cichlids live around rocks - and are sometimes called rockfish- so where there are rocks, there tend to be cichlids.

Having recovered from my journey, the next day was time to dive. We headed out to the island for my first lake dive in Africa and my first high altitude lake dive (Lake Malawi is at 1640ft above sea level).

While gearing up, the dive master told me I probably wouldn’t need any weight because the lake is all fresh water and we were using steel tanks. Unconvinced, and just to be safe, I brought two pounds anyway. Turned out I was overweight even with no weights! I had never been on a dive with no weights before. 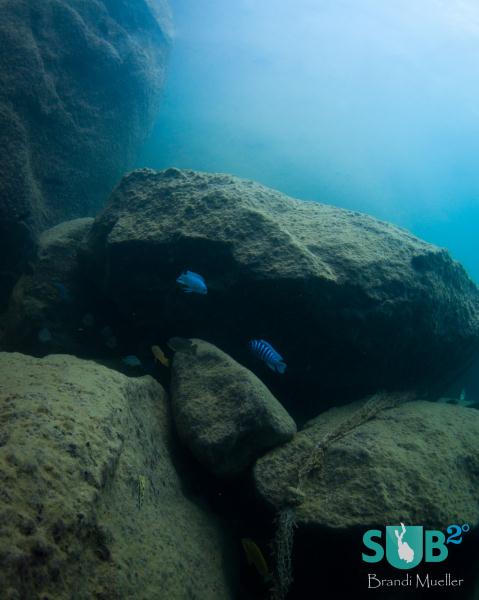 Kande Island is a popular dive site with a max depth of 40ft, and it allows divers to swim all the way around the island in one dive. Large boulders of different sizes appear to have been stacked on one another, creating several narrow swim throughs that feel like you’re traversing through narrow canyons. And all along these boulders are the fish Lake Malawi is famous for – the cichlids.

Lake diving, compared to ocean diving, can be a bit drab. No colorful corals or sponges, just a lot of rocks and sand. But for what the lake doesn’t offer in sessile marine life, it offers in beautifully colored fish. Opalescent and midnight blues, lavenders, yellows, and more, the fish speckle the lake with color. Most of the cichlids are small fish, only 2-4 inches, but some of them get up to 3-4 feet!

As divers, we often use the expression that we’re diving in a big aquarium, but never had that felt more true to me. Diving Lake Malawi was like diving the aquarium of my childhood – freshwater. With a sandy and pebbly bottom, a fake sunken boat, and a treasure chest that’s lid-open with bubbles.

Okay, there was no treasure chest. But there were several sunken boats, a traditional Malawian fisherman dugout canoe, a small wooden boat, and a sunken jeep. You know you’re in Africa when you’re diving with safari vehicles!

On another dive, we headed to John’s Reef, a deeper dive around 90ft, just another half mile away from the island. As we descended towards the bottom, I saw fish of the same shape as the previous dive in the rocks below, but they were completely different colors!

The fish species seen in the shallows weren’t seen in the deeper waters, and I hadn’t seen most of these fish before. With so many species in the lake, each one has taken very specific habitats. Just the Kande area has several endemic fish found nowhere else in the lake.

Sadly both the beautiful lake and its unique fish are threatened. Over-fishing is a major issue as most of the country of Malawi depends on the fish as their most important source of protein. As the population grows, the prospects of deforestation, increased farming and run-off threaten to pollute the lake.

The aquarium trade also contributes to loss of fish, although luckily many cichlids destine for aquariums are breed in captivity. Other issues include the introduction of new species as well as oil exploration on the lake.

Diving in Lake Malawi and seeing all the colorful fish was a very unique experience. The calm and warm waters make for easy dives with lots to see. If you happen to find yourself in Malawi, I highly recommend a few dives to check out these distinctive fish.