The deep blue color of the ocean has always captivated man, and divers marvel at the different shades of it every time they venture below the surface. But what is blue, exactly?

According to Wikipedia, Blue is the color of light between violet and green on the visible spectrum. Hues of blue include indigo and ultramarine, closer to violet; pure blue, without any mixture of other colors; Cyan, which is midway on the spectrum between blue and green, and the other blue-greens: turquoise, teal, and aquamarine. 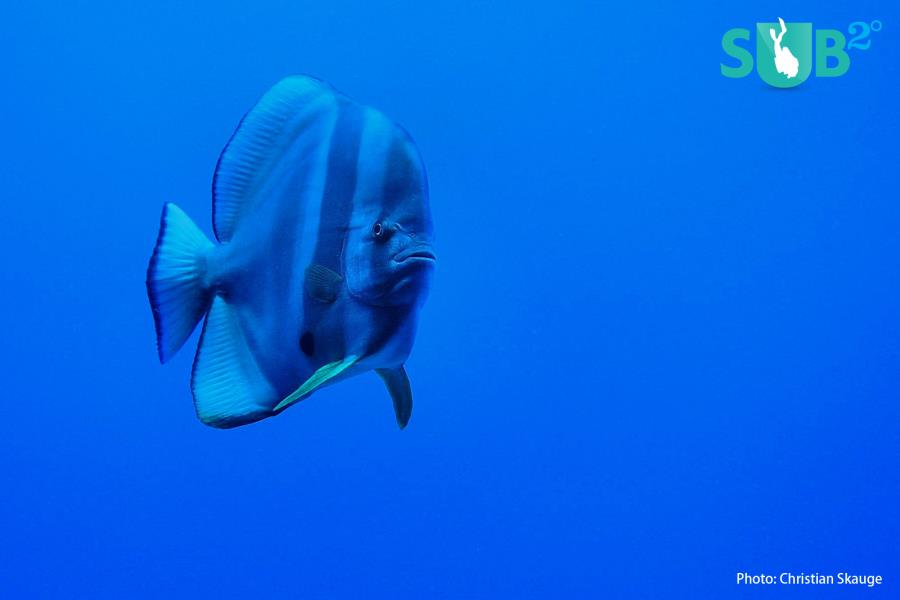 What shade of blue you see under water depends on many things: Sunlight, the amount of algae or plankton in the water, and even pollutants and freshwater influx can influence the hue. Most important is, of course, the depth – the further from the surface, the deeper blue the color. Above water it’s easier – the ocean appears blue mainly because it reflects the sky.

While small amounts of water appear to be almost colorless, the tint becomes a deeper blue if you have more of it. The ocean is, to put it mildly, more of it. In the shallows you can see natural colors throughout the spectrum, but deeper down greens and blues dominate. Unless you use a torch, you’re as blind to color as the creatures inhabiting the ocean floor.

The reason for this is the water’s ability to absorb colors. To be more specific, different wavelengths of light are filtered out at different rates. Water is made up of H2O, but this only explains the absorption in the ultraviolet spectrum.

The key lies in how the water molecules vibrate, like all things made up of atoms do: The vibration of water molecules causes absorption in the infrared part of the spectrum, namely at 698 nm. 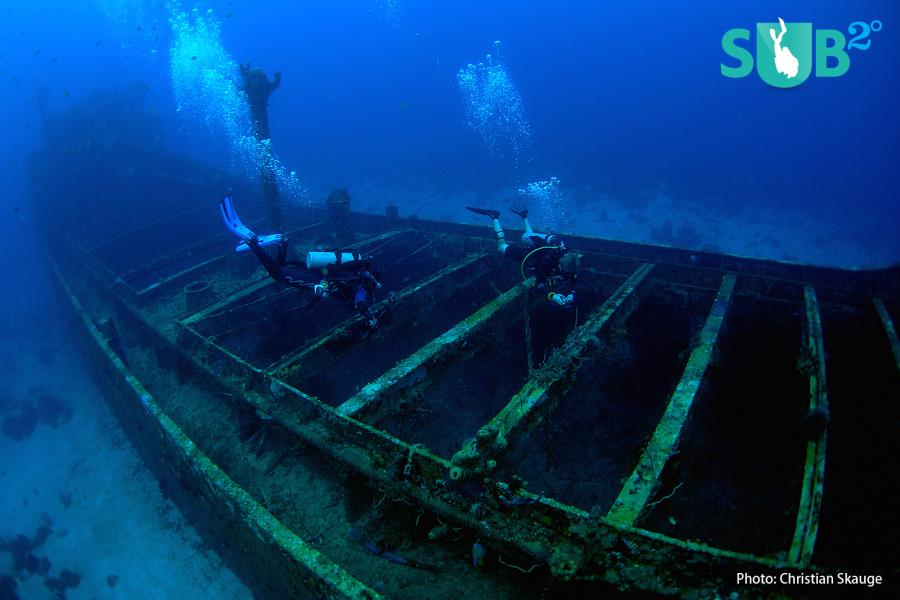 As you may have already guessed, red is the color closest to infrared. It lies at the border of the visible spectrum, at 700 nm. Alas, red light will disappear before other colors when travelling through water. After red, orange and yellow will follow – leaving only green, blue and violet. These colors have a wavelength of 650 to 400 nm and will travel further through water simply because there is less absorption in this part of the spectrum.

The amount of water between you and the surface decides the rate of which the different wavelengths are absorbed. In shallow water all of the colors are present, but only light in the lower part of the spectrum will follow you into the deep, blue ocean. Now you know why it’s called just that.

A torch will help you illuminate the things you see under water, and bring out their true color. However, the principle of absorption is just as valid horizontally as it is vertically - the red and yellow light will only travel a few feet through water, regardless of direction.

Using strobes for photographing subjects further away simply won’t make much difference at depth; the red, orange and yellow is absorbed and everything just stays the same blue as it does without an artificial light source.

In a way, you could say that blue is more a lack of other colors than anything else. 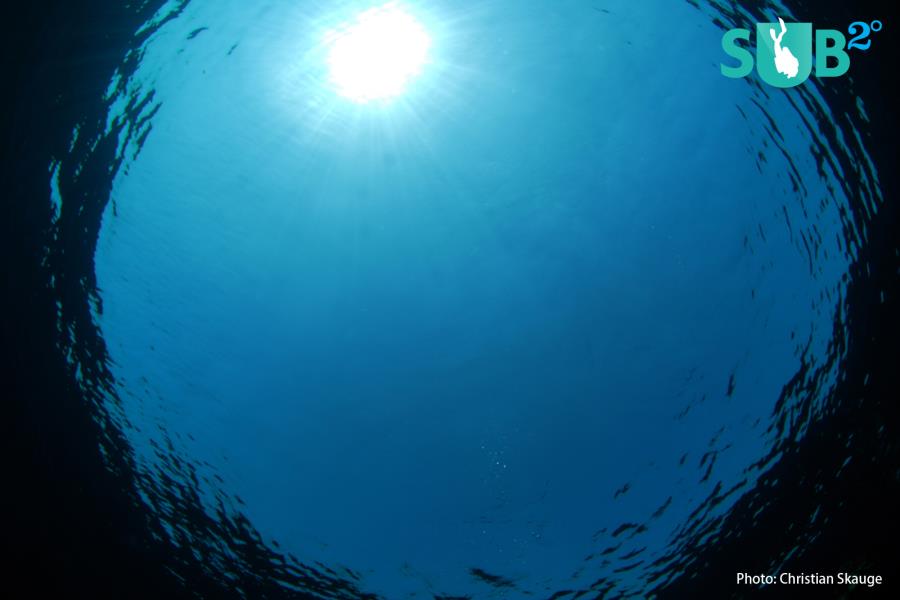 Animals living in the deep sea don’t have much use for color, and are often «colorless» - they have the same color as the surrounding water. Blues and grays work well as camouflage, especially seen from above or sideways.

But what if you’re spending most of the time mid-water? Any predators below will see you regardless of your color, because your silhouette shows up just fine against the light from the surface. Sharks (and other animals) have countered this by being dark on the upper half and light on the lower half of their bodies – they literally blend in with the surrounding light.

Other fish, living deeper, have come up with an even more ingenious solution: They produce their own light! A dark backside and a belly full of light-emitting organs will make you literally invisible both from above and below. 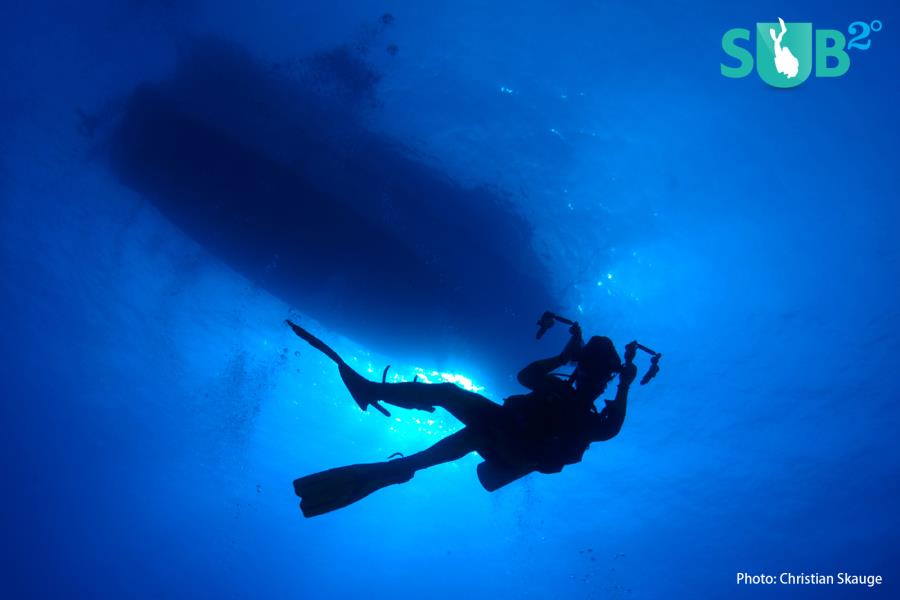 If you have ever cut yourself on a sharp piece of coral under water, you might have been surprised to see the color of your own blood. Instead of being, well blood red, it takes on a dark green or even black color. This is just another example to show that red light doesn’t travel very far beneath the surface.

The next time you go diving, look at how the color of the water changes as you venture deeper. Soon you’ll be enveloped by the blue, blue ocean and can marvel at the shades in peace.

Are we eating sustainable seafood?