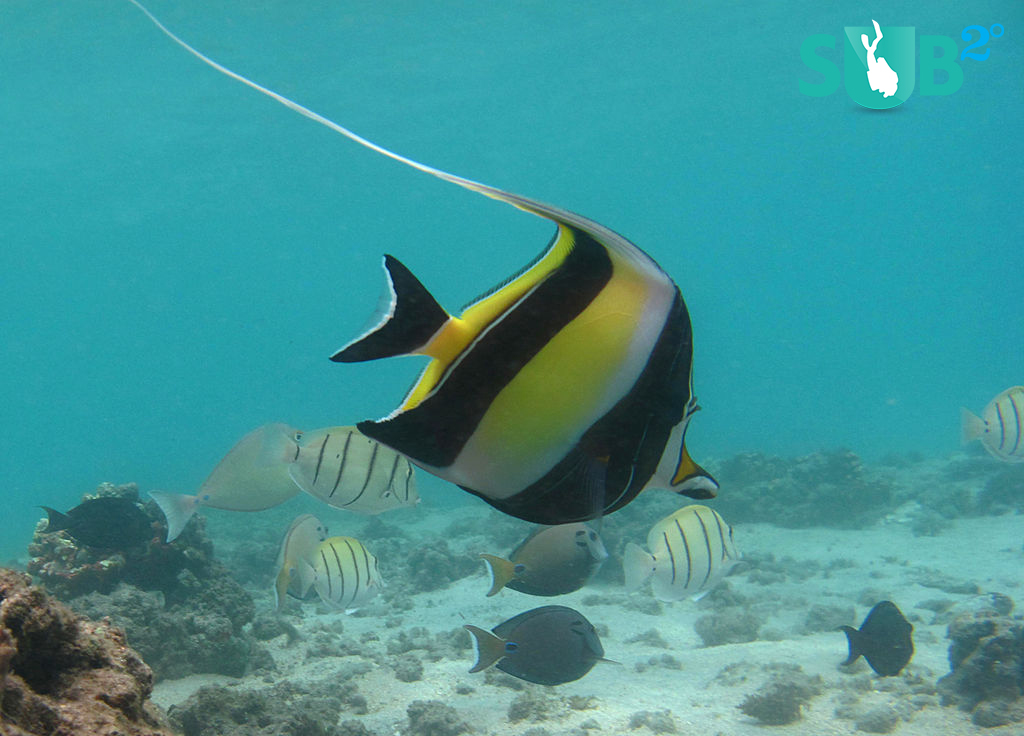 Some animals are so iconic that they become almost synonymous with coral reefs. Pictured in every pet store mural, dive shop pamphlet and underwater photographer’s portfolio, the Moorish idol (Zanclus cornutus) lives not only on coral reefs throughout the Indo-Pacific, but also in the reef of our collective conscience. Despite, or perhaps because of this fish’s ubiquity in popular imagery, its presence is easily taken for granted. When you take a closer look, however, the Moorish idol is an interesting fish worth examining.

Alternating stripes of lush black and bright white cover its body, with a dash of sunlight yellow brightening its back. On top of this elegant coloring, the Moorish idol sports a vibrant orange mask across its snout and a flamboyant filament trailing from the tip of its dorsal fin. Because of its narrow mouth and long, stringy fin, the Moorish idol can easily be mistaken as a butterflyfish or bannerfish. However, it is the only species of the genus Zanclus and is more closely related to the surgeonfish family.

The Moorish idol’s resemblance to the butterflyfish is more than a coincidence. The shared feeding habits between these types of fish have led to their similar appearance. Both spend their days foraging for sponges and crustose algae within holes and crevices in the reef. Their thin bodies and elongated snouts allow them to obtain food in hard-to-reach places.

Interestingly, despite its broad geographical distribution, the Moorish idol shows little variation between populations. Many fish species have regional variants that are drastically different colors. However, Moorish idol larvae spend a long time drifting through the open ocean before they mature, so regional populations don’t remain isolated enough to develop particular traits.

Because of its beauty and its identity as a quintessential reef fish, the Moorish idol is a very popular fish in the aquarium trade. This popularity is unfortunate, because Moorish idols usually don’t take well to captivity and their lifespans in tanks are drastically reduced. This beautiful fish should be enjoyed where it belongs, on tropical coral reefs. And although not everyone will necessarily be able to see it in its natural habitat, we can rest assured that the Moorish idol will always be a photogenic subject, there to ignite our imaginations around the world of coral reefs.