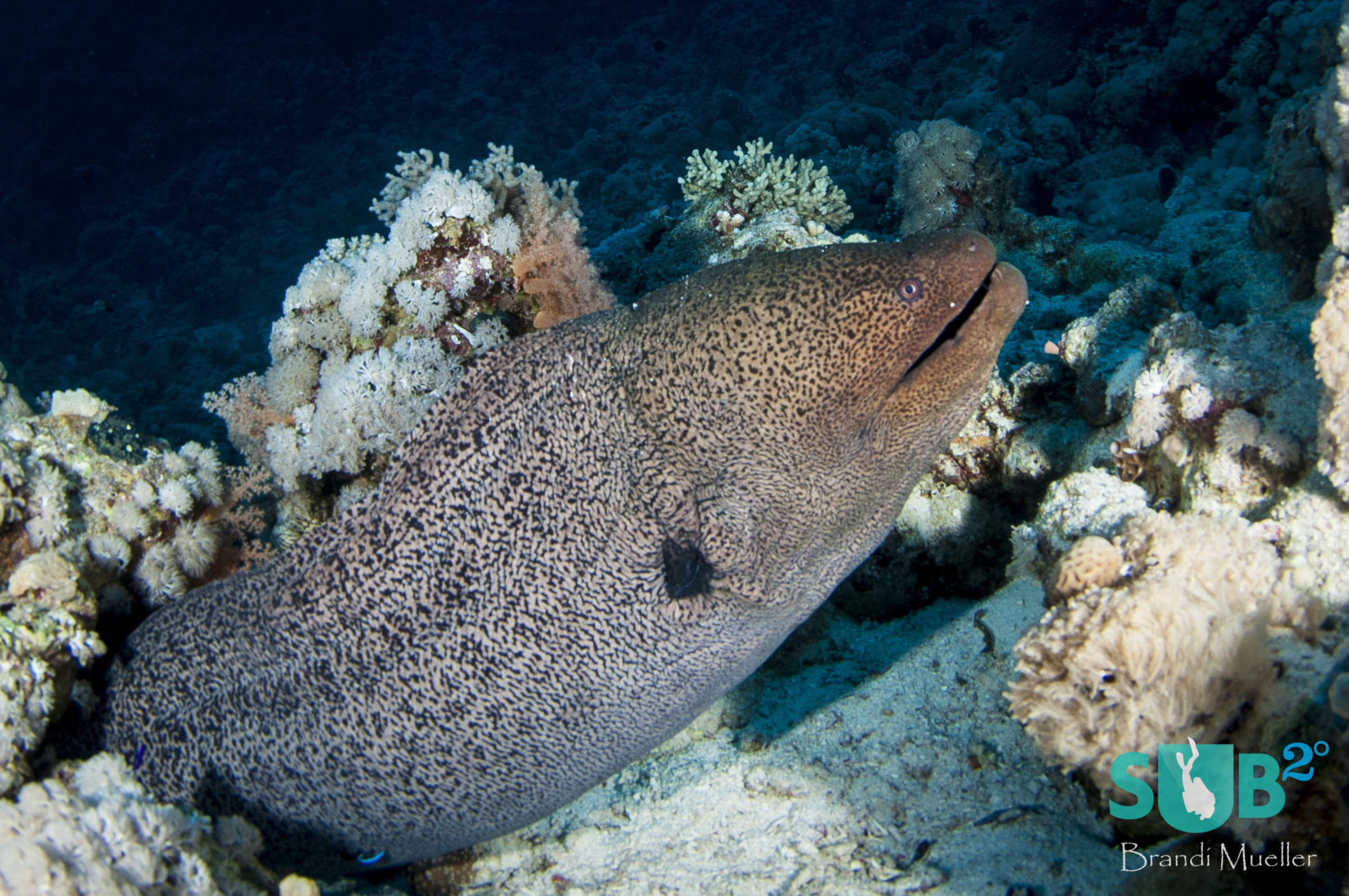 Poking its head out of a crevice, slowly opening and closing its mouth, the giant moray eel (Gymnothorax javanicus) is the surly old man of the reef. However, behind this grisly visage, there exists a fascinating fish. As threatening as that gaping mouth may seem, the giant moray is actually just breathing. It opens and closes its mouth continually to pump water past its gills. With virtually no fins other than the broad dorsal fin that spans the length of its body, moray eels don’t fit the archetypal image of a fish, but they are nevertheless ray-finned fish.

The giant moray is appropriately named, growing up to ten feet long and weighing in at upwards of sixty pounds. Despite their intimidating appearance, they are generally gentle giants and are more likely to hide in a crevice or run away than bother you. The only danger they pose to humans is in defending themselves or accidentally chomping off the finger of someone trying to feed them. The latter can be entirely avoided by simply not feeding a wild eel.

As formidable predators, giant moray eels do not require any handouts from humans. The crevices, where they spend most of the day, do not only serve as shelters. When a tasty looking fish swims past the opening, the giant moray will fire itself out and clamp down on its prey with its powerful jaws. Then, terrifyingly, like something straight out of science fiction, the giant moray uses a second set of jaws in its pharynx to pull its prey into its body. Morays are not solely ambush predators. At night they leave their shelters to forage across the reef. Check the links to the right for a video of a giant moray trying to eat a small reef shark.

The giant moray is not simply a hardened hunter; when it comes time to mate, giant morays can also be tender lovers, gracefully entwining their long bodies before releasing their gametes to fertilize in the water. Interestingly, giant morays are sequential hermaphrodites, born as males but turn into females later on in life.

As top predators, giant morays accumulate large quantities of ciguatoxin, making them potentially deadly to humans who eat them, so they are seldom fished. Giant morays are fairly common in the Indo-Pacific, inhabiting lagoons and seaward reefs from the Red Sea to Hawaii. So next time you see one of these amazing fish on a dive, don’t judge it by its scary face. Just keep your fingers away from its mouth!