The sharpness of a photograph depends on the camera in use, the lens, and on camera settings. Every lens has an optimal range regarding its sharpness performance.

As a basic rule of thumb, most lenses provide their optimal sharpness with an aperture setting that is two full stops higher than the possible widest aperture of the lens. If you use a lens that comes with an aperture range of f/4 to f/22, it will most likely perform its optimum sharpness at f/8 (= 2 full stops over f/4). Cheaper lenses that start with f/5.6, as most open aperture would, perform well at around f/11.

As RAW (or DNG) should be the format of our choice, we can say that every digital photograph needs to be sharpened during postproduction- some more, some less.

Referring to postproduction of RAW images, the workflow of sharpening comes with 2 steps: Capture and Output sharpening.

Capture sharpening is fixing the softness characteristic in digital images, and is done in Adobe Camera Raw (ACR) or in Lightroom.

Output sharpening is done at the very end when finalizing an image for digital presentation or print. Adobe Photoshop is a good tool for proper output sharpening.

Note: Whatever tricks or techniques are available in sharpening during postproduction, they will never turn a blurry image into a crisp-sharp one. See an example here:

Whatever I try, this surgeon-fish will never become sharp, as my shutter speed of 1/60s was too slow for its fast movements in this ambient light shot.

Unless you intend to work with blurriness as creative element, it’s better not to waste your time with postproduction attempts to make blurry images crisp-sharp ones.

Now, let's look for an image that comes with an already acceptable level of sharpness but would benefit -they all would- from a little extra capture and output sharpening. 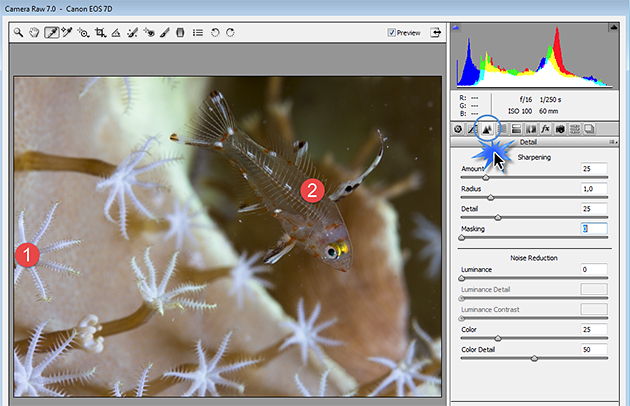 This image is opened in ACR. Access the capture-sharpening tool by the 3rd icon in the editor (see blue-marked area).

Before sliding the sliders, here is a quick checklist of what to notice:

Every time we look at an image to check its details and see what could be done in postproduction, we need to zoom in into 100% (by using the magnifying tool) and then move around the image with our mouse (using the "hand" tool) to determine fine but important details: 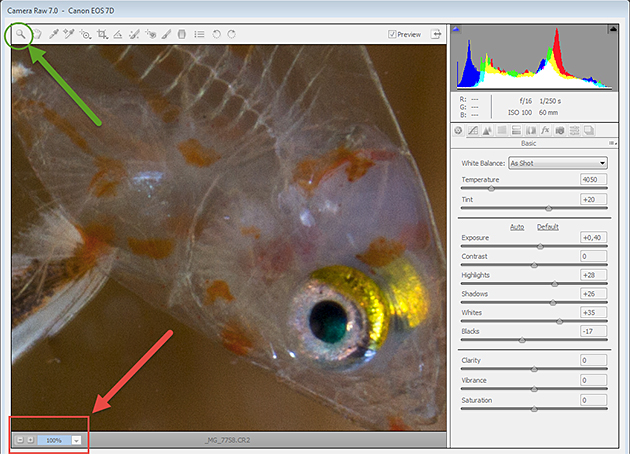 The RAW sharpening tool in ACR offers us 4 different sliders for sharpening options; let's see what they can do:

Amount- Controls the strength of the sharpening effect. ACR pre-applies an amount of 25% to all RAW & DNG images (but not to JPGs or TIFFs). 25-45% is just fine.

Radius- Determines the number of pixels around the edge in which the sharpening effect is applied. ACR's preset here is 1.0 and a range of 0.7 to 1.3 usually works well.

Detail- The higher the value, the more the enhancement of finer details and texture are applied. How much detail depends on the photograph.

Masking- Restricts sharpening in less detailed areas of the image. Hold down "Alt" on your keyboard while dragging the slider to see the masked areas in black. We rarely need to sharpen the water or backgrounds, so an amount of 25-35 does a fine job here.

In this image example, I've applied the following pre-sharpening settings: 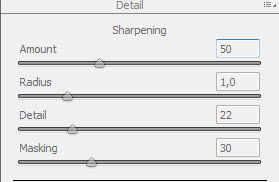 Now it's time for the output sharpening, the final step! I opened the image in Photoshop, quickly erased a few backscatter, and applied a curves adjustment layer for final color adjustments.

A zoomed-in view shows me that the details of the fish now look better, while the background still appears smooth, thanks to the masking option in ACR. 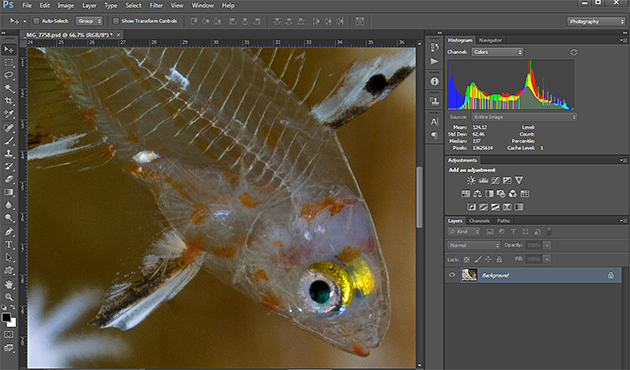 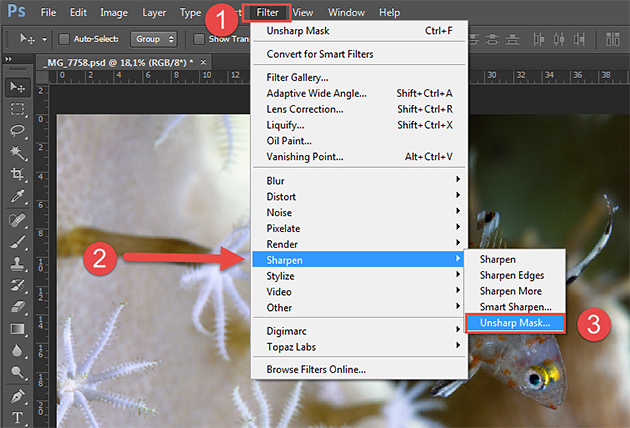 2) Set the sliders for "Amount" to somewhat between 50-90, the "Radius" to 0.7 to 1.5, and the "Threshold" to 3. You have a small preview screen that shows you areas of the image in 100% magnification (you can select them with your mouse). Move around your entire image and check that there are no unwanted halos in bright areas or nasty outlines. If you spot those problems, decrease values of "Amount" and "Radius" until the problems disappear. You'll see all modifications in real-time. 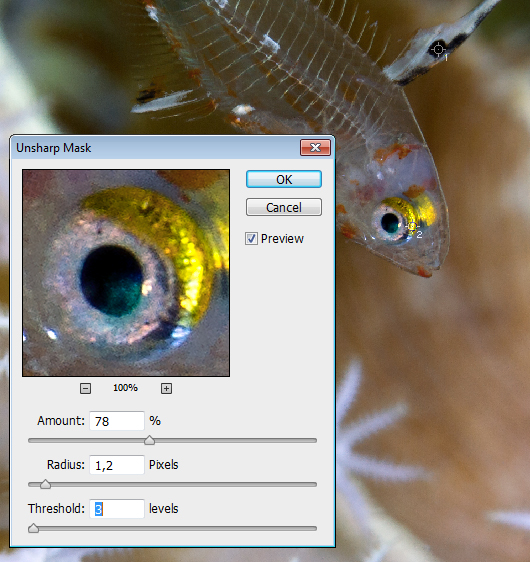 Note: You can uncheck/check "Preview" to see the changes before and after.

3) Confirm with "OK", save the image, and enjoy your awesomely sharp photograph - congratulations! 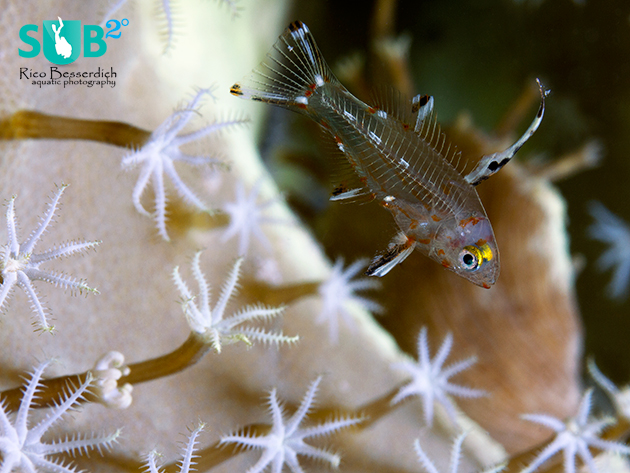 Go back to Part 8 - Cropping