The cuttlefish belongs to the family of cephalopods. Typically the cuttlefish has a - more or less- dorso-ventrally flattened body with fins like shirts on each side, which they use to move through the water. However, to move faster, they can make use of their hydro-jet propulsion, and then blow water from the mantle with great force through a narrow siphon. 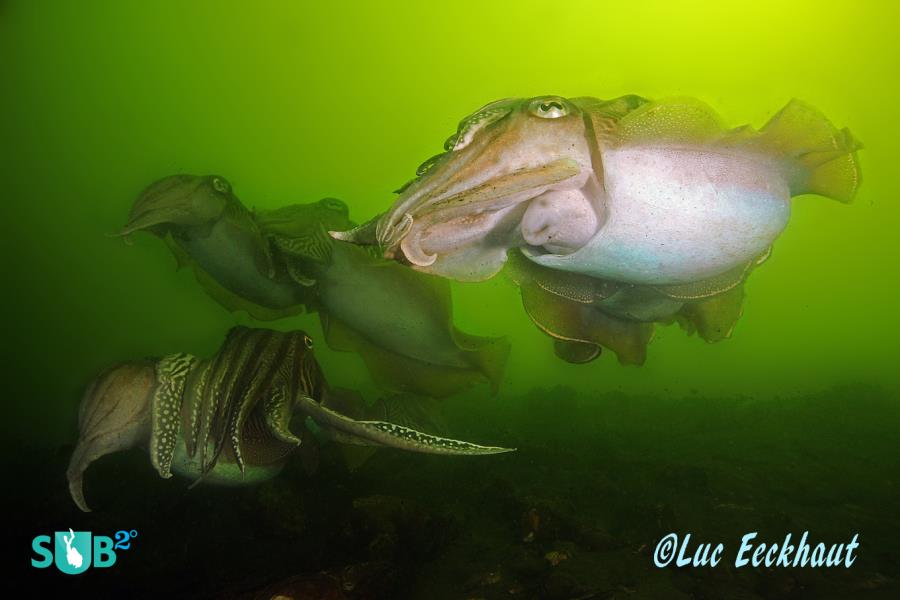 The global spreading of the cuttlefish is rather peculiar. They aren’t found near the American continent, the Pacific side, or on the Atlantic side, only along the coasts of Europe, Africa, Asia and Australia. They live in tropical and temperate waters, usually in fairly shallow water, with some exceptions to 600m. In total, there are about 120 known species.

Despite being widespread, most of those species, like corals and reef fish, are found within the Coral Triangle: Indonesia, Philippines and Papua New Guinea. Their length varies greatly from species to species. The smallest sepia is the “Idiosepius pygmaeus”, which lives in tide pools and has a length of 15mm. The largest is the “Sepia Apama”, measuring over 50 cm. 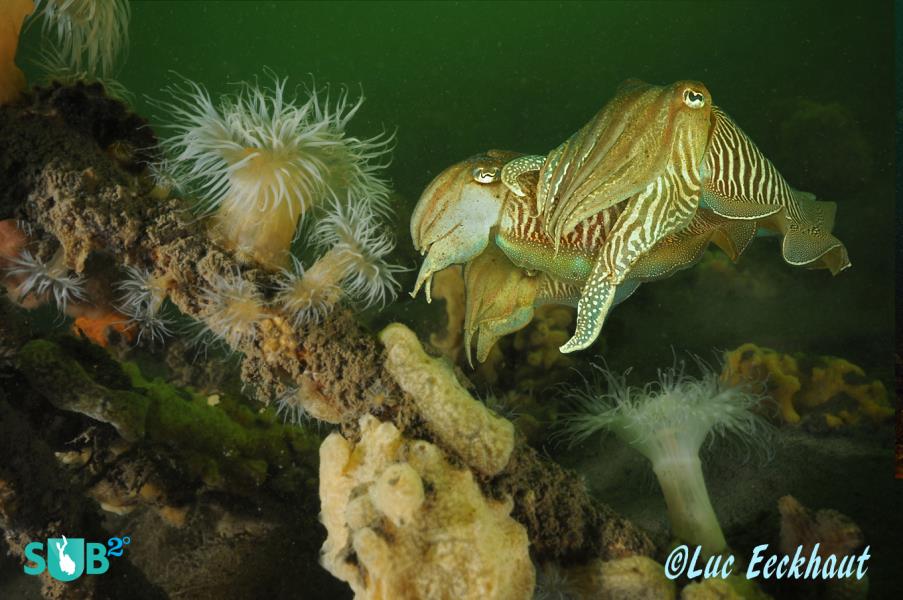 Each year, Belgian and Dutch divers can enjoy a beautiful spectacle that takes place in the “Oosterschelde” (Estuarium). When the water temperature rises above 10 °C, tons of cuttlefish swim up the “Oosterschelde" (Eastern Scheldt River) from the North Sea. They are the species “Sepia officinalis”, and they come from the Bay of Biscay and the Atlantic Ocean further south. These animals migrate to the “Oosterschelde” to deposit their eggs.

Here, divers can experience some of the most important parts in the life cycle of the cuttlefish, namely “the courtship”, “the mating”, “egg deposition” and the “release” of the eggs. One should know that cuttlefish always return to the place they were born to place their eggs, something similar to salmon and frogs.

Once they arrive on the “spawning grounds”, the males start looking for a suitable partner. Then they court the female. Once a pair is formed, they can start mating. The male brings a sperm packet inside the mantle cavity of the female. 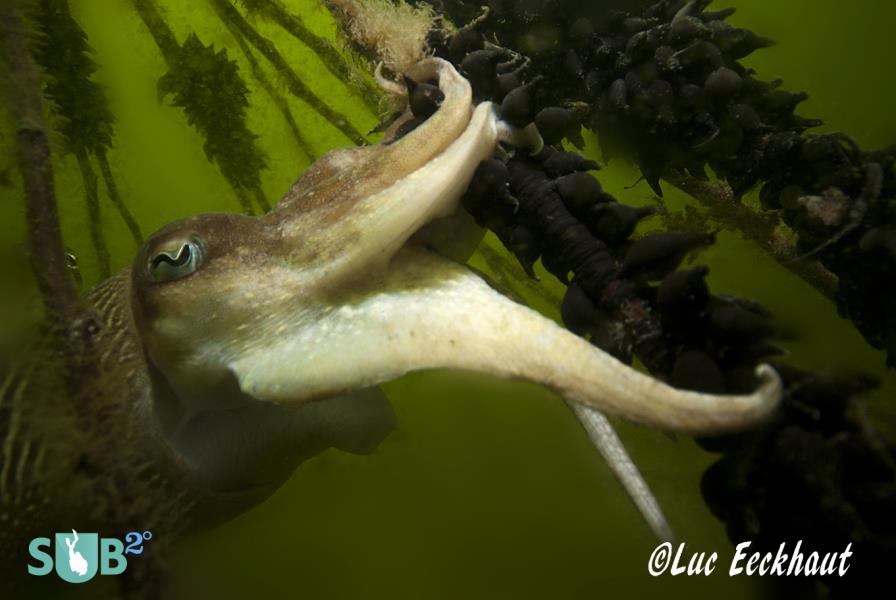 As this happens, the animals are face to face, in a sort of “Gordian knot” position. Even after fertilization, the male remains in very close contact with the female and he continues to chase rivals. Together then, they look for substrates where the female can deposit the eggs on.

Fortunately, some smart divers got the idea to put suitable substrates, such as branches in places that are easily accessible for divers, which makes observing and photography easier. The eggs of the “Sepia Officinalis” are black, and look like small grapes. Other species of cuttlefish lay eggs that are white or transparent.

So the female places a bunch of eggs on regular intervals on the substrate. That may be 3000 - 8000 eggs per female. Gradually the eggs become paler, and after a few weeks, the young sepias come out. 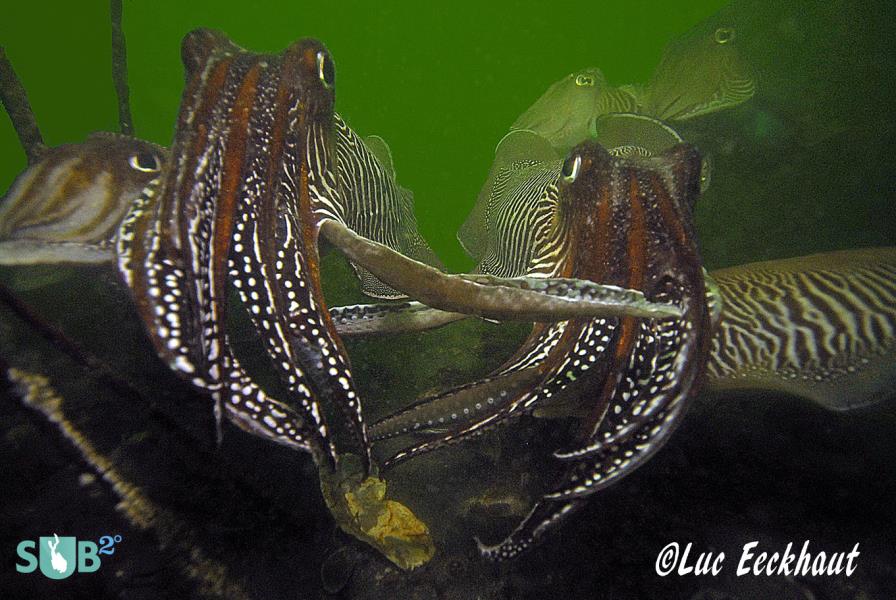 Once the young cuttlefish are large enough, they swim back to the North Sea, in order to migrate to their feeding grounds through the English Channel. The adults usually die after egg deposition. A single male can sometimes survive, and have a second mating experience the next year.

The “Sepia officinalis” is totally harmless to humans; on the contrary, the sepia is commonly found on the human menu. However, Sepia are not just fished for culinary purposes. Even going back to ancient Roman-Greek times, the Cuttlefish were used for the extraction of a brown-black dye.

Even in photography, we still refer to the brown dye when we talk about a “sepia photo”.

All Other Articles by Luc Eeckhaut

Scuba Diving in The Netherlands

Directory of Dive Sites in The Netherlands

Directory of Dive Shops in The Netherlands