Red-lipped Batfish-A Strange Alien Ready for a Night Out

The red-lipped batfish (Ogcocephalus darwini) has to be one of the most bizarre fish a diver can hope to see. With eyes on the ends of short stalks and mouth the color of freshly applied lipstick, this fish has a truly alien physique. 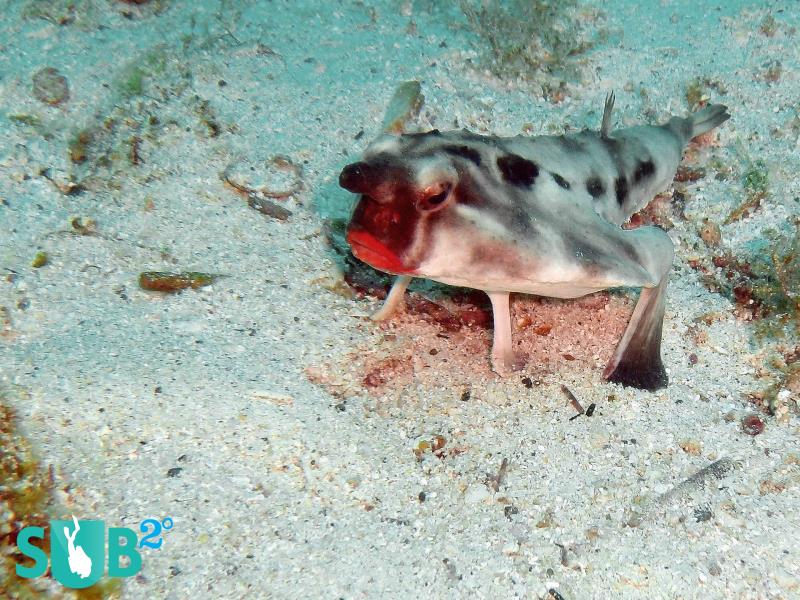 This fish’s scientific name, darwini, is actually a much more telling name than its common one. It is named after the great naturalist because of its range (the Galapagos islands) and because it is such a powerful example of the fascinating forms life can take under the forces of natural selection.

The common name is actually somewhat unclear, as multiple types of fish have been referred to as batfish. The large, laterally compressed reef fish of the genus Platax are most likely to cause confusion. The red-lipped batfish are very different from their Indo-Pacific cousins. They are actually a type of anglerfish, meaning they sit still and wave a specially adapted lure to attract prey. Because of their mostly sedentary lifestyle, they are a fairly easy fish for divers to observe. However, you have to find one to observe it.

Red-lipped batfish live in around thirty meters depth and below. So, while they are in range of divers with some experience at depth, they are not denizens of the lusher, shallower areas more popular among recreational divers.

Even if you never get to see one up close, the red-lipped batfish is a humbling reminder that life takes every sort of shape you could imagine. Some Galapagos animals are so charismatic they can’t be missed, such as sea lions, iguanas, and blue-footed boobies. Others are content to sit on the seafloor and wait for someone to notice their pretty red lips.

Have you ever seen this strange creature?