Home Why Does Pollution Really Happen?
0
3

Over the last couple of weeks I have been educating myself on Plastic Pollution, Ocean Pollution and even pollution just in general as a social phenomen.

I think its important to understand not only 'what is' happening, but also analyze why this happeneing.

Frankly, I'm a realist, and I honestly don't believe in the likelihood of a planet wide awakening based on some unfathomable high morals, atleast in the near future and would like to take a little more pragmatic view on this 'social phenomenom'.

Any discussion of such a matter must carry a constructive, and in my opinion optimistic view of bright feature.

My goal is to try and share some of my thoughts on the axiomatic core of why pollution occurs generally.

I'm not naive to assume that people are inherently evil and intend to do damage intentionally, rather on a systemic level our society has evolved and become very complexly structure.

Most of the world around us, and even the sustainability of our oceans can be explained by economics if looked at it from behind a certain set of goggles.

Economics has a very pivotal understanding known as an 'externality';

Infact, pollution is the most commonly used examples of a 'negative externality'.

Very simply - it is a cost or benefit that is not part of the equation, and the only way to account for it is to bring it into the equation or 'internalize the externality'.

Note: if you are an advanced economist - please forgive this amateurish gibberish.

Mr. Wang's business isn't unique and is far from a monopoly.

Infact the businesses in the area easily substite each other and thus there is a very rigid demand for products, and $20/toy is basically what everyone sells at. 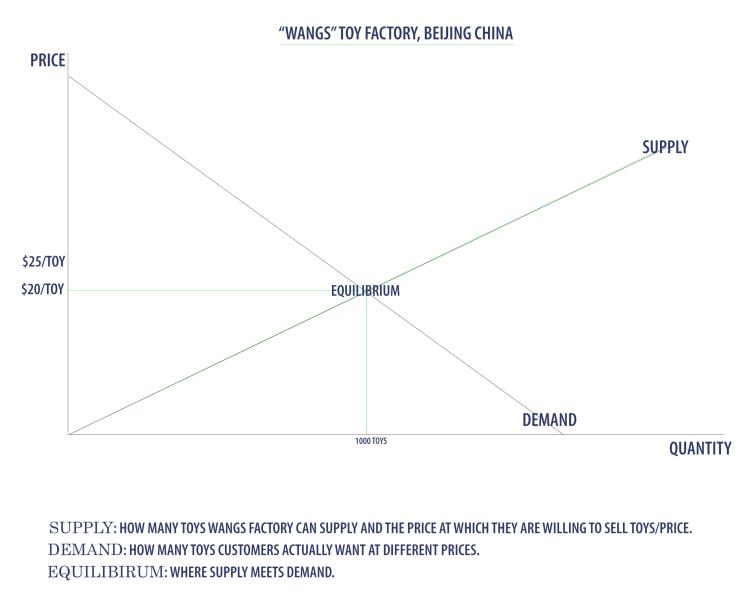 Here is the issue, at the moment the factory is gushing out strong industrial pollutants into the air and into the sewage. Hypothetically there is a 'cost' imposed on nature because in theory this damage should be cleaned up - this is a 'negative externality'.

Alternatively, the factory would need to set up a filtration system that would cost another $5/toy to mitigate 95% of the damage done and thus adress the cost and thus 'internalize the negative externality'.

Now, even if the owner of the factory recognizes that he is simply growing an unclaimable debt with nature and wants to live more sustainably, he will have problems.

Lets say he decides to implement the filtration system, lets see how this affects his numbers.

#Scenario 1: He Adds The Cost to the Product

Lets say he shifts the cost of the filter down the line and now sells his toys for $25/toy.

At that price point, the market is only willing to buy 700 toys from him bringing him a revenue of $17,500. 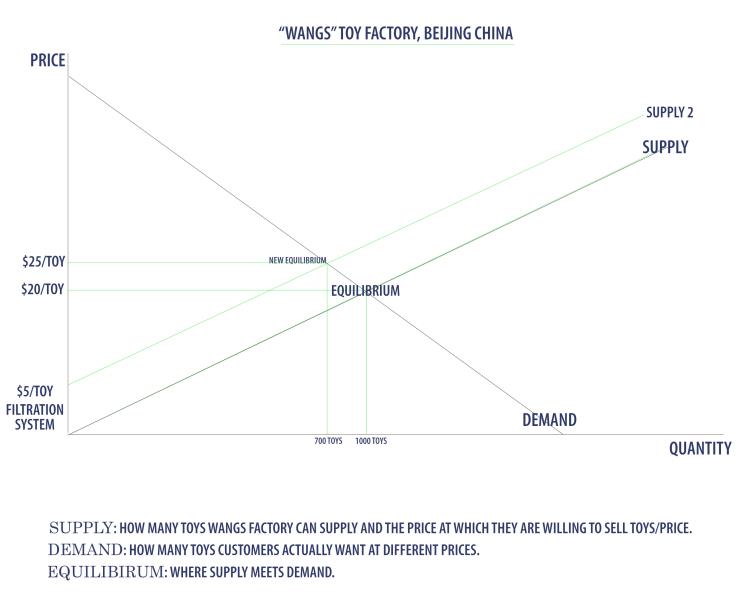 The harsh reality is worse however.

Beijings Toy Manufacturing Market is in Perfect Competition and the entire area in which Mr. Wang operates does the exact same thing that he does. This is known as a market in 'perfect competition'.

Infact, with the example described above, increasing the price of his product may actually reduce Mr. Wang's sales to zero and put him out of business immediately.

Most of the time, businesses in a 'perfect competition' economy are in a very tight race and barely any make any profit and operate at a price dictated by the market.

This is how the demand curve actually look in a perfect competition market: 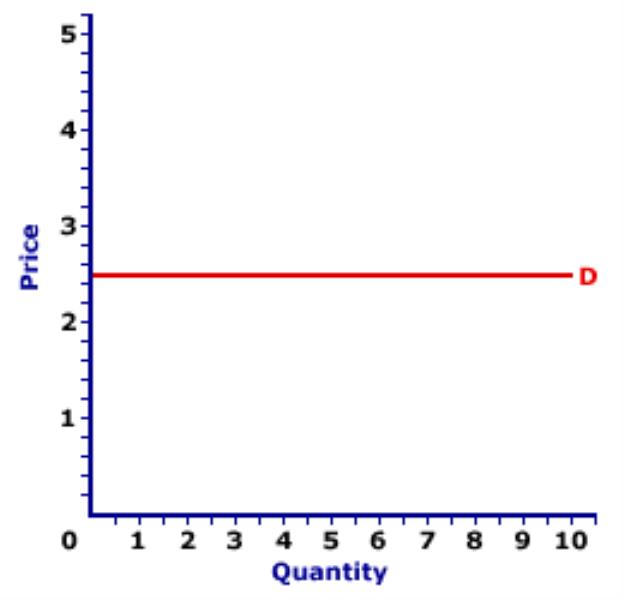 For the sake of argument, we'll continue this case study presuming that the rigidness of the demand in Mr. Wang's market isn't so perfect, and there is some downward slope.

Conclusion: Mr. Wang cannot increase his costs and even with the current market he is making minimal amounts of profit needed to justify his time and investment into this project. If Mr. Wang hypothetically was in an absolutely classic example of a market in 'perfect competiton', his sales would actually drop to 0 with an increase of $5 and put him out of business immediately.

As we have seen in the example above, Mr. Wang as a player in a perfect competition market (which btw majority of all markets worldwide are) cannot 'internalize this externality' on his own AND stay in business.

Now, what if ALL of his competitors were forced to do that?

The only way that this can happen (outside of an unlikely mass 'awakening' among people fighting for survival) is for the government to impose regulations across the industry.

Lets say the Beijing regional government imposes legislation that all Toy Factories in Beijing have to by law implement the $5/toy additional costing filtration/disposal system. 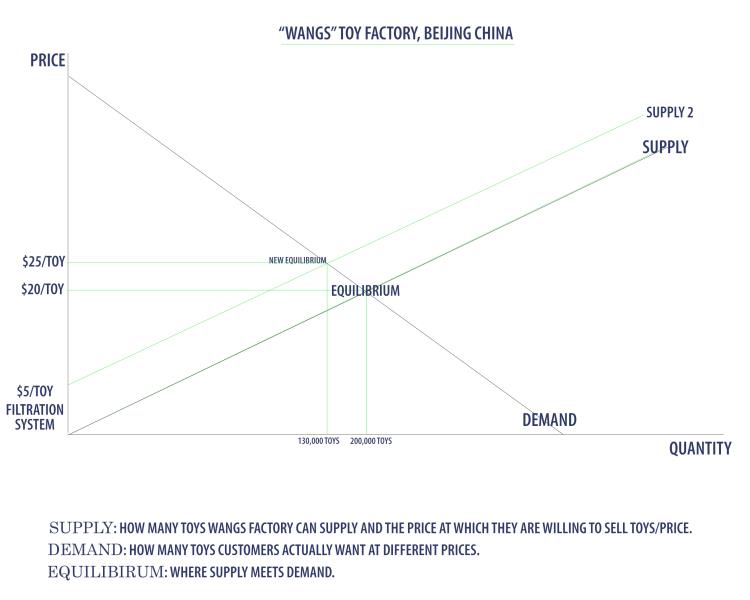 What happens to the numbers?

Since Mr. Wang and his competitors export their production to the US, they are in competition with producers from Taiwan, Philipines & Mexico.

The market is cut throat, and in reality, a price jump like that could possibly cut out their market from existence entirely - as seen with the hypothetical example of a 100% perfectly competitive market.

Lets sum this up, by introducing the legislation the government has:

On the other hand:

Conclusion: Government Legislation is definitely the primary method in which externalities can be internalized across the board however the only way that the government will do that is if there is a societal push for it.

In most countries, there is a varying scale of crony relations between government & big business, thus to expect that a government would proactively pursue such measures is unrealistic, atleast historically.

Thus, whether for the better or for worse - the only way that a piece of legislation can be enacted to protect the 'common' good is if there is a sufficient pressure from the relevant 'community'.

The problem however extends across borders, and as discussed above, if the Chinese government for example passes such legislation, it will lose ground to another country that won't.

Thus, the only way that this can be affected on a global scale is if the consumers are 'educated' and 'conscious'.

Lets look at this from another angle.

Lets say that the government does not pass this law and Mr. Wang decides to take on changing the system alone, against all odds, and he places a little mark on the bottom of every toy sold marking it as 'Sustainably Disposed Plastic Material'.

Now, lets say for a second the consumers in the US are aware of the difference between normally produced plastic toys and ones whose waste by product is disposed of carefully, and lets say these consumers are happy to pay the $5 difference the toys they normally buy and this sustainable variant. 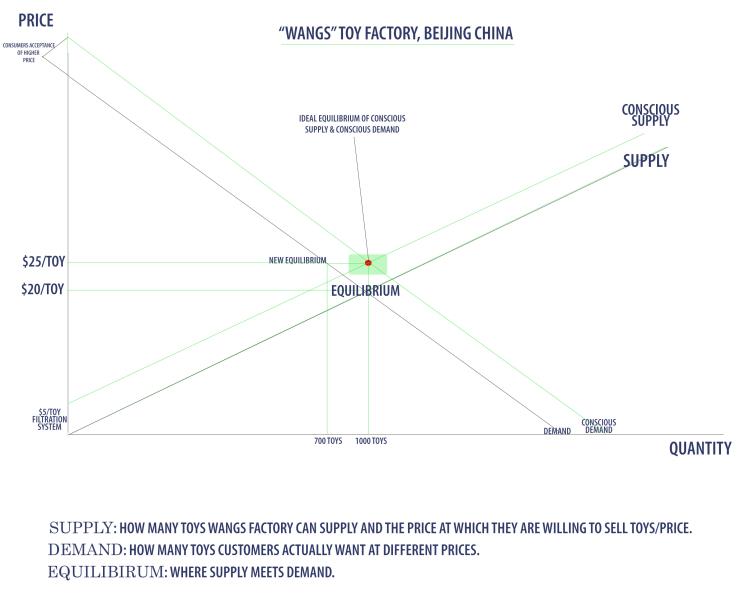 Suddenly, Mr. Wangs business doesn't look so bad. He is still selling the same amount of toys, he is still making the same profit margin and his business is not polluting the environment.

In reality, this is the only solution globally and it applies to every product, market, person & part of the world.

There are only 2 ways to affect the 'economics' that place us in a world in which most externalities are not factored into the equation but need to be.

This is not limited to electing a president or joining one of the 3 parties.

Government exists on many levels, and its useless to assume some sort of conspiracy that trickles all the way to the lower levels of government, even if the upper tiers are documented to be corrupt.

These lower tiers need to be addressed first.

If there is a factory polluting, it must be forced to comply with reasonable and adequate legislation that is demanded by the residents whom the government represents.

Consumers need to be careful which products they purchase and spend some time to educate themselves on the variations of the product and the implications of it, versus using price as a sole factor for decision making.

This applies to far more factors than just pollution, it applies to things like products made through child labor, slave labor or products created as a result of wars/conflicts or even ones through unfair trade agreements.

The simple reality is that consumers do not pay the full price of any good or service, pretty much ever.

The Activity in which we partake in creates a positive externality (generally), by creating economic value to maintaining coral reefs and other parts of the sea/body/lake/river/ocean in pristine condition.

By simply diving and spending money on this hobby, we partake in marine conservation.

Especially if the diving 'community' supports businesses that are deeply entrenched into supporting the local economy and hire locals.

Due to scuba diving, for example a dead manta is worth less than an alive one (purely in an economic sense).

Keep diving & educating yourself about what we consume, where it comes from and where it goes!