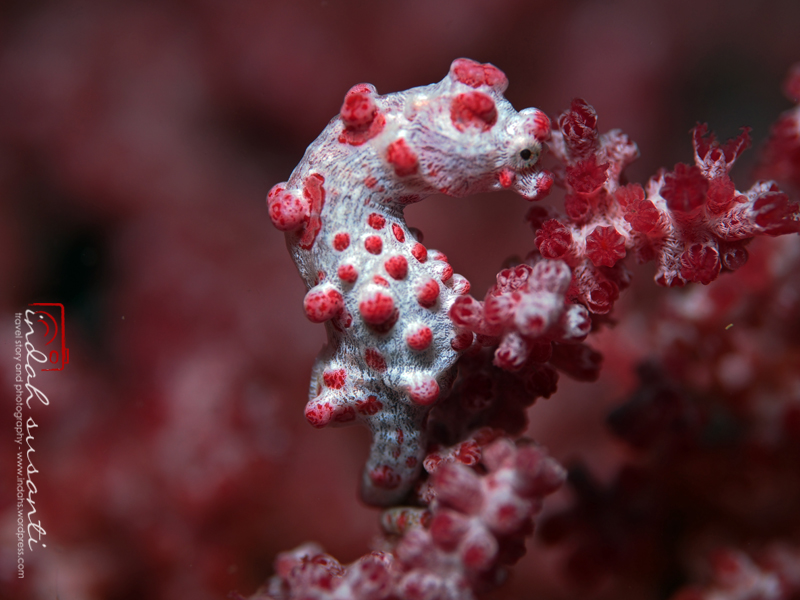 In Indonesia, North Sulawesi Province, between of two famous diving destination Bunaken and Lembeh Strait, there is an island called Bangka (Regency of North Minahasa). The entire coastal area of ​​North Sulawesi is known for its impressive marine biodiversity, terrestrial of tropical forests and unique native animals such as tarsier monkey.

Yet, the island is facing a threat: a decision made by the mainland government to mine two third of the 4700 hectares island with support of Chinese company’s investment, threatening the livelihood of its residents whose majorities are fishermen and destroy its marine life biodiversity.

Coelacanth fish sights in Bangka were seen by Indonesian marine researchers, and reported that at least there were 19 coelacanth fish live in the waters surrounding the island. Aside to that, when I was diving in Bangka Island, I was impressed by numerous critters, fishes, beautiful corals and underwater landscape.

Unfortunately, the island is facing a threat after a decision made by the mainland government to mine two third of the 4700 hectares island for its iron ore. According to Indonesian Laws, the island is categorised as small island and should be proctected from heavy industries including mining.

An Island for Macro Photography Lovers

It was raining when we started our first dive at Dive Site Tanjung Hisu Dua. I felt the warmth of tropical Celebs seawater as I entered the water. Dolfie Bawole, our dive guide, was descending before us, dove to the reef walls. I dove following him into 20 meter deep, then we found her.

A dark brown tiny seahorse, with her tail hanged on greenish colored algae: a severn pygmy seahorse! I have never realized how tiny she is in reality. On the same site, Dolfie also showed us the second pygmy, two bargibanti, hanged at purple-pinkish gorgonian coral.

There are three species of pygmy seahorses that can be found in Bangka Island: Pontoh, Severnsi and Bargibanti. With their size less than two cm, it was nearly impossible to find pygmy seahorse without the help of an experience dive guide. I have read the pygmy is sensitive to camera-strobe lights; therefore I limited myself to maximum of five photo-shots and at the lowest strobe’s flare level. Sincerely, it was not easy to take picture of these tiny celebrities who kept showing their backs at their admirer. 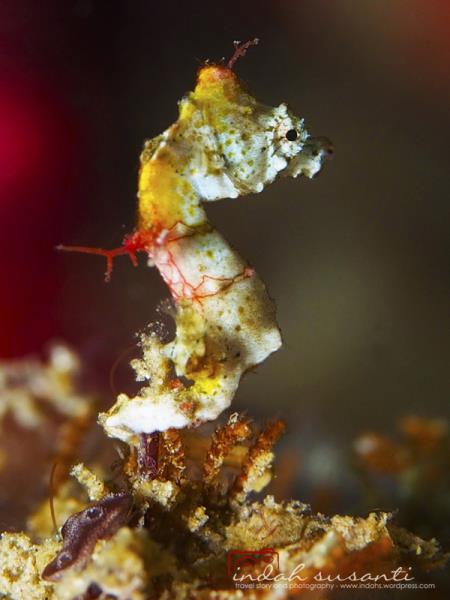 Besides of pygmy seahorses, Dolfie was eagerly showing us variety of nudibranch. Some of them with the size of less than 1 cm and the biggest one with size almost 10 cm. For the first time I saw Bornella Anguilla, a nudibranch with black eye spots and red mosaic pattern in its body that makes it looked like a little dragon. In addition, we spotted many alien-looking animals like the marble shrimp, hairy squat lobster, and mantis shrimp. Meanwhile, eel moray, crocodile fish and scorpion fish could be seen almost in every dive sites we visited. 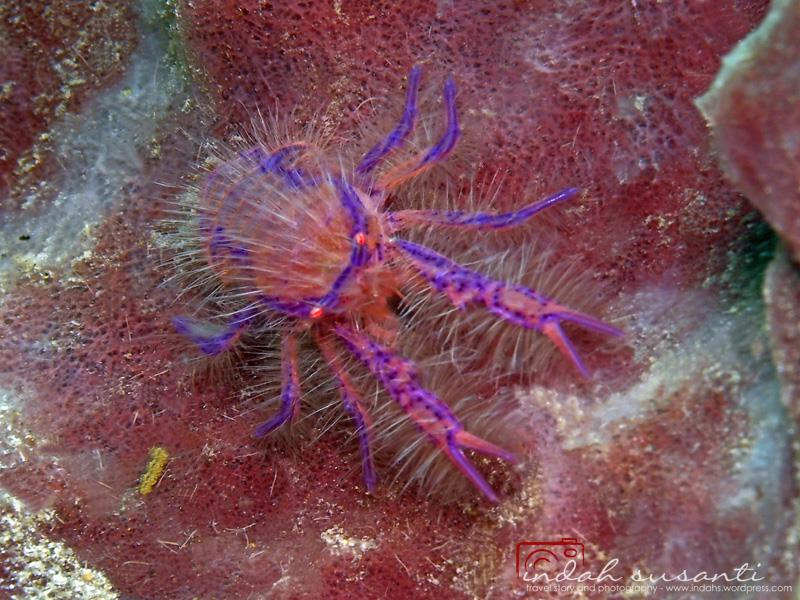 An Island with Unique Underwater Landscape

The underwater landscape of dive site Sahaung had made me wonder what it used to be in the past. When entering this beautiful dive site, we were welcomed by schooling of fusilier fish. We further dove to an underwater broad plateau, that looked alike a Buddhist temple floor with steps and walls of rocks formation that similar to ancient bricks. By the end of it, we found a huge table coral that would make it as an altar table of the temple where the baby sharks hides underneath. It felt surreal when witnessing such landscape for the first time; it was hardly believed that it was naturally formed.

Dive site Batu Gosok also offers interesting landscape, view of series steep pinnacles that go up from the ocean to the surface. The current could be very strong in this dive site. However, there were some spaces in between corals wall where divers could hide from the current. Terrestrial part of the dive site was stunning overlooking the rocky cliffs and green landscape. 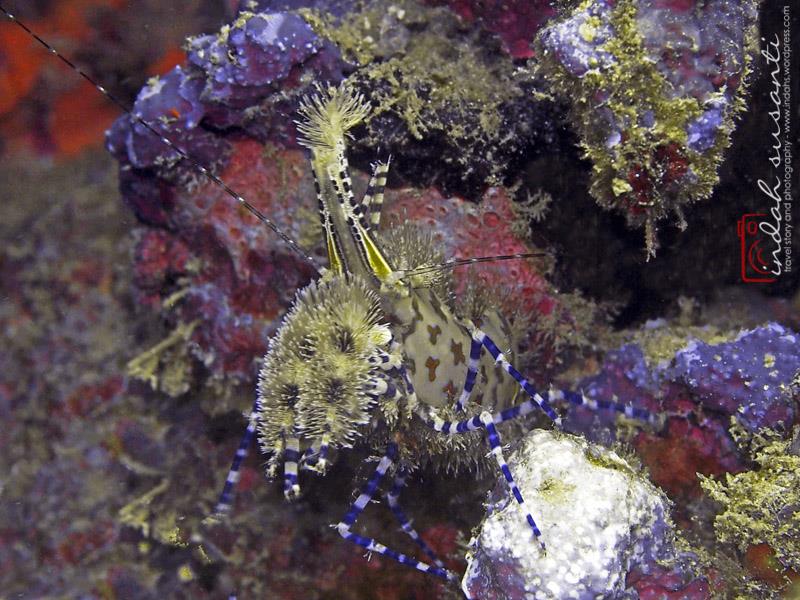 An Island where Endangered Species Live

Some part of the island, like Dive Site Lihunu Garden, has large sea grass field, which is the food source of endangered species dugong. Although we did not see any dugong during our dives, Bangka fishermen and dive guides have seen them. The dugong could be seen around three days before the full moon and when the water is clear.

An Island in Trouble

It is hard to imagine what Bangka Island and its underwater in the future after the mining started on early year 2014. One thing for sure, the mining has recently destroyed one of dive sites that famous for its unique marine species: frogfish. The dive site is now covered with rocks and landfill.

The iron ore mining permit that issued by North Minahasa Regent has relocated two from four villages in the island. It also takes over some part of the protected rainforest in the island. I am not a mining expert but I can imagine if the company used the well known common method by blasting the iron-ore bearing rock and dug up from open pit mines, the consequences are disastrous for a small island like Bangka. During the rainy season, the soil sedimentation after the blasting process will go down to the ocean and it may cover the corals and the sea grass field, the living source for fishes, sea-critters and dugongs. 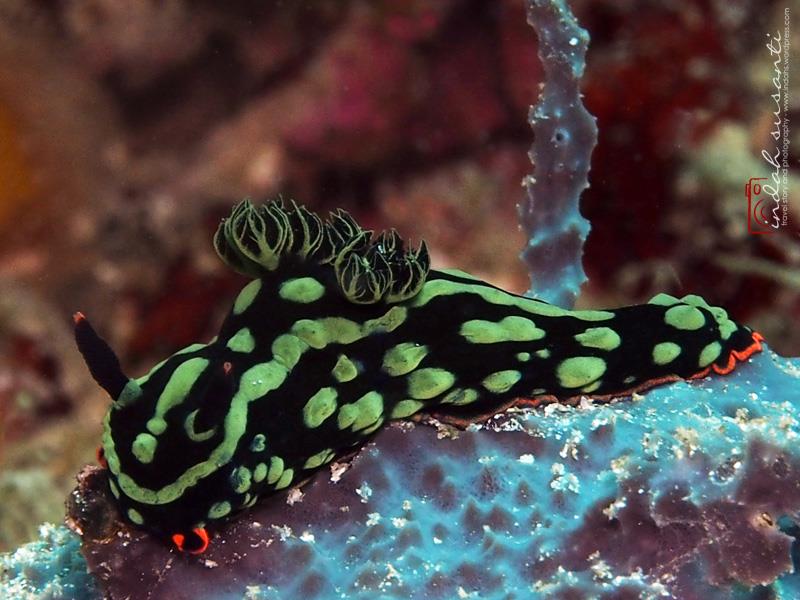 Rejection to the mining has been voiced in social media like Facebook and Twitter. An Indonesian famous rock singer,Kaka Slank, who has been diving in Bangka Island, step in to protect the island and the fishermen’s livelihood. He organized an online petition with the support of Change.org, Greenpeace, Indonesian’s Friends of the Earth and local NGOs, Tunas Hijau and LMND to reject the mining. Despite of numerous rejections, the local government seems ignore them and continue its mining plan. Currently Bangka Conservation Fund is established to support the residents in Bangka Island through legal process. The fight to protect the island is not over yet, it will continue until the local government stops the mining plan. 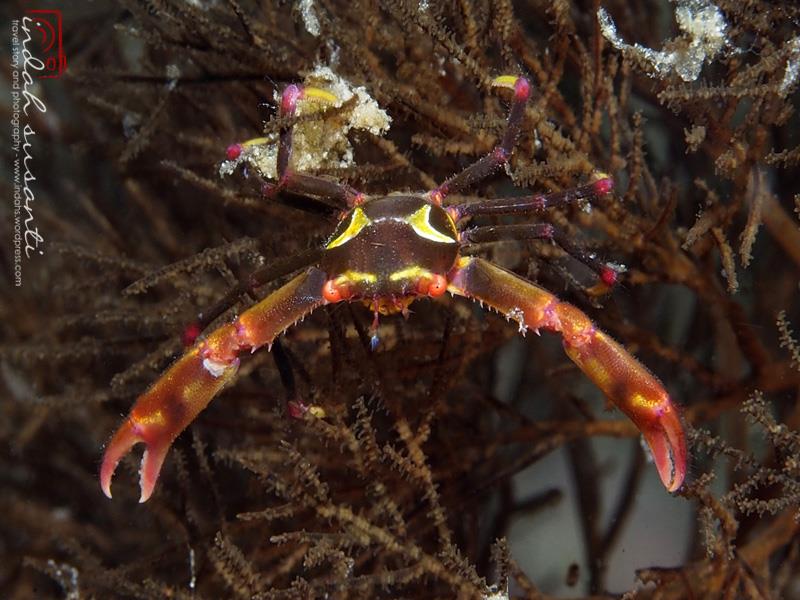 If you like to get involved with the conservation of Bangka Island, please sign the petition and contribute to the fund. Both links can be found in the side-bar.