There is just something about jellyfish. Maybe we are drawn to them because they look so beautiful, with their long appendages and pink and purple colors, or how they move gracefully through the water as if they’re flying. Sadly, we know we can’t touch them or we will suffer the painful sting of their nematocysts. For all of us jellyfish lovers, there is a special marine lake in the Rock Islands of Palau, known by the locals as Ongem’l Tketau and known to the tourists as Jellyfish Lake, filled with a species of non-stinging jellyfish.

The lake is estimated to be around 12,000 years old, and during that time, the jellyfish living in it lost their defense mechanisms and no longer can ‘sting’ like other jellyfish species.

About an hour boat ride from Koror, and a short hike on Eil Malk Island, led to this amazing lake that is estimated to have over 13 million Golden jellyfish. I jumped off a wooden dock - reminiscent of my childhood days of summer lake swims - into warm waters as if it were any other lake in the world. 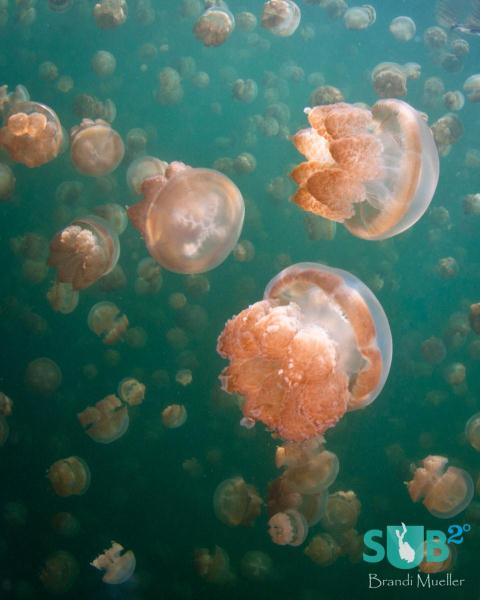 But as I swam out towards the center of the lake, away from the shadows of the surrounding jungle and into the sunlight, a few golden pink jellies appeared around me. As I swam to where the most sunlight shone on the lake, the number of jellies multiplied, and pretty soon I was bumping into them in front, behind, and below me. They were everywhere.

It felt funny at first; my instincts told me not to touch the jellyfish, unless my buddies were close by and needed to use the restroom! But it was impossible not to brush up against them, or for them not to brush up against me. Being brave enough to touch one, you'd feel they were like jello, smooth but not entirely solid. And there were just so many of them!

Only snorkeling was allowed in Jellyfish Lake, as bubbles could get caught under the jellyfish bells and damage them. Because they relied on sunlight to help produce energy, jellyfish are found right at the surface. So why do they need sunlight? The jellyfish have symbiotic algae that live in their tissues that help them produce their energy.

In order to get the most from their symbiotic algae, the jellyfish migrate across the lake daily, following the sunlight. At night, the jellyfish move vertically from the surface to deeper waters, to acquire nitrogen and other nutrients for their algae.

The Golden jellyfish aren’t the only creatures in the lake; there are also moon jellyfish (Aurelia sp.), cardinal fish, silversides, gobies, and the jellyfish’s only predator, anemones. An anemone will make dinner of a wayward jelly that ends up in its tentacles. But, by following the sunlight, it’s uncommon for the jellyfish to end up in the shaded areas at the edges of the lake, where the anemones live. 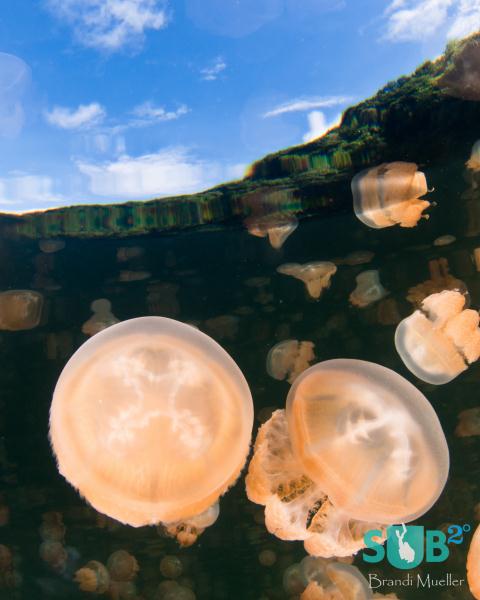 The lake itself is quite unique. Still connected to the ocean through fissures and tunnels in the lime stone, it experiences slight tidal shifts. However, it doesn't seem that other organisms have found their way into the lake. The lake has two distinct layers: the upper layer being oxygenated, and the lower being anoxic, or oxygen-free. All organisms that require oxygen live above 50ft.

The depths of the lake can also be dangerous to humans, as hydrogen sulfide rises from the bottom of the lake, and purple photosynthetic sulfur bacteria separates the oxygenated layer from the anoxic and contains high concentrations of ammonia and phosphate, which can poison divers through the skin. This is another reason why diving is prohibited in the lake. Being near the surface is perfectly fine though. 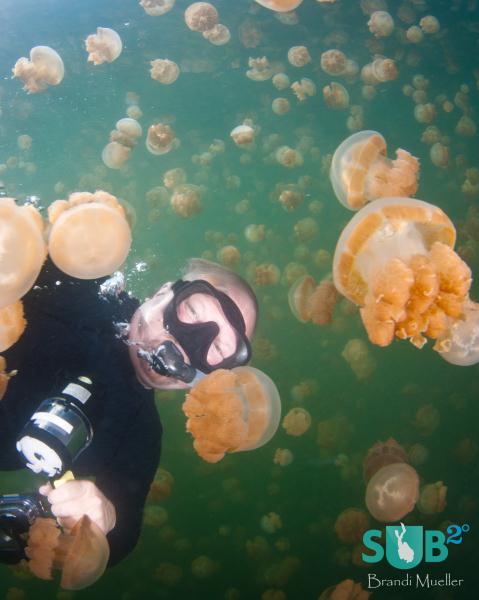 At least four other isolated marine lakes in Palau have jellyfish and each is thought to be diverse enough to be its own unique subspecies. Ongem’l Tketau, however, is the only lake open to tourists. The Golden jellyfish of Jellyfish Lake still have their stinging cells (nematocysts) but they've lost their severity. Regardless, some people can still experience sensitivity around their mouths so those who have severe allergic reactions to jellyfish may want to wear protective clothing.

Any trip to Palau should include a visit to Jellyfish Lake. Snorkeling with millions of non-stinging jellyfish is a very cool experience and shouldn't be missed!

You can find some useful information about Diving in Palau here and a directory of Liveaboards in Palau.

Have you been diving in the Jelly Fish Lake?