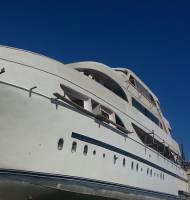 No dive logs have been tagged to Sri Lanka Aggressor yet. Would you like to be the first?

During the Whale and Dolphin snorkeling weeks, guests will have the opportunity to snorkel with up to thirteen species of whales and eight species of dolphin. World renowned marine naturalist Howard Martenstyn will be onboard to offer education information on behavior patterns. Over the last 15 years he has documented over 3000 whale sightings around Sri Lanka. Thirteen species of whales reside around the island of Sri Lanka including blue whales, sperm whales, humpback whales, beaked whales, melon headed whales, pilot whales, and false killer whales. Two of the predominant species that are resident in Sri Lanka, are the sperm whale which averages 40 - 60 feet and the blue whale which averages 60 - 100 feet long and weighs up to 200 tons. During the Whale & Dolphin weeks, guests may also see up to eight different species of dolphin. These weeks depart from Trincomalee and Colombo depending on which charter you are on.

The recreational diving itinerary, West Colombo & Northwest Kalpitiya, departs from Colombo to explore beautiful wrecks and reefs. Half the week is spent exploring the wrecks and the other half venturing north for drift diving along lush coral reefs. The wreck dives may include: the Thermopylae Sierra, Chief Dragon, Taprobane, and Trug. With warm coastal waters and the continental shelf only 5 to 10 kilometers out from the Sri Lankan coast, Sri Lanka is guaranteed a wealth of coral and marine life all year long including dozens of ship wrecks that have become artificial reefs for local fish species and are easily accessible to recreational divers. One morning guests will have the opportunity to snorkel with the whales and dolphin.

Sri Lanka Review text is required Review etiquette
Review rating is required
Please try to be objective and avoid using personal interactions as the basis for a positive or a negative review. Any professional members using the service to gain a competitive advantage over their competitive will be banned from the service.
At least one dive site or dive shop is required for review Add Media Done 0 selected
Tweet