Directory of 30 Dive Sites or Spots for Scuba Diving in Saba, Caribbean Netherlands

Saba has exceptional scuba diving around the 30 pristine dive sites; the Caribbean Sea teems with a rich diversity of marine life. Diving is year-round, but there are seasonal differences in water temperature. In winter months the temperatures range from 77-80°F; in the summer months it warms up to around 80-85°F. A long 3mm should be adequate, unless you are doing a lot of deeper diving.

All levels of divers are catered for in Saba, with plenty of dives to suit every experience rating. Spectacular volcanic formations add interesting topographical features to the shallower the patch reefs. Deep-water pinnacles and seamounts are covered in huge sponges and corals and circled by schools of fish. The dive sites can be categorized into five main areas: The Pinnacles, The Windwardside, Tent Bay, Ladder Bay, and Well's Bay/Torrens Point. The Windwardside is the most weather dependent; Well's Bay and Torrens Point offer more protection on the northwest of the island.

Saba’s world-famous pinnacles and seamounts include Third Encounter, The Eye of the Needle, Twilight Zone, Outer Limits, Mt. Michel, and Shark Shoals. Covered in sea fans and sponges, the pinnacles dramatically descend to depths beyond recreational diving limits; the dive operators normally set maximum profiles of 35-40m (120-130ft). Schools of reef fish, large groupers, and horse-eye jacks are common. Nurse, reef, and blacktip are the most common sharks to see in this area, however, there is the chance of glimpsing rare hammerheads, bull, or tiger sharks too. These offshore sites are where you may get a special encounter with larger pelagic such as manta ray. Man O’ War Shoals, Diamond Rock, and Green Island are shallower pinnacles, but just as interesting, with sandy bottoms at 21-24m (70-80ft).

The Windwardside sites include Greer Gut, Giles Quarter, Big Rock Market, Hole in the Corner, David's Dropoff, Core Gut, and Cove Bay. These Atlantic-facing dives are mostly sandy-bottomed, with volcanic coral-encrusted boulders. Hard corals such as elkhorn, plate, and boulder dominate; visibility is normally very good. Divers will also notice the variation between the species of creatures and fish, to those found on the Leewardside sites.

Custom House, Porites Point, Babylon, Ladder Labyrinth, Hot Springs, and Ray 'n' Anchors make up the dive sites of Ladder Bay. Hot, sulphur-stained sand demonstrates the volcanic origins of the island; it is the old lava flow that has shaped the underwater topography of spur and groove formations. Nurse sharks and tarpon are common to see, and the sea grass encourages grazing fish life such as turtles, eels, eaglerays, and seahorses.

Tent Reef Deep and Tent Reef Wall are both great dives located in Tent Bay. Garden eels, razor fish, and southern stingrays are a highlight. Black corals decorate the swim-through at Tent Reef, and bright sponges and corals cover the thrilling vertical wall dive. Buddha, is the resident barracuda to look out for!

Well’s Bay and Torrens Point are highly protected by their position on the northwest coast. Perfect for shallow dives, there is lots of time to admire the wide variety of eels and creatures. Large boulders intersperse patch reef with small caves and swim-throughs. 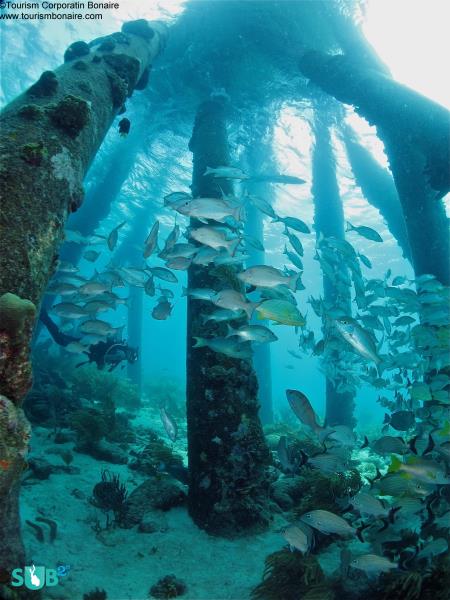