The small island of Sint Eustatius, also known as Statia or Statius, is a special municipality of the Caribbean Netherlands. Saba, Sint Maartens, St Kitts, and St Barts are the neighboring islands, making up part of the northern Leeward Islands. Endearingly called "The Golden Rock", the 8 sq. miles are home to around 3500 inhabitants. Its turbulent history of sea faring and piracy is long past, and now this quaint, peaceful island is a haven for nature and relaxation.

Saddle-shaped Statia, like many of the islands in this area, is a product of volcanic activity. There is a dormant volcano called 'Quill', with a peak of 802m that is very popular with hikers. 'Quill' is protected under the St. Eustatius National Parks foundation, as well as 'Bovem' (another dormant volcano area in the north). The islands 18 hiking trails are well maintained. STENAPA also protects the beautiful Miriam C. Schmidt Botanical Garden, which is filled with the natural flora and fauna of the island. Highlights are the Antillean Iguana, the Red Bellied Racer Snake, a variety of orchids and cacti, and the endemic vine called the Statia Morning Glory.

The National Marine Park that circles the island is the third area that is protected by STENAPA. It extends to a depth of 30m (100ft) and was established in 1996. Two areas of the park are designated as no fishing or anchoring. This ensures that fish stocks are protected, and that the marine ecosystem stays diverse. The Dutch islands are very proactive with sustainable eco-tourism. The National Marine Park installed 42 diving, snorkelling, and yacht moorings to protect the reef, and they also conduct underwater research.

There are some guidelines to diving in the Marine Park: divers are only allowed to dive through the local operators, and must purchase a marine park tag. There is no shell/marine life collecting allowed, and divers must not wear gloves. Fish are not allowed to be fed, but if divers see turtles or cetaceans, they are asked to report the sighting to the Marine Park. Historical finds should be left in place for all to enjoy.

The climate on Statia is dry and sunny. Year-round northeasterly trade winds provide a cooling breeze. The average temperature is 27 Celsius, which drops to a pleasant 23 Celsius at night. April, June, and September are the rainiest months, with common light showers. Water temperatures range from 26-28 Celsius - a long 3/4mm wetsuit is adequate.

Sint Eustatius has 36 marked dive sites, and there is flexibility to dive them in various ways. There are distinct topographical regions underwater; many reefs have formed on the remains of the Bovern and Quill volcanic areas. In the north, lava blocks, boulder slides, and shallow lava flows (called lava fingers) create interesting formations that have been fully colonized by the colorful sponges and corals. Spur and groove lava formations characterize the southern reserve area.

The island has a good mix of stunning shallower dive sites and exciting advanced dives. These well-protected reef systems are home to a wide array of Caribbean reef fish and creatures. The most interesting residents being flying gurnards, eels, frogfish, seahorses, spotted drumfish, octopus, various rays, sharks, and turtles.

The dramatic walls and pinnacles are visited by the larger pelagic such as grey reef sharks, eagle rays, hawksbill and green turtles. Volcano Fingers is a great advanced level dive on a deep wall reaching a depth of 40m (130ft). There is no mooring at this site, so divers descend into the blue until they find the volcano fingers. A lava flow canyon leads divers to slowly ascend shallower up to an area called Humps. Seahorses nestle in the vibrant corals and sponges. Turtles are frequently seen in the area.

There are many wrecks in Statia, dating back to the time when it was a major trading post in the 1700s, up to modern-day ones. Common life around the wrecks includes snappers, horse-eye jacks, barracuda, rays, and turtles. The Charles L. Brown is a magnificent wreck measuring 100m (327ft). Purpose-sunk in 2003 to a depth of 30m (100ft), she was a cable-laying ship built in Italy. She now sits on her side, with a good remaining superstructure, and is a stunning sight to see underwater, with lots of photo opportunities. Trained divers can penetrate this wreck.

For divers who like macro or archeological sites, Blue Bead Hole is perfect. With a maximum depth of 18m (60ft), divers can spend plenty of time looking for unusual creatures such as the beautiful flying gurnard. Another major highlight at this site is the chance of finding historical artifacts. Clay pipes, pottery, and Statia's famous blue beads - originally used to pay slaves- can be found. But remember to look and not take!

There are three dive operators on Sint Eustatius - Golden Rock Dive Center, Subaqua Dive Center and Dive Statia. All of the centers have nitrox and equipment rental. Statia's dive centers have highly experienced diving teams, with a mixture of Statian and international staff, and very good safety records. Many instructors are multilingual with the predominant languages being Dutch, English, and Spanish. There is a recompression chamber on the island.

Subaqua Dive Center prides itself on having over 60% repeat customers. Ingrid, Menno, Marieke, and Mike are the international owners and they are exceptionally passionate about the diving on Statia. The team speaks English, Dutch, French, German, Swiss-German, and Italian! Nitrox is free at Subaqua, and divers have unrestricted dive times on the 2-3 guided dives a day. The experienced instructors and guides take out small groups (6:1 maximum) on either Seahorse, a 26ft catamaran; or Yellow Boat, a 27ft speedboat. They offer PADI certification courses up to divemaster, and CMAS training up to level 4. Photographers are well looked after by this professional and motivated center.

Golden Rock Dive Center is a PADI 5 Star Resort and National Geographic Dive Center. Owner-operated by friendly Glenn and Michele, Golden Rock offers a flexible service to suit visiting divers needs and desires. A top priority of the small team is the comfort and enjoyment of both returning and new divers, while on Statia. They have three dive boats: EZ- Goin is a 36' catamaran, Stumpy is a 32' custom dive boat, and The Dingy is a 14' hard-bottom RIB with ladder. Nitrox is available, and they normally run three guided dives a day. All of the PADI courses are available, as well as snorkelling, night diving, and fishing charters. It’s an organized, friendly, smaller dive center.

Winair operates five flights from Sint Maarten on a daily basis - with an approximate flight time of 20 minutes. The airport code for Sint Maarten is SXM and for Statia it is EUX. Air passengers can then make connections in Sint Maarten with the regional and international carriers. Caribbean Airlines, LIAT, KLM, American Airlines, Continental Airlines, US Airways and Air France are all scheduled airlines. Taxis and vehicle rental is available once on Sint Eustatius. 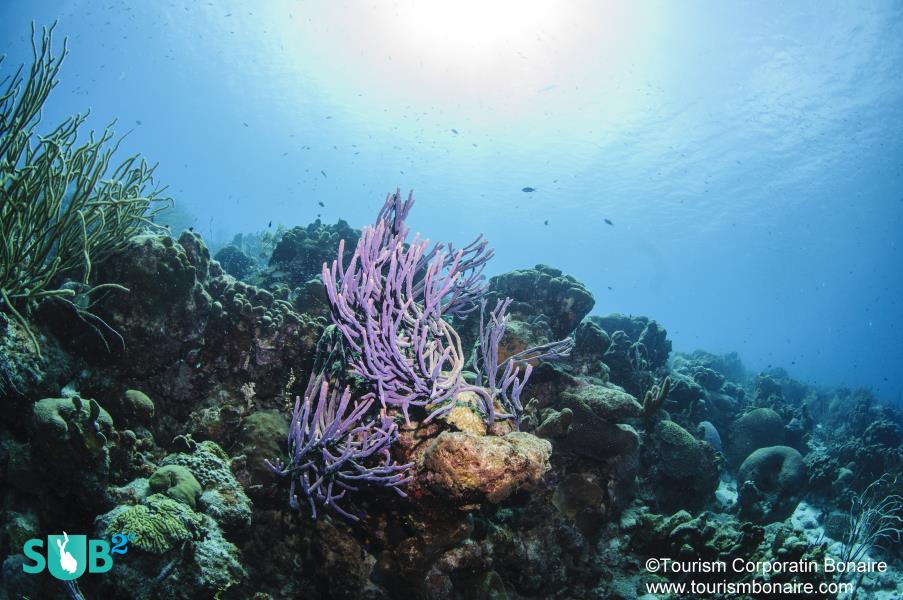 Sint Eustatius has 36 marked dive sites, and there is flexibility to dive them in various ways. There are distinct topographical regions underwater; many reefs have formed on the remains of the Bovern...

There are three dive operators on Sint Eustatius - Golden Rock Dive Center, Subaqua Dive Center and Dive Statia. All of the centers have nitrox and equipment rental. Statia's dive centers have highly ...

Bonaire; The Shangri-La of Shore Diving