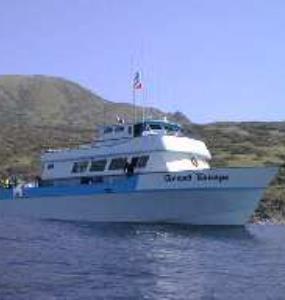 No dive logs have been tagged to The Great Escape yet. Would you like to be the first?

Tim began diving in 1973 when he got his L.A.County certification while in high school and is now a NAUI divemaster. Tim has logged over 4000 dives in California and has extensive personal knowledge of most dive sites. He has always been a avid lobster hunter and knows many great spots. He has made underwater videos and appreciates the needs of photographers. He met Captain Roy Kaiser the opening night of lobster season in 1977 on his first night dive and trip on the Rio Rita. Tim worked for Roy off and on until Roy sold the Rio Rita in 1980. In 1988 Tim and his brother bought their first boat, a 31' Trojan named "Bug Hunter." They kept Bug Hunter in a slip in San Pedro and extensively dove both Catalina Island and the Palos Verdes Peninsula. In 1990 he and his brother bought a 32' 1979 Super Luhrs, named "Great Escape, Jr.". On Jr. they dove all eight of the Channel Islands, and most of the known Southern California wrecks Tim bought the Great Escape (formerly the Charisma) in October 1996. His improvements to the boat, dedication to maintenance, and record of running great dive trips and has turned the Great Escape it into one of Southern California's premiere live-aboard dive boats.