What is Songkran and How its Changed Over The Years 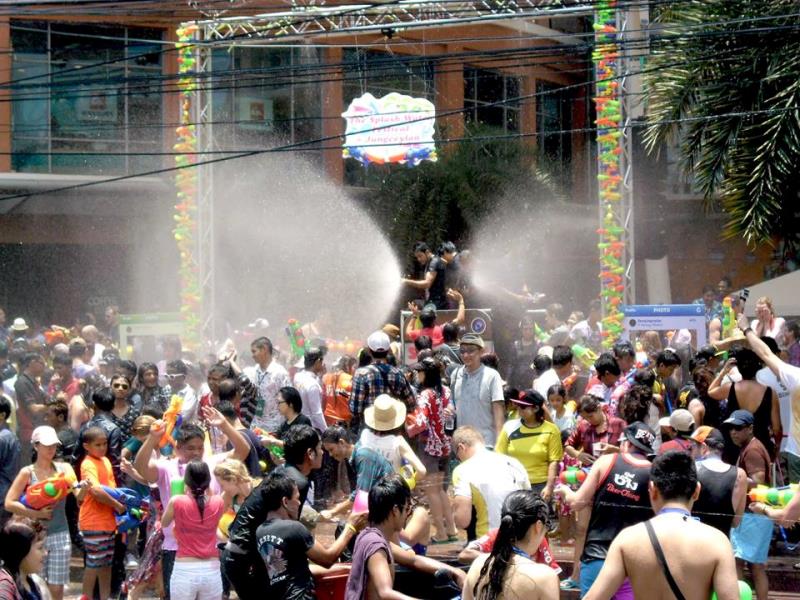 Every year many tourists literally flood to phuket thailand as well as many other locations for Songkran. All they know is its a big water fight. But why?? Yes in April its hot and almost the end of the "high" season and the rains are due back soon. its fun to have a water fight. But why?? There are plenty of other ways to cool off when in phuket scuba diving, snorkeling, surfing to name but a few. So why a country wide water fight. Even that not quite true as now the water fights have spread across the boarders to Laos, Vietnam too and spreading further each year. Well for those of you who come to phuket thailand each year for a good soaking here is a bit more information on the worlds biggest water fight. 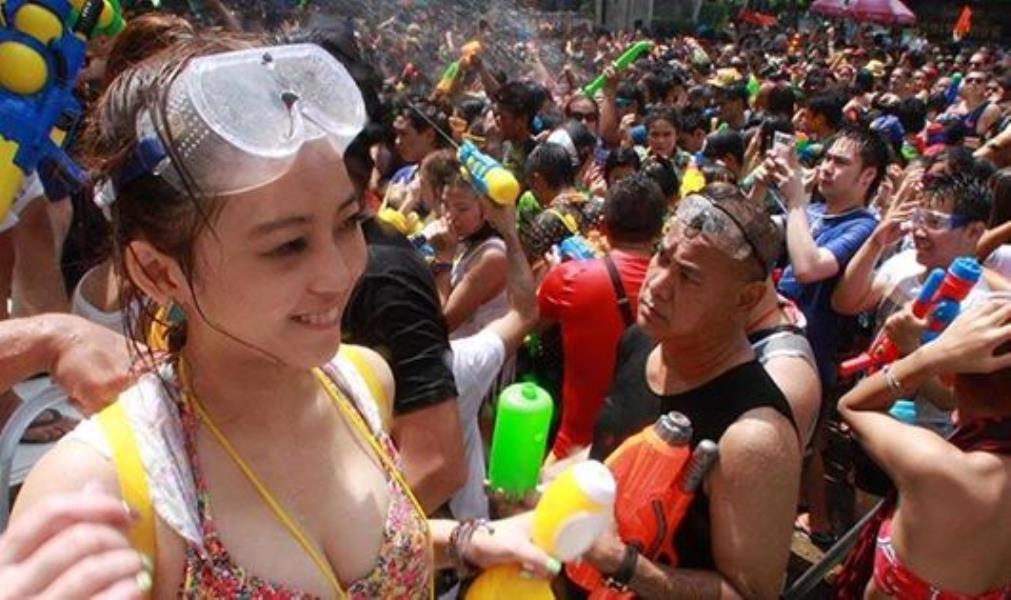 Deriving from the Sanskrit language, the word Songkran means to pass or to move into. In this context, the meaning implies to the passing and the moving of the sun, the moon and the other planets into one of the zodiacal orbits. And the Grand Songkran Festival which falls in Aries indicates the new era of the Thai New Year. Owing to the ancient Indian belief, the Grand Songkran Festival is most appropriate to be the Thai New Year due to the timing of the best season which is known as the spring of India which comes right after the cold season of winter. Also, there are other aspects supporting this belief such as blooming flowers, the fresh atmosphere of nature and the livelihood of all living creatures. 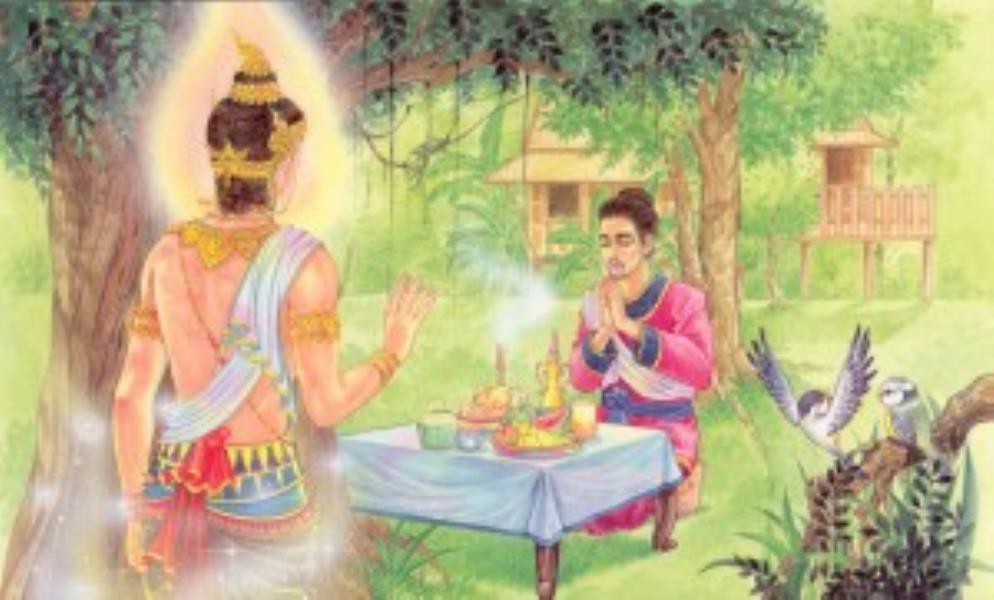 With the great influence from the Indians, the Songkran Festival portrays the typical ways of life of the Thais which involve the agricultural aspects. Free from their regular routine work, the Thai citizens will find time to perform their annual rites of showing respect to their ancestors. The highlight of the festival will include the younger Thais paying respect to their elders by sprinkling their hands with scented water. And in order to welcome the New Year, the celebration will include the delightful colourful local entertainment, which in fact, suitably unites the mutual relationship between members of the family, society, nature and the surroundings. Therefore, this Songkran Festival has proved to be the most important and grandest festival of the year. Moreover, our neighbouring countries such as Myanmar, Cambodia and Lao PDR. have also organised this type of festival.

During the Sukhothai period, the Songkran Festival was practised both in the royal court palace and among the ordinary citizens. However, the size of the celebration was not as elaborate as of today. Back in those days, civil servants and other government officials would pay homage to the king, and would drink the oath of allegiance to the king or the government, while the king would provide an annual salary to all officials. Later on in the Ayutthaya period, the festival was expanded by including the bathing of the Buddha image.
Also, the festivities would include the forming of sand pagodas and entertaining celebrations.

Nowadays Thai's will walk the streets having 'water fights' using containers of water or water guns, or stand at the side of roads with a hose and soak any one who passes by. 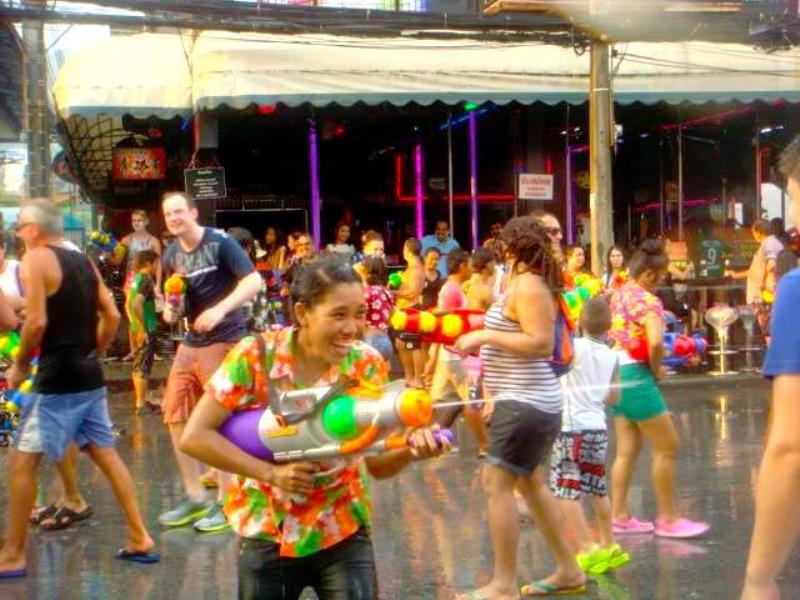 You may also get covered in chalk, a custom originating from the chalk used by monks to mark blessings. This combination of water and powder is almost identical to the celebrations of Holi, and indeed, it maybe that the customs originated in India as certainly Songkran is celebrated more widely and longer in the Northern part of Thailand. 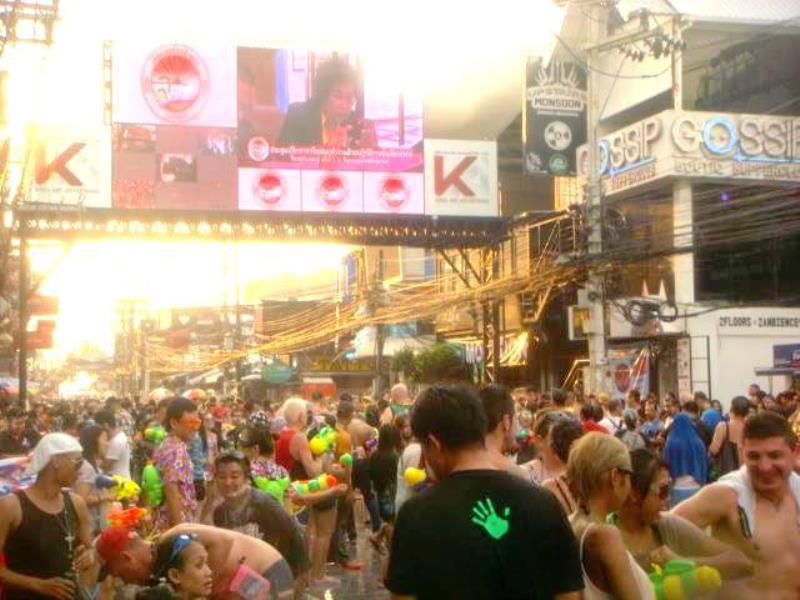 Even more interesting is that the custom of water fights pops up in a distant place at the same time of year. Dyngus Day is celebrated on Easter Monday in Poland, and on the Monday the custom is that boys get to soak girls with water, but on the Tuesday, the girls get to throw crockery at the boys - again the water and powder combination. 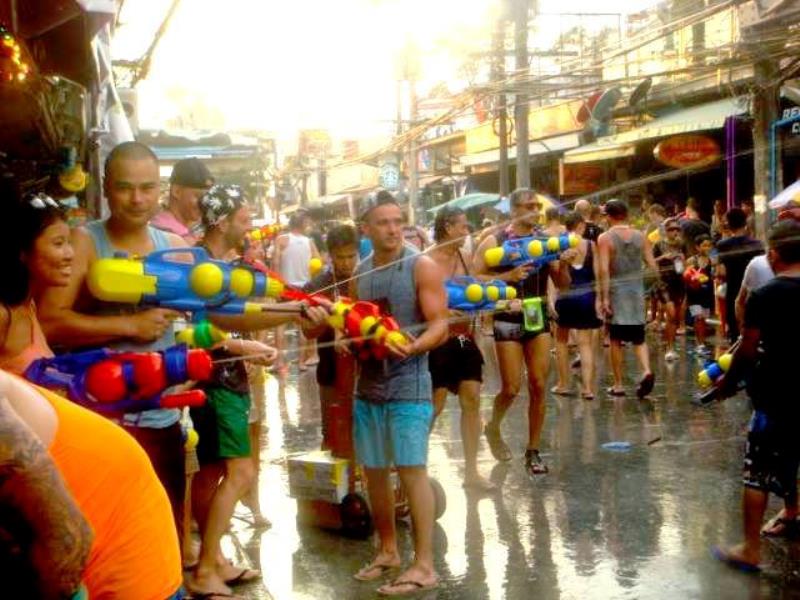 As mentioned, Songkran is a Spring Cleaning Day, both physically and spiritually. On the physical side, in addition to cleaning other customs are that anything old and useless must be thrown away or else it will bring bad luck to the owner. On the spiritual side, some people make New Year resolutions. 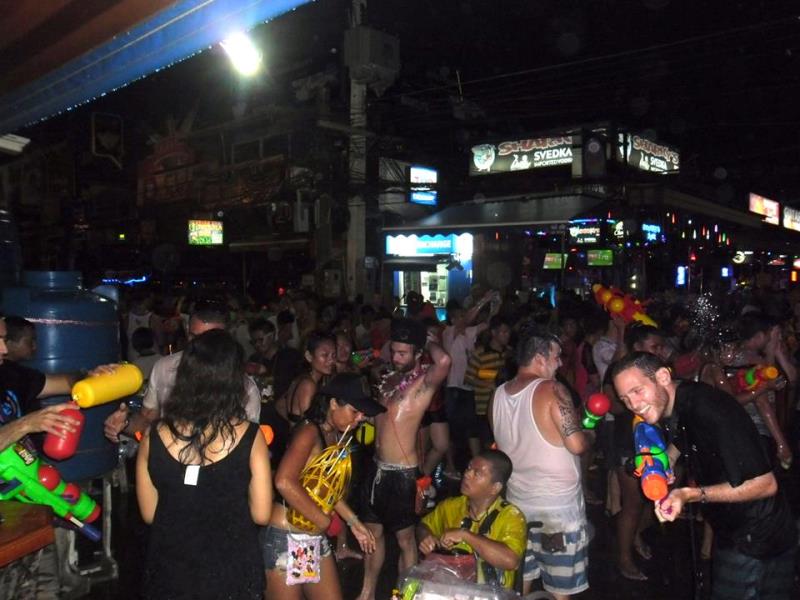 So as you can see that this festival that draws such a large number of people to phuket thailand each year is not a new thing at all. It still has its original meaning of out with the old and wash away all mistakes of the past year. its a time for blessings and new starts. 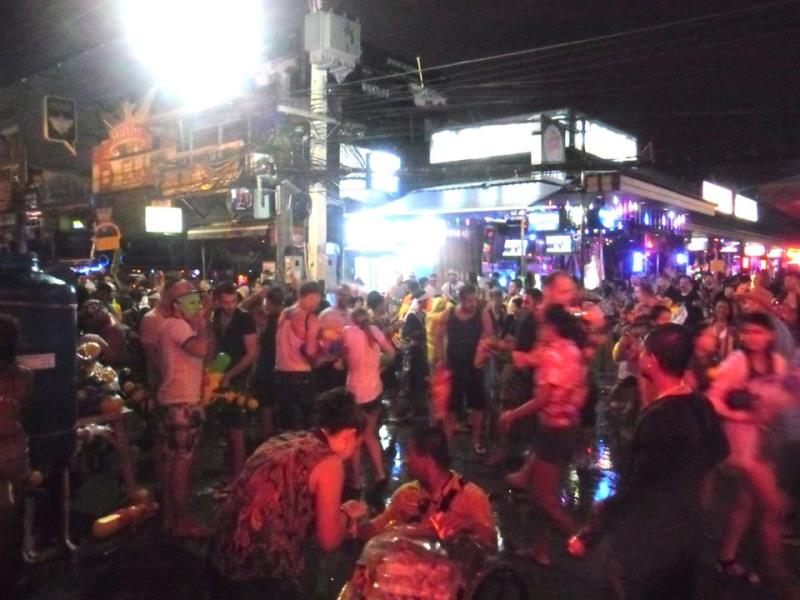 But like all things over the years it changes. We still have the days for the temples and family but the water side has become a bit more popular. Now its a time for a street party lasting 2 or more days and the blessings can be done en-mass with the aid of water guns and hoses to all within range or the water gun. You will find every shop, bar hotel will have water bins to refill your water gun. The water delivery trucks are on 48 hour shifts to keep everyone fully armed for as long as possible. 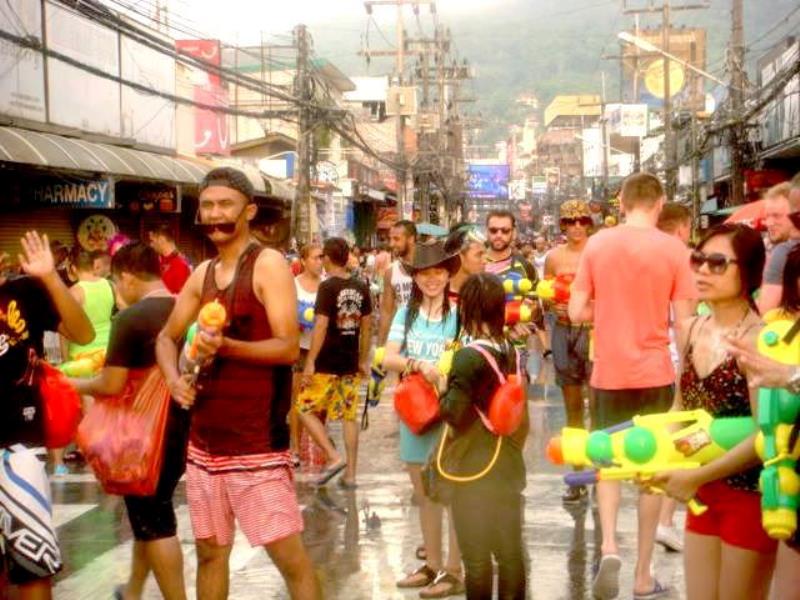 The best way these days to have fun is to walk everywhere as the roads can be a bit of a hazard with people blessing anyone who passes. On a motorbike for the less experienced can be a bit risky. Decide on where you ant to be for the festival and stay close by. Do not expect to stay dry. 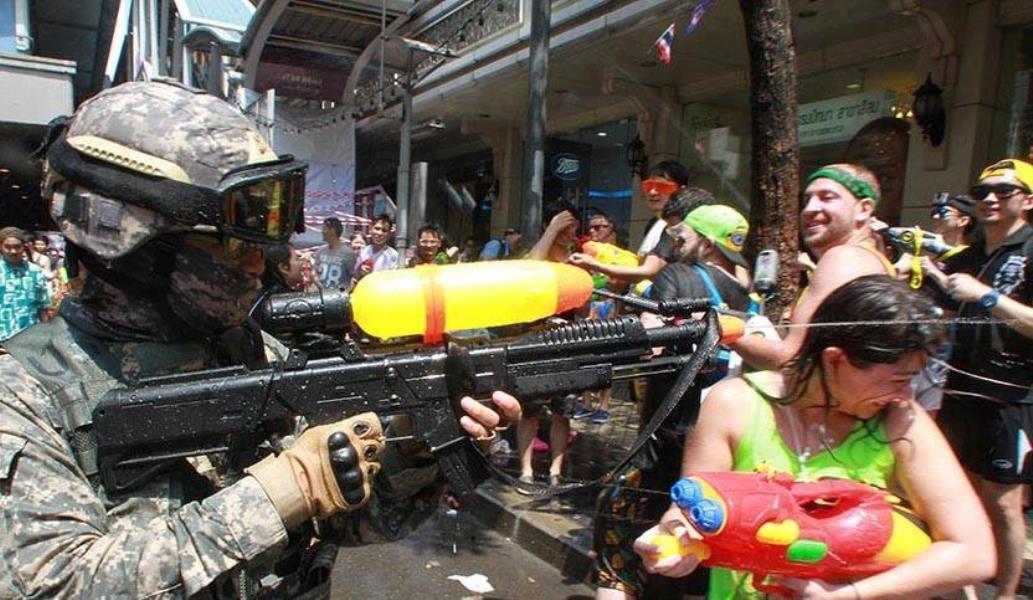 If you step outside you will get wet and just saying no will make you a bigger target. Even scubadiving in phuket takes a day or two off with most if not all dive centers and boat crews have a day off. If you are planning a trip to phuket scuba divingthen please remember that during Songkran you will not even need to go as far as the sea to get soaked. So to all that will be in phuket thailand happy Songkran and to those of you that have never been. Well people say Songkran in Patong make the carnival in Rio look like a village fete so hope to see you all in phuket thailand for Songkran next year. 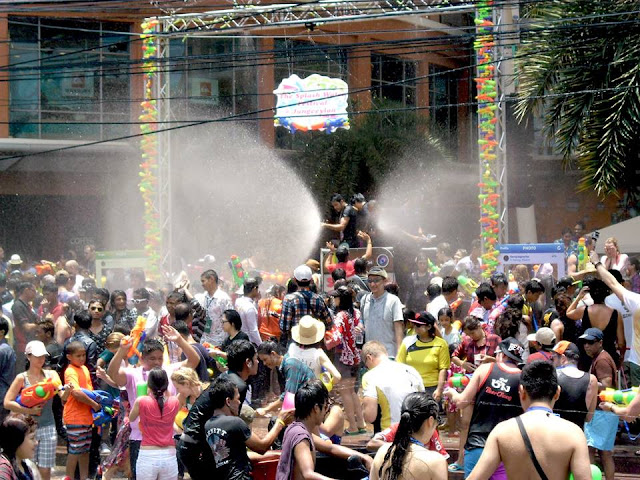