Home Charles Bird Articles Whale Watching in Phuket?? Could this be the newest Place to Go?
Published

Whale Watching in Phuket?? Could this be the newest Place to Go?

Phuket Thailand has always been known for some of the best diving locations of anywhere on Earth. The year round warm waters and great vizability makes it popular location for all levels of diver. Scuba diving in phuket means 20 meter vizability is the average and in high season then 30 - 40 meters is more what you can expect on many dive sites. The diving on the local day trips to places like Anemonae reef and shark point have great soft corals, large sea fans and such a diverse array of sea creatures all year round. From Tigertail sea horses, ornate ghost pipe fish, frog fish, leopard (zebra) sharks and if lucky the massive Whale shark. When in phuket scuba diving there is such a wide choice if you have the time. Liveaboards to the Southern Islands of Hin Daeng, Hin Muang, Koh Haa which offers diving as good as the more well known Similan islands but without the people. Phi phi slands with are a great all year round location to dive with hawks Bill Turtles and Black Tip reef sharks. Then Racha Noi with its 30 meter plus vizalility most of the year. From December till May then south tip of racha Noi is a popular spot to look for the giant oceanic Manta Ray, reef manta and the Whale shark. The Whale shark population has exploded in teh last few years from 2-3 sightings a year to several per week and now are spotted at all phuket scuba diving sites. Scuba diving in phuket has never been so good with so many spieces makeing a come back in numbers.

Phuket Thailand has also seen an increase of other creatures too. There is now and has been for almost 2 years now a large (and still growing) pod of Dolphins living off the east coast of Phuket and some more out be Phi Phi too. The bottle nose dolphin was a regular sight here for many years than about 8 years ago they all but vanished and nothing was seen of them for years. Then all of a sudden when diving off an island to the east of phuket named Mai Thon they were seen again. May be they were hiding there all along as very few boats went there but all of a sudden they have left the shelter of Mai Thon and spread all over the area. 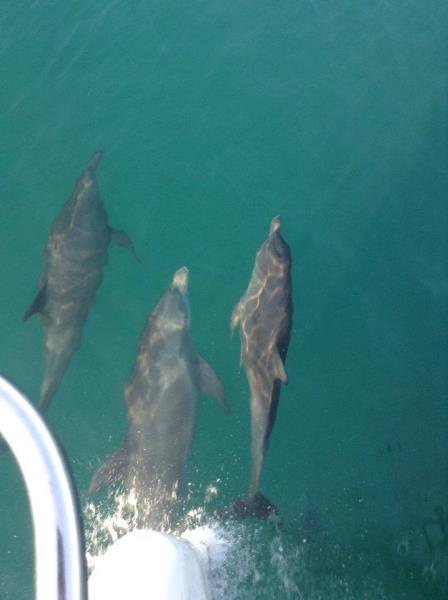 The other rare but not unknown sightings are of the odd Minke Whale or two per year. These were seen more often to the south of Phuket between Racha Noi and Racha Yai or out to Hin Daeng and Hin Muang to the South of Phi Phi. Again not often seen in the busier areas but they were still around. Now they are seen in pairs or small pods both around phuket and in the Similan islands. Many people now when diving in phuket have seen then. They are seen not by divers under the water but from the dive boats between dives. Now when scuba diving in phuket we can see great things without even getting in the water. 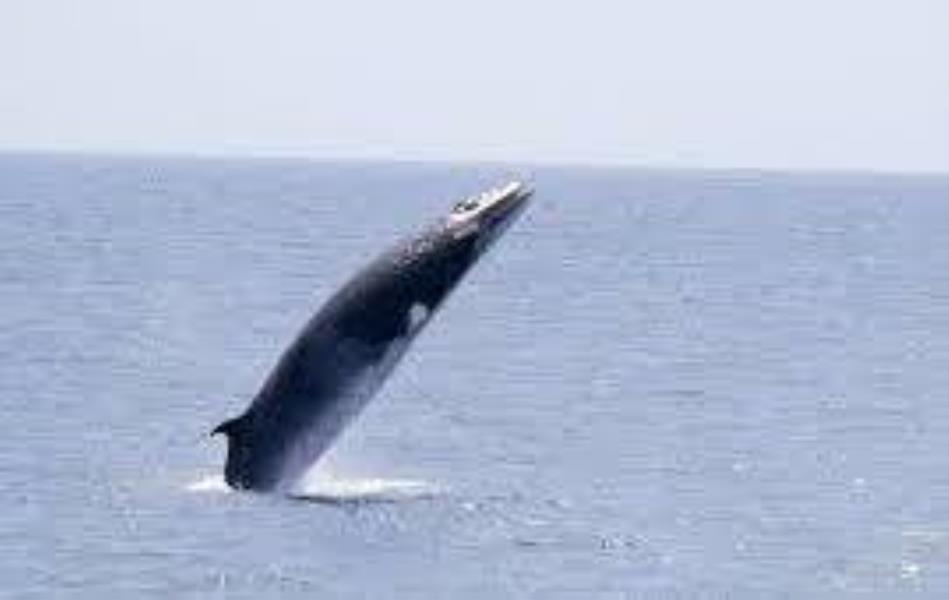 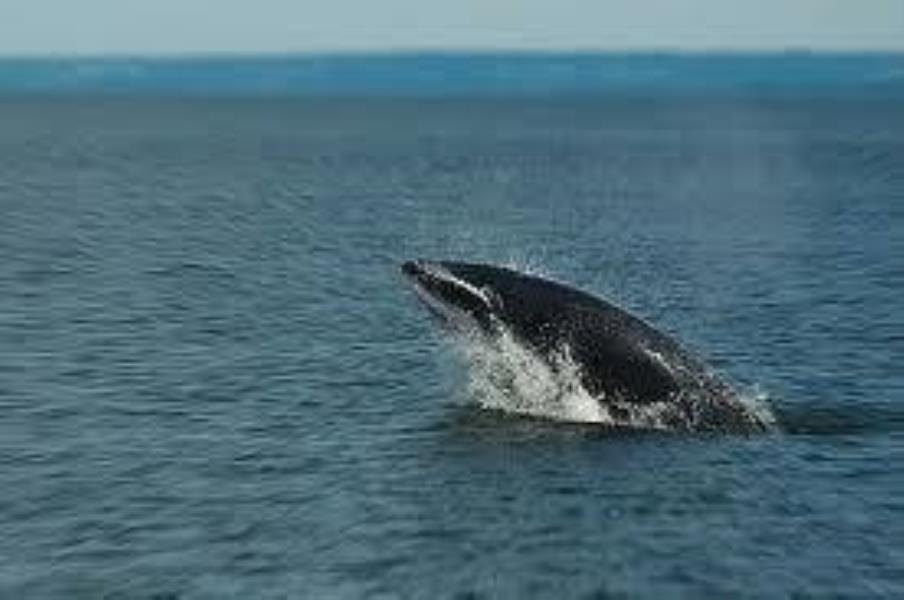 The minke whale is a black/gray/purple color. Common minke whales (Northern Hemisphere variety) are distinguished from other whales by a white band on each flipper. The body is usually black or dark-gray above and white underneath. Minke whales have between 240 and 360 baleen plates on each side of their mouths. Most of the length of the back, including dorsal fin and blowholes, appears at once when the whale surfaces to breathe.

Minke whales typically live for 30–50 years; in some cases they may live for up to 60 years.

The whale breathes three to five times at short intervals before 'deep-diving' for two to 20 minutes. Deep dives are preceded by a pronounced arching of the back. The maximum swimming speed of minkes has been estimated at 38 km/h (24 mph).

A slightly less common type of whale known as the Brydes whale. This is a warm water whale that only stays in warm tropical waters. Not too much is known of this whale and there seems to be severl differnt types or sub species. The whale breathes three to five times at short intervals before 'deep-diving' for two to 20 minutes. Deep dives are preceded by a pronounced arching of the back. The maximum swimming speed of minkes has been estimated at 38 km/h (24 mph). 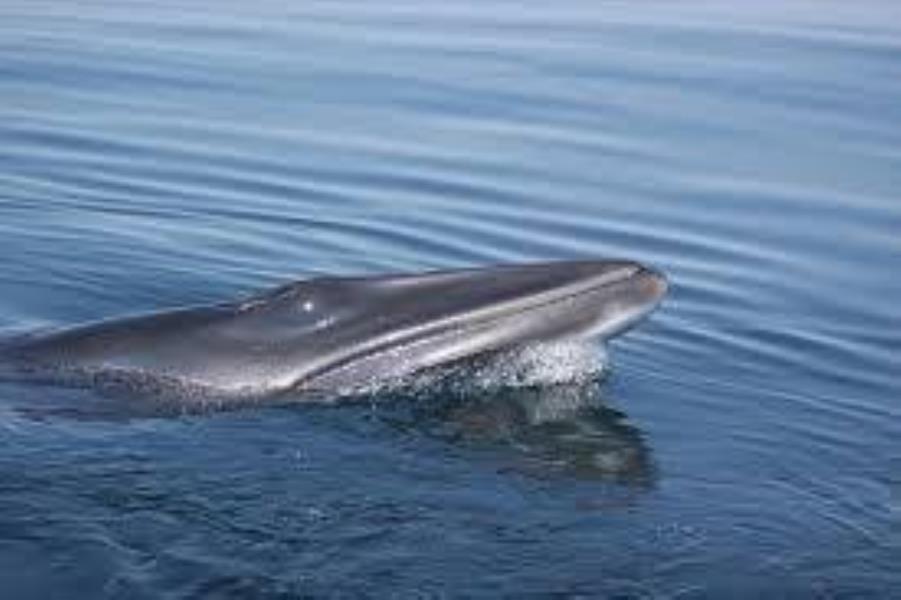 The Bryde's whale has three parallel ridges on the top of its head. It has between 40 and 70 throat pleats which allow its mouth to expand when feeding. As with some of the other baleen whales, the Bryde's whale primarily eats schooling fish and sometimes krill and other planktonic crustaceans. The Bryde's whale has a slender body which is smoky blue-grey in colour with a sickle-shaped dorsal fin. The body is often mottled with some scars caused by parasites and/or cookie-cutter sharks. The flippers are slender, pointed and relatively short - approximately one tenth of their body length. The broad, distinctive tail flukes are rarely seen above the surface.

The Bryde's whale usually feeds alone, though mothers and calves often feed together. It is known to make sudden changes of direction when feeding both on the surface and underwater. Sometimes inquisitive, the Bryde's whale can be seen approaching or swimming alongside boats. It has irregular breathing patterns, and will often blow four to seven thin, hazy spouts, followed by a dive, usually about two minutes long, although it is capable of staying below the surface for longer. They have also been see to blow or exhale whilst underwater. When surfacing between dives, the Bryde's whale rarely shows more than the top of its head.

These have been seen again around Racha Noi and again out in the Similans and up to the Surin islands and richelieu rock. They are quite fast swimmers but still a great sight to see. 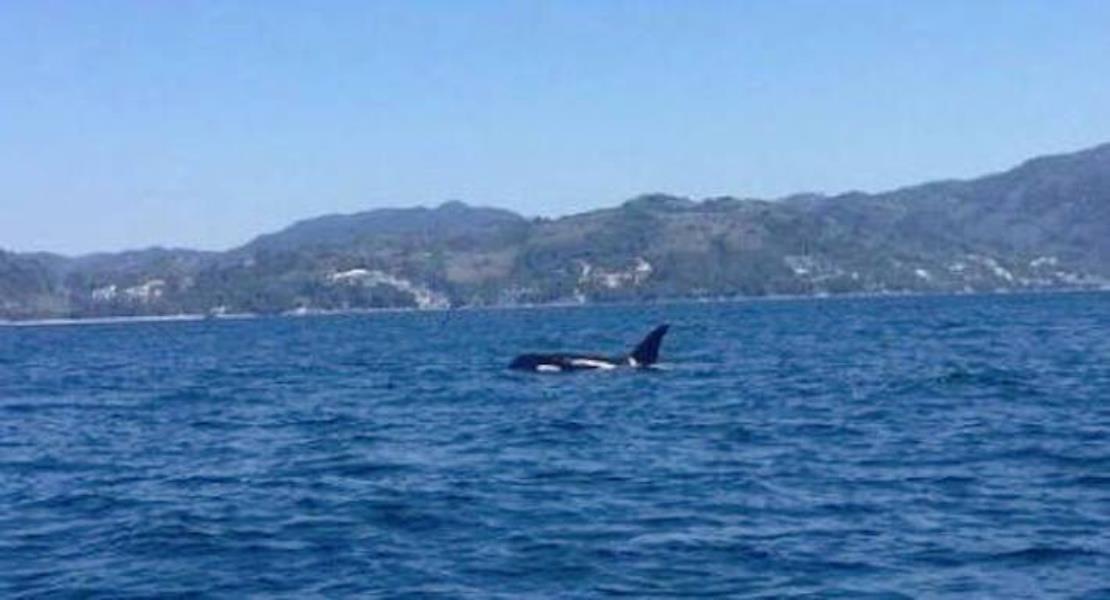 The latest guest to make an appearance in the warm tropical waters off phuket thiland is the Orca killer whale. This is really a member of the Dolphin family and some say gets its name of killer whale from the killer of whales. These huge animals have been seen in the past but not for many years. Then last December in the waters just off Koh Bon which lies just north of the Similan islands as the sun sank into the sea they made their first appearance in many years. A pod of four whales. Two young, a mother and another may be the male or an older larger calf. They picked their moment to show themselves perfectly. As the sun sank into the sea they started playing on the surface between then boat and the sunset making for stunning photos. 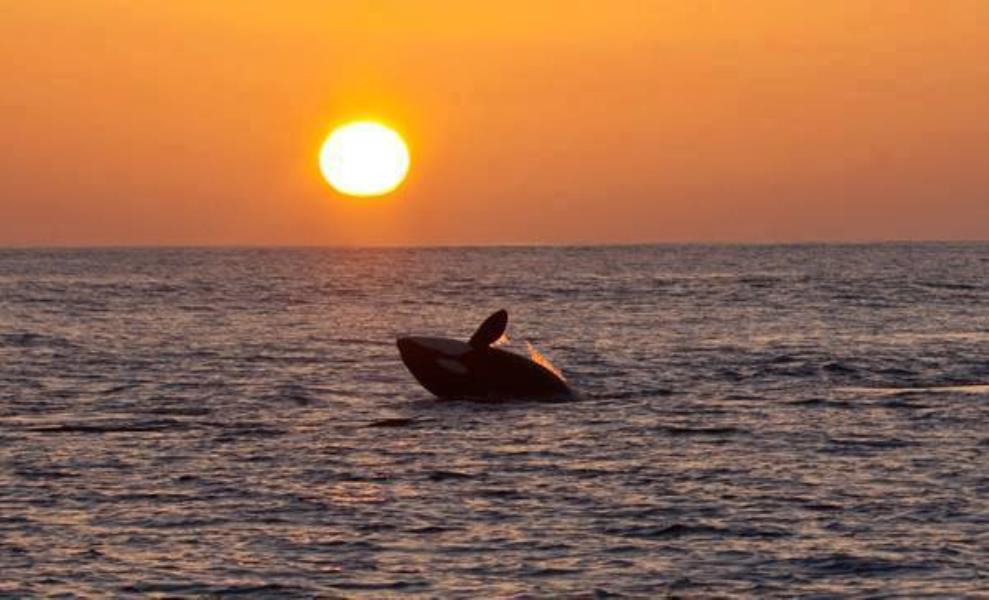 Then when December came round again people were on the look out to see if last year was a one off or may be just passing through. Nothing. Not a single sighting at any location anywhere around the Similan islands. Then in the busiest beach on the island on the busiest week of the year a huge Orca makes an appearance in the party town of Patong. Right in Patong bay with jet skis and longtails buzzing around swimming around quite happy. This to me was amazing as all the noise did not upset it or confuse it. Clearly seen from the Freedom beach and many people fishing. this really does look like the Orca's are here to stay. 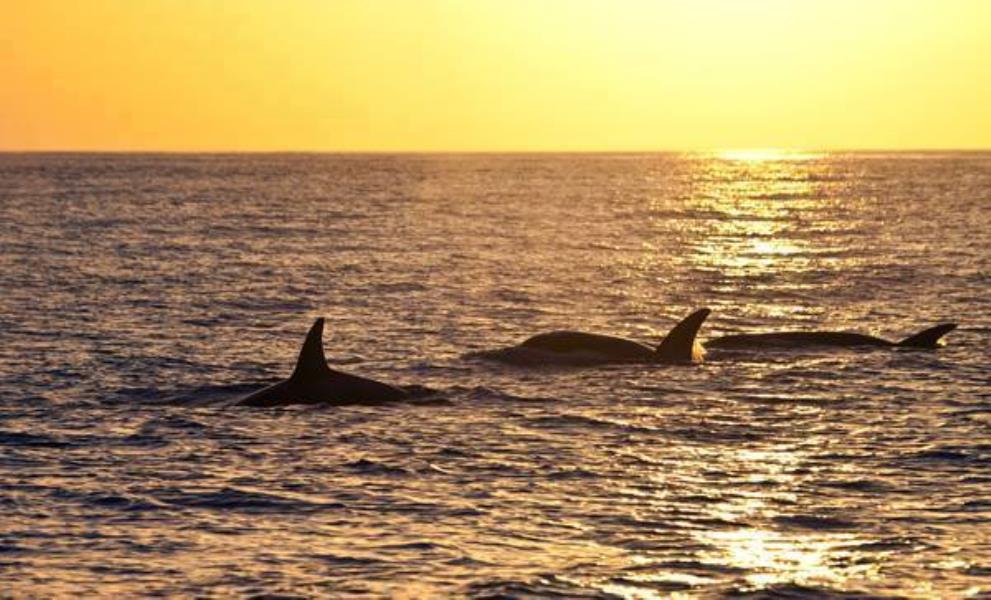 Then to a totally new whale for me. One I had never even heard of An omura’s whale, or dwarf fin whale, believed to be between 18-20 metres long was spotted off Freedom Beach in the same location as the Orca just a few days before, right in the middle of Patong bay. 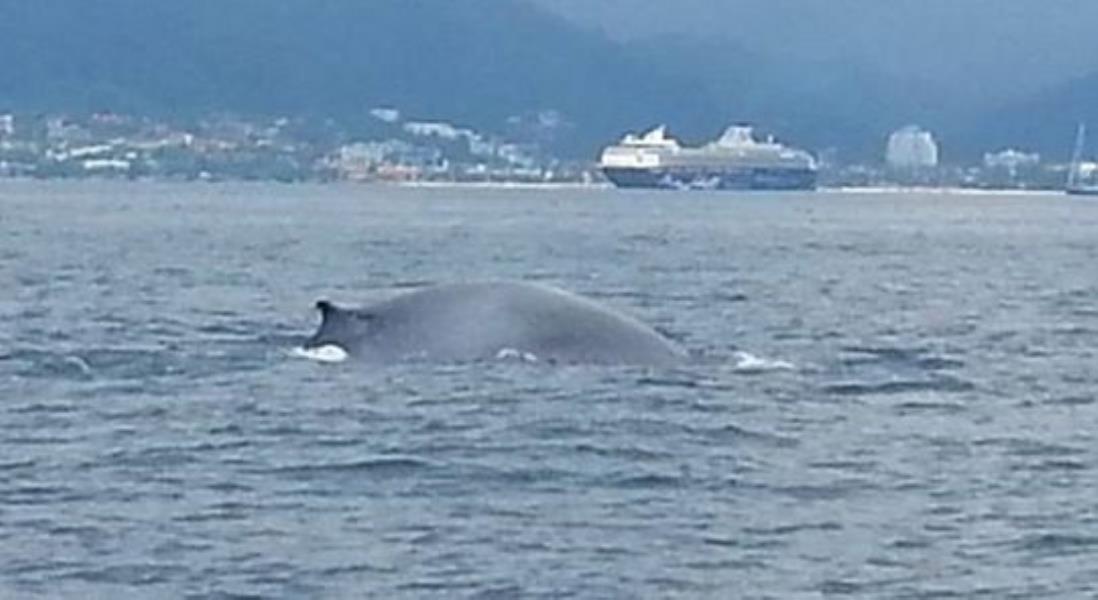 Omura's whales appear to be restricted to the shelf and deep waters of tropical and subtropical regions, with records from the eastern Indian Ocean which includes Thailand's ocean.

Kongkiet Kittiwattanawong of the Marine Endangered Species Unit said after seeing the photos, “This whale is an omura whale. One was seen previously off Koh Racha, but I am not sure whether its the same one or not. If the photo was clearer I would be able to tell,” he said.

“This species can be seen in the Andaman Sea and South China Sea, and there has been 33 recordings of sightings of omura whales in the Andaman and Gulf of Thailand.

Next to nothing is known about the behaviour of Omura's whales although from the few confirmed sightings they are thought to be found as solitary individuals or in pairs. From the presence of throat grooves it is known that like other rorquals, Omura's whales are lunge feeders and probably feed predominantly on schooling fish.

Then the other neww player in the seas around phuket thailand that we must all keep an eye out for when scuba diving in phket is Cuviers beaked whale. Again this was a new one to me also. But I have been shown by a customer an awesome photo of one breaching the surface. 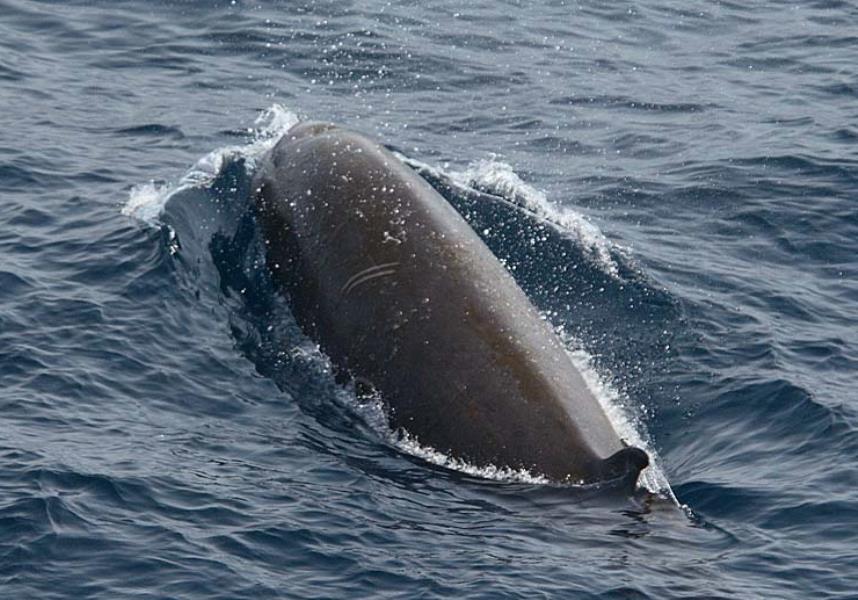 Cuvier's beaked whales although similar in appearance to many other beaked whale species, can be identified from their robust shape, short beak and unique colouration. Body colour is dark grey to light rusty brown whilst the head is substantially paler, almost white. There is also a distinct 'dip' between the melon and the body. Older males tend to lighten in colour and become more heavily scarred with age and some animals can be seen with a light orange-coloured sheen to their skin, thought to be caused by diatoms. Adult males also have one pair of small teeth visible at the front of their lower jaws; these teeth do not erupt in females or calves. All animals have a curved mouthline, giving the appearance of a ‘smile'. Flippers are small and rounded and tucked into the ‘flipper pockets' when the animal is diving. The small dorsal fin is set two-thirds of the way back along its body. As with other beaked whales, there is no notch on the fluke.

Cuvier's beaked whale is a deep diver, regularly diving to depths of 2,000 metres or more where they hunt and feed on squid, some fish and crustaceans. Group sizes are small (perhaps 2-7 animals), but lone animals are often seen. Little is known about the animal's social habits. Cuvier's do not bowride but will occasionally breach. 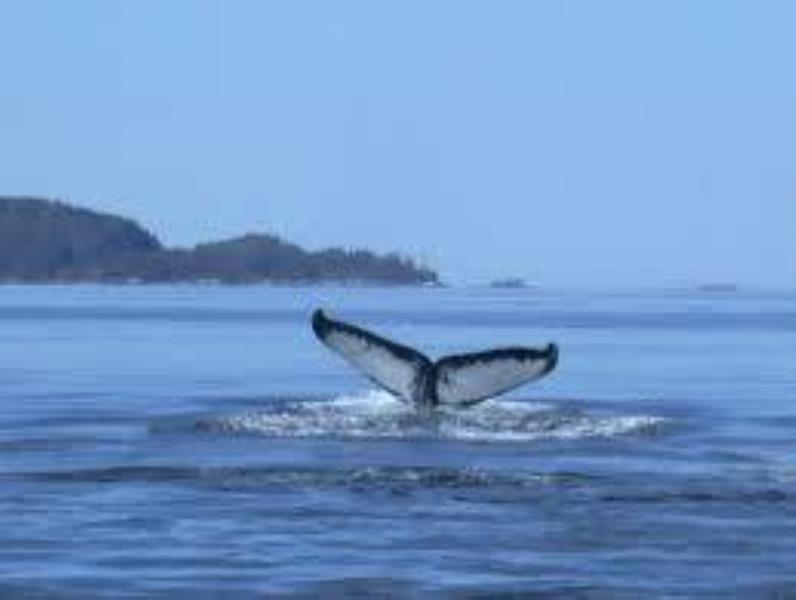 So as we can see that in the last year or two the waters off phuket thailand have seen a huge increase in amazing creatures both in numbers and in types. Scuba diving in phuket has always been amazing but now can we see the birth of whale watching too? I am no expert but I can not imagine that there are too many other locations where you can see 5 types of whale and even see Orca's from your hotel balconay or beachside bar. The key to this will be to keep the jet ski and other speed boats away to keep the noise down. Once these whales get settled they will produce a huge income from the tourists who travel the world whale watching. Hotels, guest houese all along Patong bay will gain custom as will the longtail boats who can all go whale watching. it wont be just scuba diving in phuket that will benefit but the whole tourist insustry. So much can be gained if these animals can be allowed to stay and the key to this is the noise from the jet ski and the other speed boats. This time the whole area can add a new attraction to activities to whats available with oit anyone spending a penny. Can phuket thailand be the new whale watching mecca? 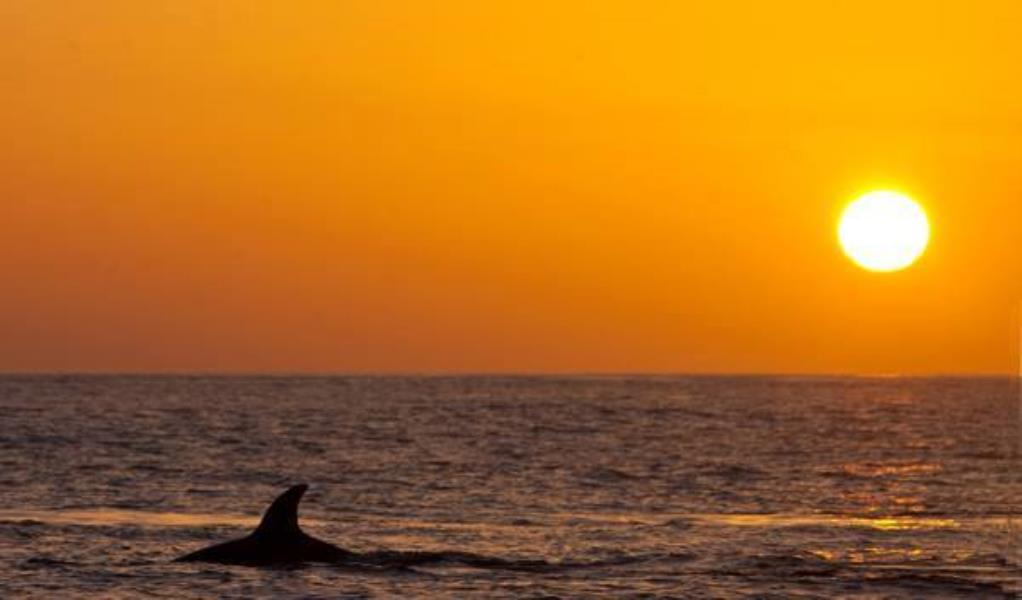