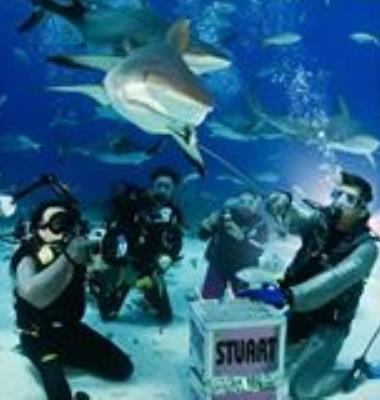 Stuart Cove's Dive Bahamas is Nassau's leading full service dive resort. Originally opened in 1978, the operation has grown to a fleet of seven dive vessels, with five of the boats over 40 feet in length. Located on the southwest side of New Providence Island, Stuart Cove's is in the ideal physical location to take advantage of the diverse underwater geological formations. As such, dive sites are available for divers with no experience all the way up to expert-level dives including four new shipwrecks we have helped place in the last two years.

A wide spectrum of diving activities is available. Holiday travelers who have never gone diving before will enjoy the 3-hour "Learn To Dive Program". In this program guests will be introduced to the equipment used in the sport of diving in a swimming pool, receive an introduction into the basics of diving theory, and then complete their first ocean dive. All of this is done under the supervision of a professional dive instructor who is working exclusively with a small group of guests.

Experienced divers can participate in up to 5 dives a day. Two dives are offered in the morning, with two additional dives in the afternoon. An optional night dive is available on selected evenings as well. Dive sites encompass steep vertical walls that plummet to 6,000 feet of depth, shallow tropical reefs, 13 different locations containing ship or airplane wrecks, and numerous locations that were used as underwater movie sets for feature films.

The feature activities at Stuart Cove's for our divers are our "adventure dives". These consist of our Shark Adventure and Wall Flying Adventure programs. The Shark Adventure program is a 2-tank dive trip that takes divers on an underwater encounter with Caribbean Reef Sharks. On the first dive divers participate in a "free swim" with the sharks along a beautiful wall. On the second dive, the group forms up in a semi-circle on the 50-foot bottom and watch while a professional shark feeder enters the water with a box of bait. Upon reaching the bottom, the feeder begins feeding the sharks with the aid of a pole spear. To say the sharks come close to the divers is an understatement - they are everywhere!

Our Wall Flying adventure is equally fun. In this program divers utilize a fleet of underwater scooters to explore the expanses of underwater walls formed by the Tongue-of-the-Ocean trench that runs 120 miles long and 24 miles wide. Diving as a group - divers utilize the scooters to travel at speeds up to 2.5 knots underwater. During a typical Wall Fly divers cover roughly 2 miles underwater. During this time the support boat follows the divers bubbles and picks them up as they surface.

However, Stuart Cove's is not exclusively about diving. It's about sharing the underwater world with as many people as possible

Snorkel Bahamas offers Nassau's visitors the opportunity to see the underwater delights of the island first hand. Billed as the worlds most exciting snorkeling adventure, Snorkel Bahamas offers its guests the chance to visit 3 locations on a single voyage. The first underwater stop is a shallow reef that is teaming with fish. Armed with a little fish food - they will be swarming all around the snorkelers. At the second location snorkelers visit a shipwreck. This could be a 200-foot tanker sunk as an artificial reef in 2000 that rests in only 40 feet of water with its mast reaching up to only 8 feet below the surface or one of the wrecks used to make the 007 films "For Your Eyes Only" and "Never Say Never Again". Finally, if the weather permits, and your fellow passengers have the nerve - our optional 3rd site - takes divers to shark-infested waters where a bait box is lowered into the water. Those who are able to overcome their fears can snorkel above the sharks and observe their natural beauty and grace as they circle around the bait box suspended below. Those who choose to remain on board will still be able to observe the animals as well, without getting wet.

SUB Bahamas is Nassau's newest underwater activity. Your personal SUB (Scenic Underwater Bubbles) looks somewhat like a motorcycle with a giant bubble on top. Passengers sit on the "bike" with their head inside the bubble. Fresh air is supplied by scuba equipment that is on board the SUB. Utilizing a boat custom built to support a fleet of 12 SUB units, passengers are taken to a beautiful shallow reef. After a brief orientation on piloting a SUB, the SUB staff escorts guests to a depth of 20 feet. From there, guests are free to pilot their sub around the reef observing the underwater world on the same level as the fish. The beauty of SUB diving is that you can wear your normal eye glasses, you don't even have to know how to swim, since all you are doing is driving an underwater motorcycle, and you breath normally since there are no hoses or tubes to breath through!

Fin Photo is Nassau's only full service digital underwater photography and videography service. Located on the docks of Stuart Cove's, the staff at Fin Photo document the acts of courage, family fun, and underwater life for the guests of the various Stuart Cove's activities. All Shark Adventure dives and SUB dives are video taped. Other activities are documented on film. Guests are then invited to view their DVD and images after returning to the docks. Copies of DVDs and digital images are available at a nominal fee. In addition, Fin Photo offers a complete line of batteries and rentals of underwater cameras and accessories. The six full time photo pros also offer underwater photography and videography classes for guests.

Finally, Stuart Cove's Underwater Productions keeps life on the docks interesting and exciting. This division of the company offers marine location production work for photo shoots, television commercials, television documentaries, and feature films. High profile publications ranging from Playboy to Forbes have shot photo spreads on the docks and in the water. Great White Paper Products, Carnival Cruise Lines, and Renault have all filmed commercials with the help of Stuart Cove's. If it is a network documentary featuring diving or sharks then they've probably covered Stuart Cove's - ABC, NBC, CBS, CNN, TDC, and the BBC have all been there - many more than once. Feature films call for beautiful underwater and topside island locations. Many of them also call for dangerous underwater stunts to be performed. Both are offered at Stuart Cove's. Our feature credits include 3 Bond Films - "For Your Eyes Only", "Never Say Never Again", and "The World Is Not Enough". Our recent feature jobs include "Spy Kids", "Deep Blue Sea", and "Speed 2". Other notable feature jobs include "Splash" and "Cocoon". The 1995 film "Flipper" staring Paul Hogan and Elijah Woods was filmed completely on location at Stuart Cove's.

Stuart and Michelle Cove, high profile figures in the dive community, are two of the most personable and genuine people you will ever meet. Stuart frequently is on the docks to meet divers when the boats return. Michelle, who has been featured as model and stunt extra in numerous productions, often helps coordinate the dive boats and is actively involved in making sure everyone has a great time when they visit the operation. With so many things happening, it's a tribute to their dedication to quality and service that all of the Stuart Cove attractions continue to be sought after by the public, the media, the industry and just about anyone else looking for aquatic fun and adventure in the Bahamas.

The Bahamas Review text is required Review etiquette
Review rating is required
Please try to be objective and avoid using personal interactions as the basis for a positive or a negative review. Any professional members using the service to gain a competitive advantage over their competitive will be banned from the service.
At least one dive site or dive shop is required for review Add Media Done 0 selected
Tweet