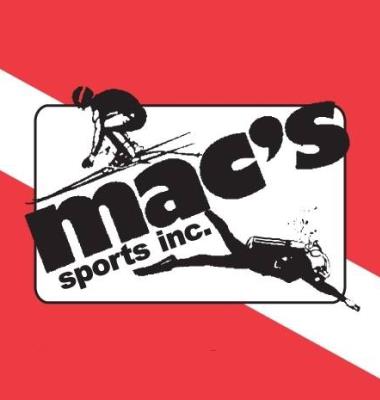 No dive logs have been tagged to Mac's Sports Inc. yet. Would you like to be the first?

Back in 1938, this was the only place on Clearwater Beach where you could get groceries, magazines, newspapers, tobacco, beachwear, fishing tackle, soft drinks, candy, almost everything! “It was like an early 7-11″, says Ruth Johnson, “At least we were open from seven to eleven and sold most anything we thought people would want”.

They also rented bicycles and fishing gear! Called simply the “Beach Store” and located on Mandalay Avenue, it opened the same year as the hamburger stand which became the Pelican Restaurant. Ruth and Carroll Johnson, newly arrived from Birmingham, Alabama, started the business and, as Ruth reports, “worked very hard to make sure it would succeed”. It cost a whole $500 to set up this business on the beach where the existing businesses were limited to the Pelican, the Palm Pavilion,

Langford’s Service Station at the end of the causeway, a seafood market where the King Cole Motel now stands and not much else. Langford’s had something brand new that the tourists really like. It was called a “self-service” laundry where you could pay to do your laundry in machines.
After the births of their two sons, the Johnsons moved to New Mexico. “Mac” McCarthy purchased the Beach Store and renamed it “Mac’s”. During WWII, it was a favorite shopping place for the young people of the beach because Mac made sure that what few candy bars and Coca-Cola he could obtain were set aside to be sold only to youngsters. Returning from New Mexico six years later, the Johnson’s went back into the grocery business and, eventually, they purchased the little store back from Mac McCarthy and this time they bought the building. Their son, Jim Johnson, eventually turned it into Mac’s Dive Shop before his sports business outgrew the small building and he moved it to the mainland.
Brian Grindey purchased Mac’s Sport in 1998 from Jim Johnson after working and managing the store for 25 years. The Grindey Family are the current owners of the historical and successful dive shop.